The surprising Polars get the No. 2 seed Trojans on Friday while the Skippers play the always-strong Wildcats. 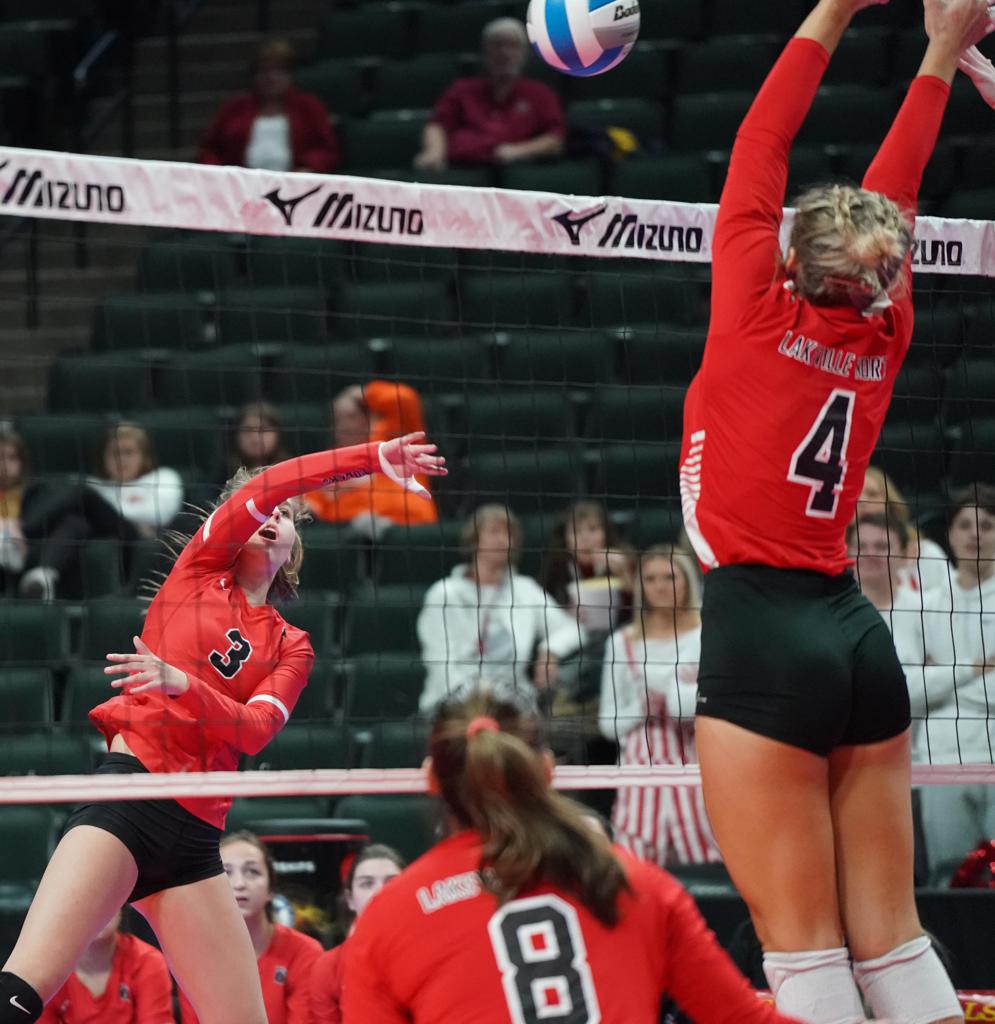 There were no nerves. None that you could tell, anyway.

North St. Paul showed no stage fright on its first venture into the state tournament spotlight, sweeping a three-set victory from No. 3-seeded Lakeville North 25-21, 25-22, 25-19.

Where nerves were expected, confidence shown through. Instead of jitters, there was jubilation. The Polars played the match with a brash bounciness that was evident in their play.

“A lot of us before today were very anxious,” said senior hitter Lauren Stenman, who led the team with 23 kills, many of them the no-doubt variety. “We just wanted to play today exactly the way we did in the section final against Stillwater.”

A match they also won, emphatically.

Coach Stephanie Blanda has nurtured the Polars’ fun-loving, no-regrets style. They sing and they dance and they enjoy their time together, on and off the court. They brought every bit of that energy to Thursday’s match. 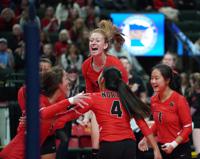 “I think they danced off the anxiousness before they got to the court,” Blanda said.

“We had group singtime,” chimed in libero Jenna Rubbelke.

“Group sing-time and group dance time,” Blanda added. “That helped to get everybody excited. So the confidence, when we walked out there, you could tell it was strong.”

They parlayed that confidence into a forward-looking effort that never seemed to lack for energy. Even when Lakeville North would make a run, North St. Paul would have a fearless response, refusing to be rattled.

“There were moments where were down a few points and getting a little frustrated, but we knew that if we were frustrated, we weren’t going to win,” Stenman said. “So we pushed it off to the side.”

“They showed a strong steadiness that we didn’t bring,” Lakeville North coach Jackie Richter said. “North St. Paul pressured us and dictated the way the personality of the match went.” 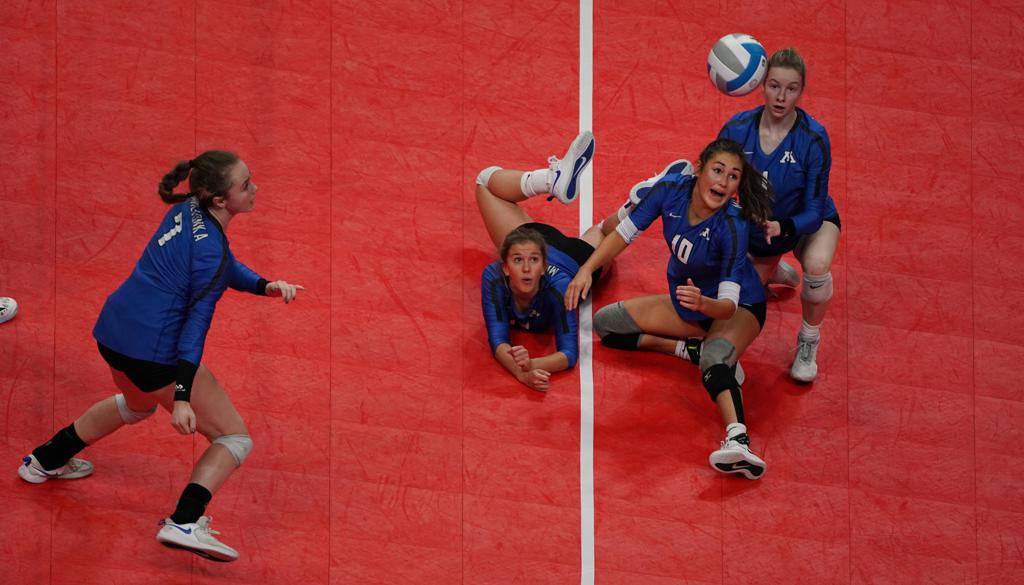 It’s not a game-plan Minnetonka coach Karl Katzenberger would draw up, but for his Skippers, a little adversity proved exactly the ingredient they needed.

The Skippers lost the first set of their quarterfinals match to Moorhead and trailed late each of the ensuing three sets only to pull out victories in each en route to a 21-25, 26-24, 28-26, 25-23 triumph.

“They respond to being backed into a corner,” Katzenberger said.

“Once we start getting down, it’s definitely a motivator for our team,” senior outside hitter Skyler Germann said. “We have players that come in with intensity and they just rev it up for the team.”

The last time the Skippers were in the tournament was 1976, a drought that may have contributed to their first-set lull. They trailed 23-20 in the second set, but strong front-row play from Germann and Kali Engeman, who had two kills and a block, led to a 26-24 victory.

Things looked even worse for Minnetonka in the second set. Moorhead controlled play from outset and built a 24-17 lead, but the Skippers, as was the M.O., responded.

“One step at a time,” Germann said. “If you look ahead and say, like, ‘We need six points,’ it gets to be too much. We just had to stay focused on one point at a time.”

In the fourth set, Minnetonka trailed 22-18. By this time, however, a come back seemed almost expected.

They got it behind strong serving by Engeman, who served five consecutive points, and some errors by their now-rattled opponents.

“We felt a little bit of that choke-hold setting in,” Moorhead coach Char Lien said. “If we would have found that one big hit, that one big dig, that might have been enough to calm us down a little bit.”

Germann led the Skippers with 23 kills, while Engeman had 15 kills and four blocks. 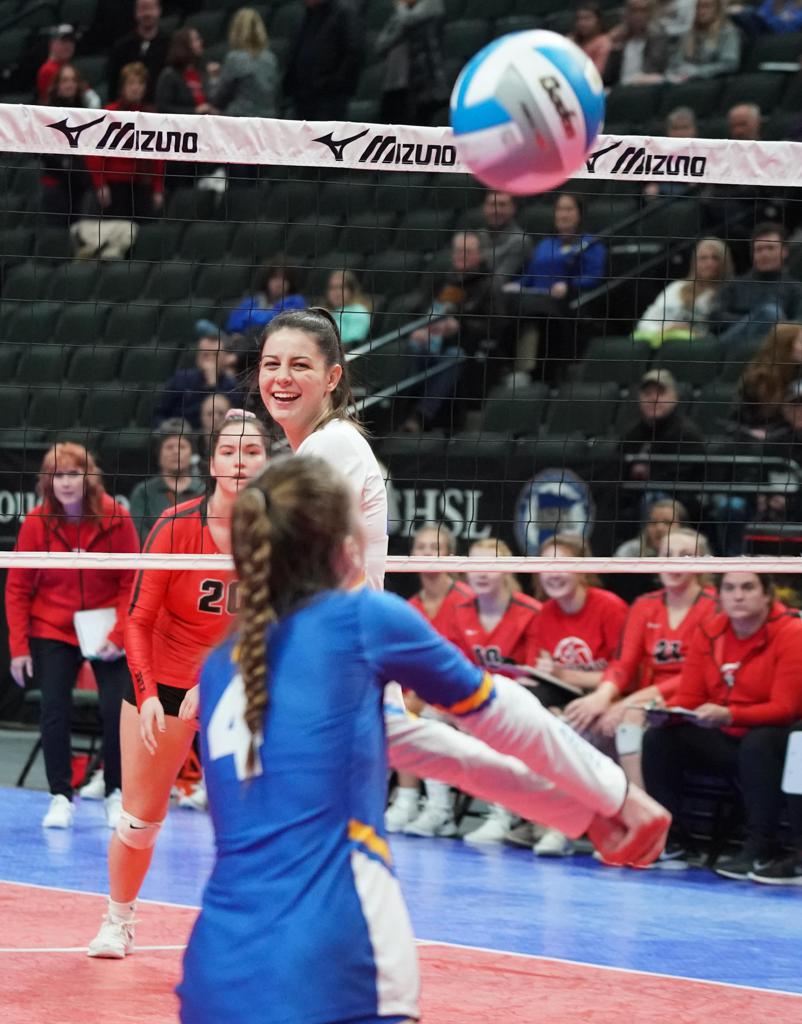 Wayzata coach Scott Jackson thought his team played its best match of the season in its Section 5 championship victory over St. Michael-Albertville.

And, he added, the Trojans had their best practice of the year Wednesday. The rest of the Class 3A volleyball field can now say they’ve been put on notice.

“This does not feel at all like we are finishing,” Jackson said. “It feels like we’re climbing. So that’s a lot of fun.” 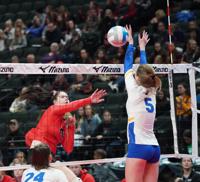 Sophie Jesewitz had 13 kills, Elizabeth Helmich added 11 and Kate Long chipped in with nine for Wayzata, which finished with a hearty .341 attack percentage. Setter Olivia Johnson was the catalyst, distributing 33 set assists.

Wayzata trailed 9-7 in the first set, but settled in and reeled off nine of the next 10 points to take control of the set.

Elk River battled gamely in the second set and took a 22-21 lead. But Wayzata rallied again, with Jesewitz getting two kills and a block in a 25-23 result.

The Trojans ran out to a 7-0 lead in the third set and cruised to victory.

“In the second set, we got challenged with some big points we had to find our way through,” Jackson said. “That’s going to serve them well Friday.” 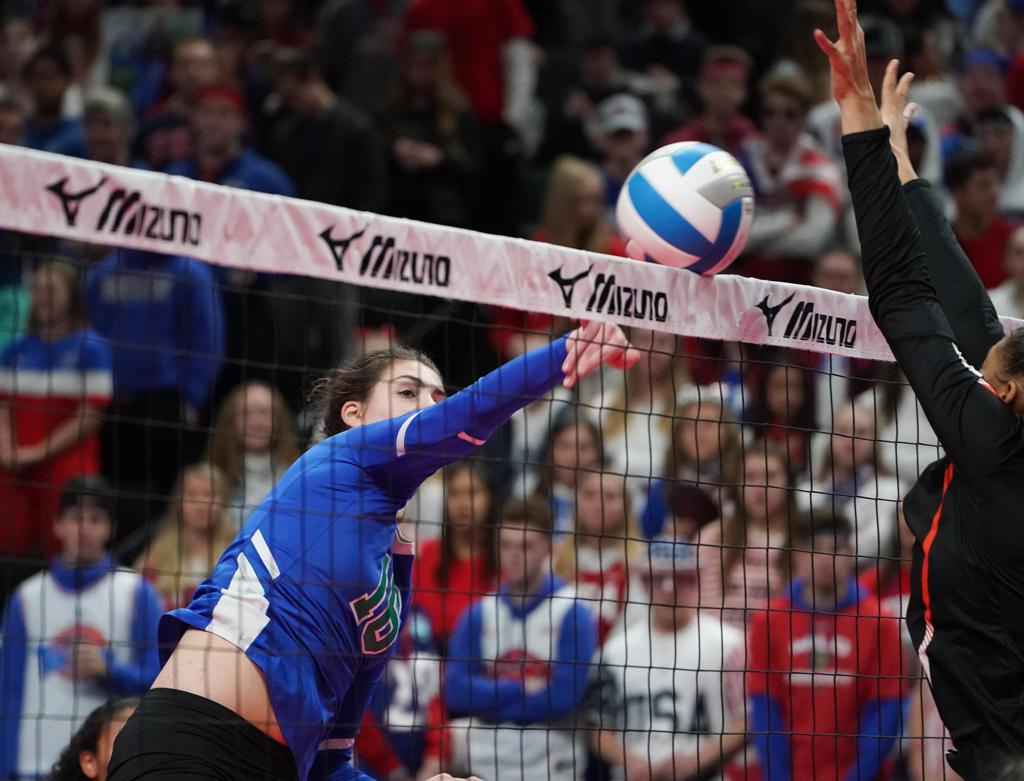 Wildcats too much for first-time entrant Orioles

With Eagan making its seventh consecutive state tournament appearance and with three Class 3A championships in tow, expectations follow the team wherever it goes.

But here’s the big news: The Wildcats, despite their gaudy reputation, get tight and nervous in big situations, just like everybody else.

“I thought we were tight,” Eagan coach Kathy Gillen said. “For some reason, we were tight and a little bit nervous.”

The Wildcats know that their reputation precedes them wherever they go. Their response?

“Everybody knows Eagan volleyball and we have a high reputation,” senior Christine Jurgens said. “We just have to try to put it out of our heads.” 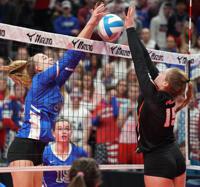 They may have seemed tight to Gillen, but Eagan looked comfortable to the untrained eye. Junior setter/hitter Kennedi Orr had 15 kills and 23 assists. Sienna Ifill had 10 kills to lead Eagan, which won with a relentless offense and depth that St. Louis Park simply couldn’t match.

“We are deeper than we have been,” Gillen said. “With some other teams, when their best players go to the back row, that’s when we can go on a run. We don’t have that problem with this group.”

For St. Louis Park, its first state tournament experience clearly didn’t go as hoped. But the Orioles were thrilled with the experience and what it portends for the future.

“Just five years ago, St. Louis Park volleyball was only recording two wins,” coach Whitney Meierotto-Simon said. “Just to be representing the school in the tournament, we are so excited and proud to be here.”