See which athletes were honored from this year's Class 3A, 2A and 1A state tourneys. 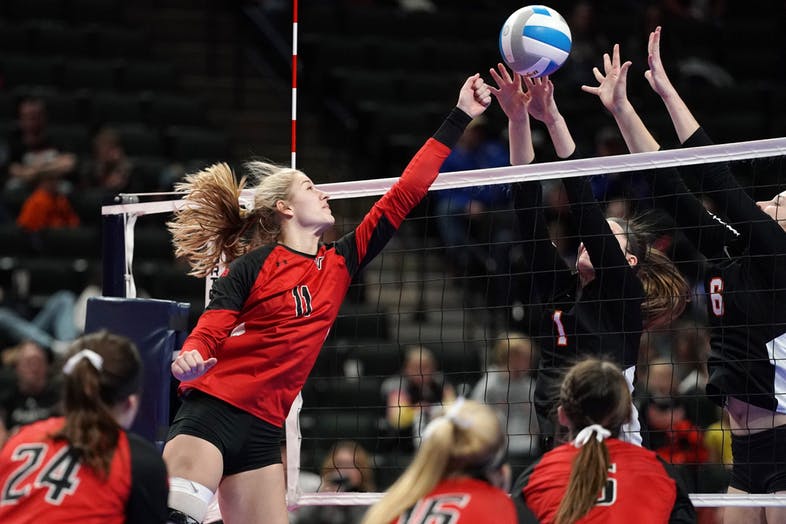 North Branch's Cianna Selbitschka (11) knocks the ball over the net against Marshall in the Class 2A state championship. Selbitschka was one of three Vikings named to this year's Class 2A all-tourney team. Star Tribune photo by Anthony Souffle

North Branch won the Class 2A state title with a five-set victory over Marshall last Saturday but each club received three selections on the Class 2A all-tournament team.

The fourth-seeded Vikings, who defeated North Branch 3-0 in a state tournament semifinal a year ago, showed resiliency in this year’s tourney after a runner-up finish at state in 2017. Against the third-seeded Tigers, North Branch was buoyed by junior Cianna Selbitschka and her match-high 25 kills. The outside hitter was named an all-tourney selection along with teammates Paige Sheehan, a sophomore setter, and junior libero Kylie Kline.

Paige Andries, a junior middle hitter, had 13 kills for Marshall in the state championship match and is joined on the all-tournament team by teammates Bria Morris and Mia Schnaible, who are both juniors.

Top-seeded Kasson-Mantorville was eliminated by North Branch 3-2 in the semifinal round. The KoMets had two representatives named to the all-tournament team in senior outside hitter Peyton Suess and junior middle hitter Emilee Terry. The KoMets swept Concordia Academy in the state consolation game to claim a third-place finish. Taylor Brunn, a senior defensive specialist, was the lone Beacon honored at this year’s tourney.

Champlin Park claimed four of the 10 spots on the Class 3A all-tournament team after knocking off perennial power Eagan 3-2 in the Class 3A championship match. The Rebels’ Izzy Ashburn, Jordan Stalpes, Emma Schmidt and Kaitlyn Weimerskirch get to enjoy their all-tourney hardware while their school celebrates winning its first-ever state championship.

This year’s all-tournament teams, presented by the Minnesota State High School League and Wells Fargo, were selected by a panel of coaches who attended the tournaments at Xcel Energy Center.

Scroll down to see tables of who was selected to the all-tournament teams for each class.