The Rebels won the first two sets but the Wildcats rallied to tie the match, setting up an intense final set. 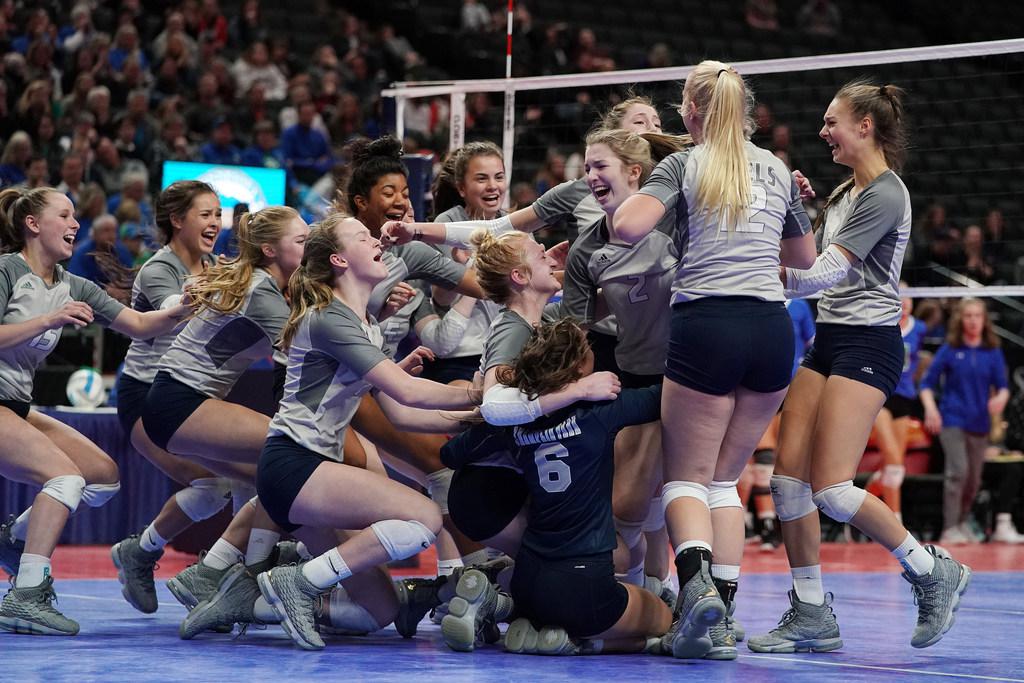 It was the ending the high school volleyball world wanted to see. And it proved worthy of every expectation.

Champlin Park, arguably the deepest team in Class 3A, outlasted Eagan, the most state-tournament tested team in the field, 25-18, 25-18, 21-25, 22-25, 15-12.
The match ebbed and flowed, darted and dipped, with momentum switching its allegiance repeatedly throughout the match.

“That was probably the match everybody was hoping for,” Champlin Park head coach John Yunker said. “Hats off to Eagan. They’re a great team.”

Champlin Park came out firing in the first set, blazing to a 5-0 lead. It was a margin the Rebels never relinquished, controlling the action to win it 25-18.

Eagan appeared to correct itself early in the second set, but back row mistakes -- passing and serve receive -- continued to show through.

Much of that was due to Champlin Park’s varied attack. Setter Izzy Ashburn, who finished with 57 set assists, conducted the Rebels offense with a maestro’s touch. She rarely set the same attacker twice and kept the Eagan blockers guessing. Champlin Park rolled through the latter half of the set to take another 25-18 victory.

Things got tighter in the third set as it became Champlin Park’s turn to show cracks in its exterior. Eagan exploited the Rebels’ errors, cutting the deficit to 2-1 with a 25-21 set victory.

The fourth set was notable as much for its drama as its quality of play. The two teams took turns taking one-point leads, only to see the other strike back. Eagan took control late in the set, scoring the final three points. The last came on a kill down the line by superb sophomore Kennedi Orr for a 25-22 victory, setting up the winner-take-all fifth set.

“Our defense got better,” Eagan coach Kathy Gillen said. “Finally, they were scrambling a little bit more than we were.”

Champlin Park took a four-point lead early in the final set, leaning on the powerful arm of hitter Lauren Clark. The Rebels maintained that lead, building it to 12-8, before Eagan once again rallied. The Wildcats cut the margin to one point, 12-11, but that was as close as they would get.

Champlin Park won three of the last four points, the final coming on a service error by Orr, triggering an emotion-laced pile of Rebels in the middle of floor.

“I wouldn’t expect anything less,” Gillen said. “We knew they were good. I’m glad we came back and won a couple, but I expected a battle.”

Being the first team in school history to win a team championship added a little luster to the Rebels’ victory.

“I think it would feel this great anyway, but, at the same time, to have the school on our backs like this just makes it even better,” Ashburn said.

Libero Kaitlyn Weimerskirch said, “It was a lot of pressure going into it because we wanted to do it for our school,” she said. “Being able to accomplish our goal, finally, feels amazing.”

It’s the the first state championship in the school’s 27 years history.

Eagan turned the tables in the third and fourth sets, cutting down on its errors and taking advantage of Champlin Park errors to square the match at two sets apiece.

The drama continued in the fifth set. Champlin Park built a 12-8 lead, but Eagan again battled back, cutting the margin to one. That was as close as the Wildcats would get as Champlin Park scored three of the last four points.