Boys' volleyball gets a foothold among Minnesota high schools

Backed by two Minnesota volleyball stalwarts, 21 schools around the metro have formed teams to play this spring. 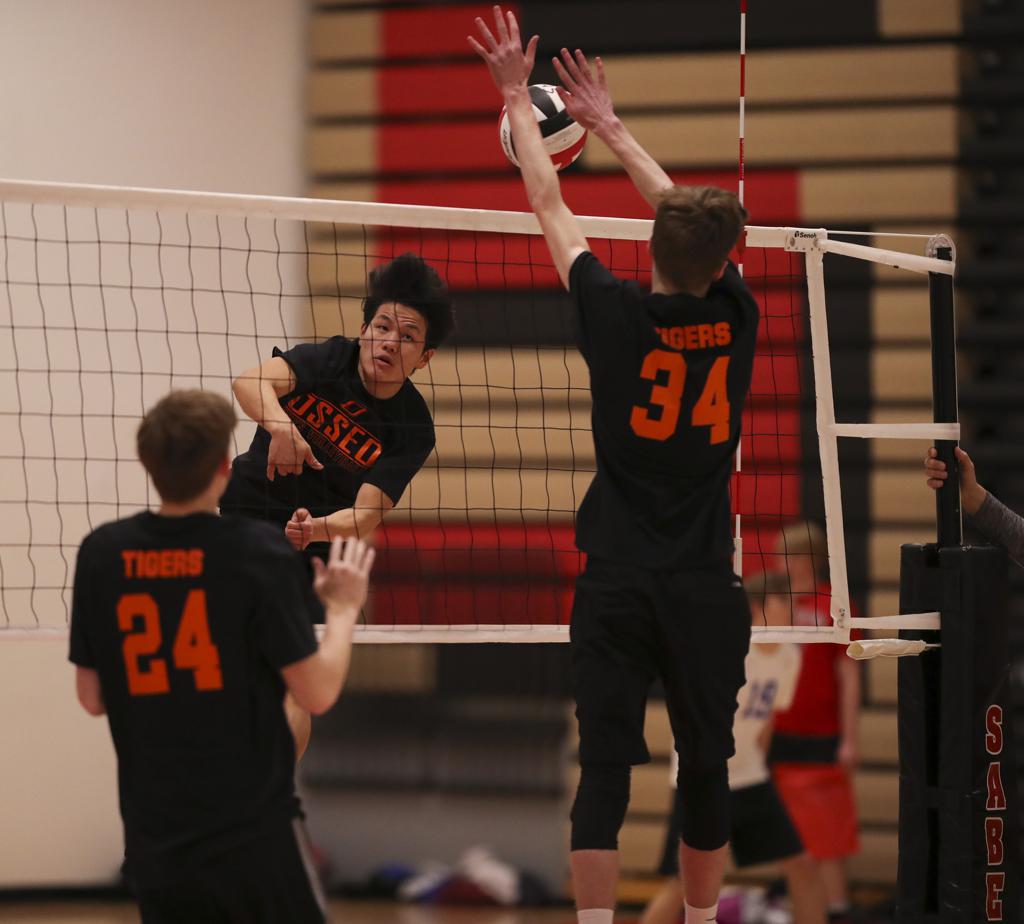 Growing up in a volleyball family, Chris Kilkelly developed skills. He knew about each of the positions, their roles and their purpose, and became a pretty fair setter while helping older sister Rachel practice her attacks.

“I was in the gym with them pretty much my whole life,” the Shakopee freshman said. “It was kind of a competition between me and my sister.”

So it’s no surprise that Chris came to love the sport. Problem was, his time as a volleyball player ended when the impromptu practice sessions ended. Volleyball competition for boys was not offered in Minnesota schools and was restricted to a few random club teams.

The Minnesota Boys’ High School Volleyball League kicked off its first season of play April 9 with 39 matches at five school gyms around the metro area. The league has 21 schools and 38 teams, counting JV, with more than 400 boys on their rosters.

“Hugh and I were talking about Minnesota being such a big volleyball state and he asked me, ‘Why hasn’t boys’ volleyball ever caught on here?’ ” Weaver recalled. “He’s a two-time Olympic medal winner. I told him, ‘If you want to get behind this, let’s give it a shot.’ ”

Weaver, who coached Apple Valley and Lakeville North to girls’ volleyball state championships, had been a promoter of boys’ volleyball since his early days as a coach and teacher at Rosemount in the 1970s. But it never gained traction.

Two generations later, volleyball has the largest number of participants of any girls’ sport sponsored by the Minnesota State High School League. To Weaver and McCutcheon, the times seemed ripe to give boys’ volleyball a try.

“It’s a logical extension of volleyball in Minnesota,” said McCutcheon, who coached the USA men’s team to Olympic gold in 2008 and the USA women to a silver medal in 2012.

McCutcheon pointed out that successful women’s collegiate programs tend to come from states that also have a thriving boys’ volleyball scene.

“There are only two or three NCAA champions that don’t also have a men’s program,” he said. “There’s a great synergy that ends up being created.”

It’s a long way from a casual conversation about starting a boys’ volleyball platform to actually building one.

For that, Weaver and McCutcheon turned to a pair of Shakopee volleyball junkies — girls’ assistant coach Krista Flemming and Jenny Kilkelly, (mother of Chris and future Gopher Rachel, now a senior at Shakopee). They jumped at the chance.

“Our stands [at Shakopee girls’ matches] are always packed with boys,” Jenny Kilkelly said. “They’re always asking ‘Why don’t we have boys’ volleyball?’ ”

While Weaver and McCutcheon spread the word, Flemming and Kilkelly spent six months developing a plan and building a base.

“Our vision for the spring was just to get the boys on the court,” said Kilkelly, a former player at Lakeville and the University of St. Thomas. “We weren’t trying to be super-structured. Our goal was to introduce boys to the sport and make it fun and competitive.”

When they put the word out that they were planning a boys’ volleyball league, the response was much stronger than anticipated.

“When the signup went up in the Lakeville North lunchroom, close to 90 kids signed up. Shakopee, 100. Lakeville South, 75,” Weaver said. “Not all of them went out [for the volleyball team], but that interest was there.”

Having McCutcheon as a backer has boosted interest in the league.

“To have support coming from a coach who has been very successful in all of his USA Volleyball platforms, it’s a driving force,” Kilkelly said.

The league plays matches each Monday, with various schools around the metro hosting teams that compete in a pool-play format. (Cancellations caused by the weekend blizzard have forced them to add some Wednesdays games.)

“We’re still having schools contact us about putting together a team,” Kilkelly said. “It’s a little late for this year, but they’ve talked about next year. So many people came out of the woodwork and wanted to be part of this.”

The strong relationship between high school and club teams in Minnesota has been a major factor in the sport’s overall health.

That’s why the success of this high school venture is of keen interest to club teams across the state. North Country Region Volleyball, which oversees amateur volleyball in the upper Midwest for USA Volleyball, partnered with the boys’ league to provide insurance coverage for players.

“That was our biggest hurdle,” Kilkelly said. “It makes it cost-effective and easy for boys to afford it.”

The payback is expected to come in the form of increased club enrollment.

“There’s such a great pool of athletes in Minnesota,” said Gintas Garsys, a coach with the Minnesota Select volleyball club who is also helping coach the Osseo boys. “Having this will feed the club side. This is only going to help grow the sport in the area.”

The ultimate goal is to have the high school league approve boys’ volleyball as an official league-sanctioned sport. Last October, a proposal to add boys’ volleyball was made to member schools and region committees. It didn’t receive enough support to be forwarded to the league’s representative assembly, but supporters believe it’s only a matter of time before it’s added.

“Our goal is to have it added by 2020,” said Weaver, acknowledging his timeline is optimistic. “It’s going to explode. It draws you in.”

Shakopee senior Brody Luce also grew up with volleyball-playing sisters and plays libero for one of Shakopee’s two varsity teams. He was hooked from Day 1.

“I always thought it was one of the more fun-looking sports to play, but it was a girls’ sport and you just had to accept it,” he said. “When it was announced there would be a team, I was amazed. This is so much fun.”

Chris Kilkelly, who sets for one of Shakopee’s JV teams, thinks the sport is taking off.

“It’s already caught on,” he said while watching competition in the downtime between his teams’ matches. “There’s a lot of people talking about it.”