3A: Eagan, Champlin Park, Roseville, Prior Lake advance to semifinals

Photo gallery: Quarterfinal matches (photos to be added during the day) 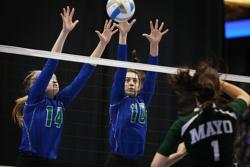 No. 2-seeded Eagan advanced to the Class 3A semifinals without a senior on its roster.

“Chronologically our age is young, but our volleyball age is not,” said Eagan coach Kathy Gillen after the Wildcats defeated Rochester Mayo 3-1.

Gillen said most of her players have been to state before. Junior Brie Orr is making her third state appearance.

The novelty of going to state hasn’t worn off, according sophomore outside hitter Ally Murphy.

Eagan’s motto this season has been “Play as a family.” This motto helped calm the nerves of the team in their victory over the Spartans.

A family dynamic also helped seventh-grader Kennedi Orr adjust to her first time at state. Orr's older sister, Brie, is on the team. Brie and other older teammates have been helpful, Kennedi said.

“She has the most beautiful hands next to her sister,” said Gillen, “and she did a great job responding to drills that got her game speed up to a varsity level.”

Eagan will play No. 3-seeded Champlin Park in the semifinals.

“If we stick to our game plan we can do it,” Gillen said.

Junior setter Brie Orr led the No. 2-seeded Wildcats with a triple-double of 17 kills, 23 assists and 15 digs.

Numerous hitting and serving errors by Rochester Mayo made it a quick set one for Eagan.

Rochester Mayo stepped up its defense in the second set, accumulating 26 digs in a comeback 26-24 victory. Junior outside hitter Kate Holtan led the Spartans with 19 digs.

The sister combo of Kennedi Orr setting older sibling Brie kept the Wildcats on top through the third and fourth sets. Kennedi Orr finished with 16 assists and 9 digs. 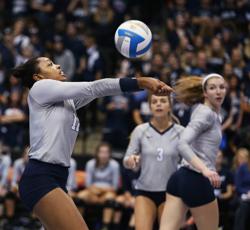 Jenae Alderson of Champlin Park digs out the ball in a quarterfinal match against North Branch. Photo: Leila Navidi * leila.navidi@startribune.com. (click on photo to see more)

After Champlin Park’s 25-19, 25-9, 25-15 victory over North Branch, the radiant smile that is Jenae Alderson’s trade mark was visible throughout the Xcel Energy Center.

Alderson, a senior outside hitter with who possesses some pretty impressive hops, had five of her 10 kills in the first set, helping the No. 3-seeded Rebels through some first-set jitters. Important, because it was nerves that contributed to Champlin Park’s five-set, first-round loss in 2014.

“Last year was more about settling the nerves,” Alderson said. “This one was more business. We knew what to do. Last year, our goal was getting to state. This year, we have a bigger goal in mind.”

After a closer-than-hoped first set, Champlin Park rolled through the second and third sets, with Alderson and junior hitter/setter Sydney Hilley leading the attack. Hilley, the Star Tribune Metro Player of the Year, finished with 13 kills, two set assists and four solo blocks.

Yet Champlin Park coach John Yunker credited Alderson’s leadership -- and her smile – as being a big part of the victory.

“She’s just an amazing player and a great leader,” Yunker said. “She’s leading all the time. Obviously, you see her physical talents. And that smile. You can’t help but smile every time you look at her.”

Star Tribune 2015 Metro Player of the Year Sydney Hilley had 13 kills and Janae Alderson had 10 for the Rebels, who were consolation champs in 2014.

North Branch was led by senior Courtney Selbitschka, who had 10 kills. 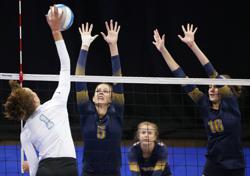 As he was getting into bed Wednesday, Prior Lake coach Mike Dean’s thoughts turned to the movie “Hoosiers.” His Lakers might have been the No. 1 seed in the Class 3A volleyball tournament field, but they also were making their first trip to the state tournament. That kind of new experience has been known to play havoc with even the best of teams.

“They were a well-oiled machine,” Hopkins coach Vicki Swenson said. “They really have no weaknesses. And that wasn’t our best effort, either.”

Prior Lake readied itself for the tournament by playing one of the state’s most difficult schedules. Its four losses were to teams ranked in the final top 10 in Class 3A. That experience paid dividends Thursday.

“I think there was a little bit of nerves at the start, but I think we turned that into excitement and went out and played our game,” said senior outside hitter Ella Francis, who led the Lakers with 11 kills and 13 digs. “It was really cool, walking out into the X, with your fans and all of the bands. It just added to the excitement.”

As well as Prior Lake played, however, Dean insisted there is still room for the Lakers to get better.

“I know we can play better,” Dean said. “There are definitely things we can clean up and I hope we can.”

Prior Lake may have been making its state tournament debut, but the Lakers looked like seasoned veterans, defeating Hopkins in straight sets, 25-14, 25-17, 25-11. Ella Francis had 11 kills for Prior Lake and Anna Martin chipped in with 9. 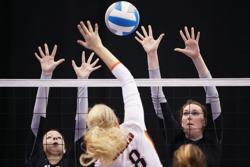 Cassie Finegan (left) and Kailey Beer of Roseville go up for a block against Brianna Carney of Moorhead. Photo: Leila Navidi * leila.navidi@startribune.com (click on photo to see more)

The fourth-seeded Raiders advanced to the semifinals for the second consecutive year, defeating the Spuds 16-25, 25-19, 25-19, 25-22, but it took a shaky first set to get Roseville moving.

“I think we were still over at the Holiday Inn,” Roseville coach Greg Ueland said.

The Raiders struggled to defend against the Moorhead offense early as the Spuds took the first set.

According to senior libero Haley Kauth, the slow start was just that. Nerves weren’t an issue.

“Coach said that court is still the same size and after set one, we realized that,” Kauth said.

Senior middle hitter Sara Hain admitted to starting tentatively. “In set two, I decided to block for a point instead of just to help defense,” Hain said. “I thought of blocking as an offensive effort instead of defense.”

Junior outside hitter Alivia Garbe only had three kills in set one but turned around to add 21 more before the match ended.

Junior hitter Alivia Garbe led the Raiders with a double-double of 24 kills and 16 digs.

Moorhead senior outside hitter Kenna Taylor was unstoppable in the first set with six kills for the Spuds. Taylor finished the match with 24 kills.

In the fourth set, Moorhead senior middle Brianna Carney had one of her eight kills to tie the set at 14-14. But Garbe tied the set at 20-20. A setter dump from Bre Maloney sealed it for Roseville.