The Panthers beat the Blaze in straight sets on Thursday. 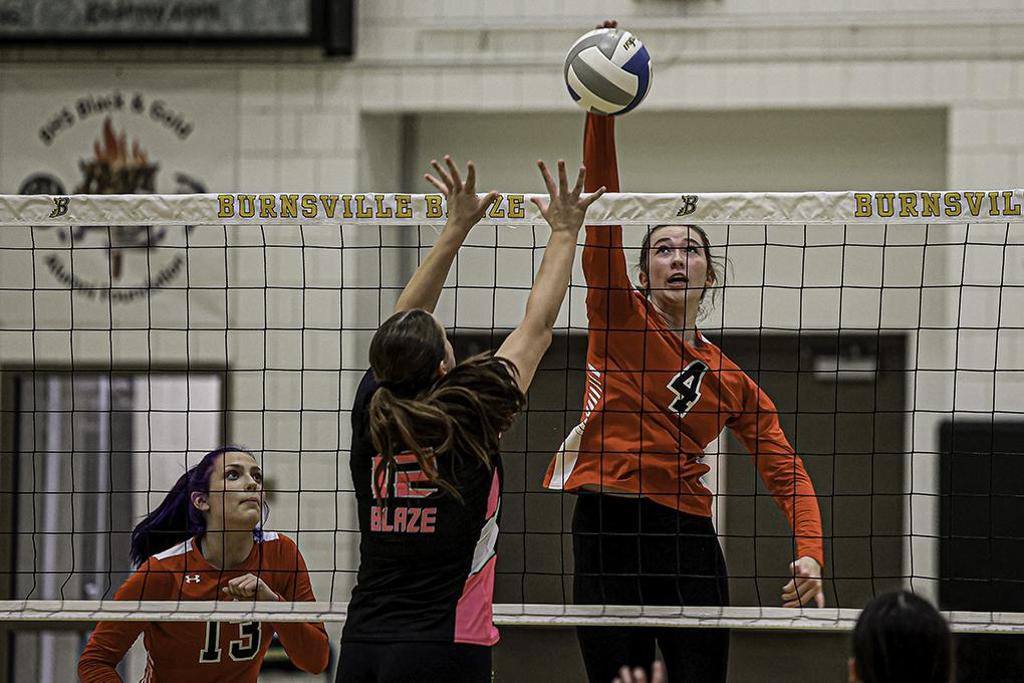 The signs are right there in the Burnsville gym.

The words "Build the Foundation" and "Blaze New Trails" adorn the north wall, and a team flag carted courtside by enthusiastic students during pregame introductions Thursday against Lakeville North included the phrase "In Josh We Trust," a nod to fourth-year Blaze coach Josh Wastvedt.

There is a growing confidence in the school's volleyball program, which has been climbing out of a decade-long slump and is looking at a very realistic possibility of making the team's first state tournament appearance since 2009. A three-set loss – 25-17, 25-20, 26-24 – to the perennial state power and conference rival Panthers (11-2, 4-0) on Thursday night was, of course, disappointing Wastvedt said, but also full of good omens. 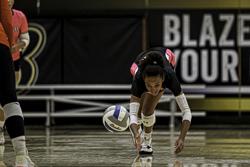 "We've been talking a lot about believing in ourselves and being confident," Wastvedt said. "We're working very hard to change our culture."

But Wastvedt and a talented crew of players such as seniors Kiylah Franke and Julia Valois and super sophomore Mesaiya Bettis have the Blaze on an upward swing. Since he became head coach in 2019, Burnsville is 39-44 and last fall had its first winning season since 2013. The Blaze won its first six games this season but have struggled with injuries and stronger competition in the middle portion of the season.

Playing in the South Suburban Conference, one of the toughest conferences in the state, has not been conducive to making a big leap. In fact, winning games within the conference remains the biggest hurdle for the Blaze to overcome. Burnsville (10-8, 0-3) has beaten just four conference opponents since the start of the 2013 season and is 1-3 this year with a victory over Eastview earlier this month at the Marshall tournament.

"We work so hard and we're so close," said sophomore Kate Dam, whose hand-tattooed mantra on her forearm ("UR Worthy") could just as easily be applied to her team. "We're just a step away."

That step did not happen on Thursday against a Lakeville North team that has won 11 games, remains unbeaten in league play and is ranked third in Class 4A by the Minnesota Coaches Association. But the Panthers' victory was not easy. Burnsville, despite playing with its two stars limited with injuries and a third starter sidelined by illness, battled to remain within striking distance the entire game. When Lakeville North pulled away from an 11-10 lead in the third set and Bettis left the game after aggravating an Achilles tendon injury, the Blaze fought back from a five-point deficit to tie the game at 23-23 and force the Panthers to win 26 points to take the set and the game.

"We've always been overlooked and been the underdogs," Dam said. "But with the hitters we have, with the serving and defense we have, I believe we can win. We just need to have the drive."

Even if the Blaze struggle the rest of the way through the conference season, they remain a strong contender to win their first state tournament berth since 2009. Burnsville is assigned to Section 6, won last season by Bloomington Jefferson but experiencing a downturn this season. Burnsville's prime competition in the section appears to be Minneapolis Southwest from the Minneapolis City Conference and St. Louis Park of the Lake Conference. Minneapolis Southwest and Burnsville are the only section teams with winning records.

But Wastvedt has bigger goals in mind. He doesn't want to be the team that backed into the state tournament. "We want to host the section tournament with no questions asked," Wastvedt said.

The coach acknowledged his team will have to beat a few of its remaining conference opponents to earn that, but he is confident that with a little time off for his stars to heal the Blaze can start to crack away at the strong bonds of the South Suburban Conference opposition.

"We're excited to compete with our full lineup," he said. 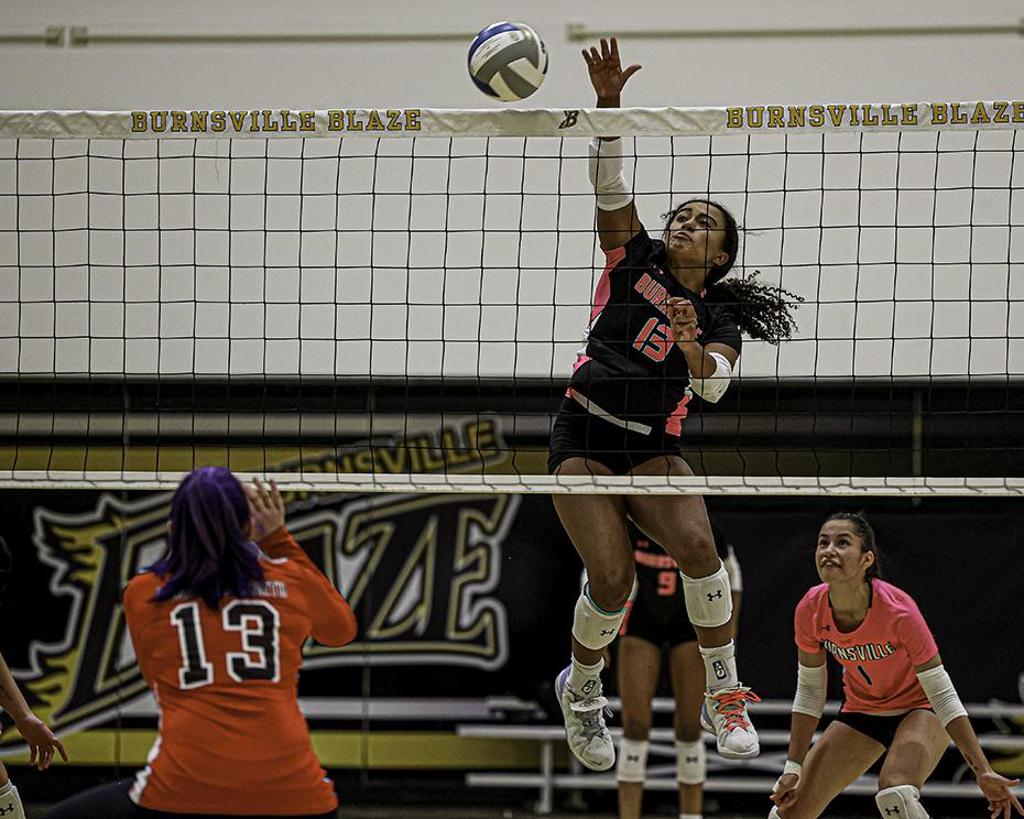 Senior Kiylah Franke (13) led Burnsville with 11 kills despite playing a back injury that limited her playing time. Photo by Mark Hvidsten, SportsEngine

Lakeville North setter Ava Blascziek has plenty of options to turn to when her team needs a point or two. And the senior found the right players at the right times as Lakeville North held off Burnsville 25-17, 25-20, 26-24 in a South Suburban Conference match on Thursday night.

Blascziek found 6-foot-1 freshman Rayna Christianson in the middle or Emily Ramsay and Annika Swenson on the edges when Burnsville tightened up the game on the Panthers (11-2, 4-0), ranked third in the Sept. 19 Class 4A poll by the Minnesota Coaches Association. It was just enough to hold off a resurgent Burnsville team that has not beaten Lakeville North since Sept. 20, 2012.

The Blaze (10-8, 0-3) were playing both hurt and short-handed. Senior Kihlah Franke, who led Burnsville with 11 kills on Tuesday, has been playing with a sore back that keeps her out of the full rotation and sophomore Mesaiya Bettis (nine kills) has been playing on a sore left Achilles tendon that put her on the bench for the last part of the game. And Julia Perrine, who leads Burnsville in blocks, missed the game with an illness. 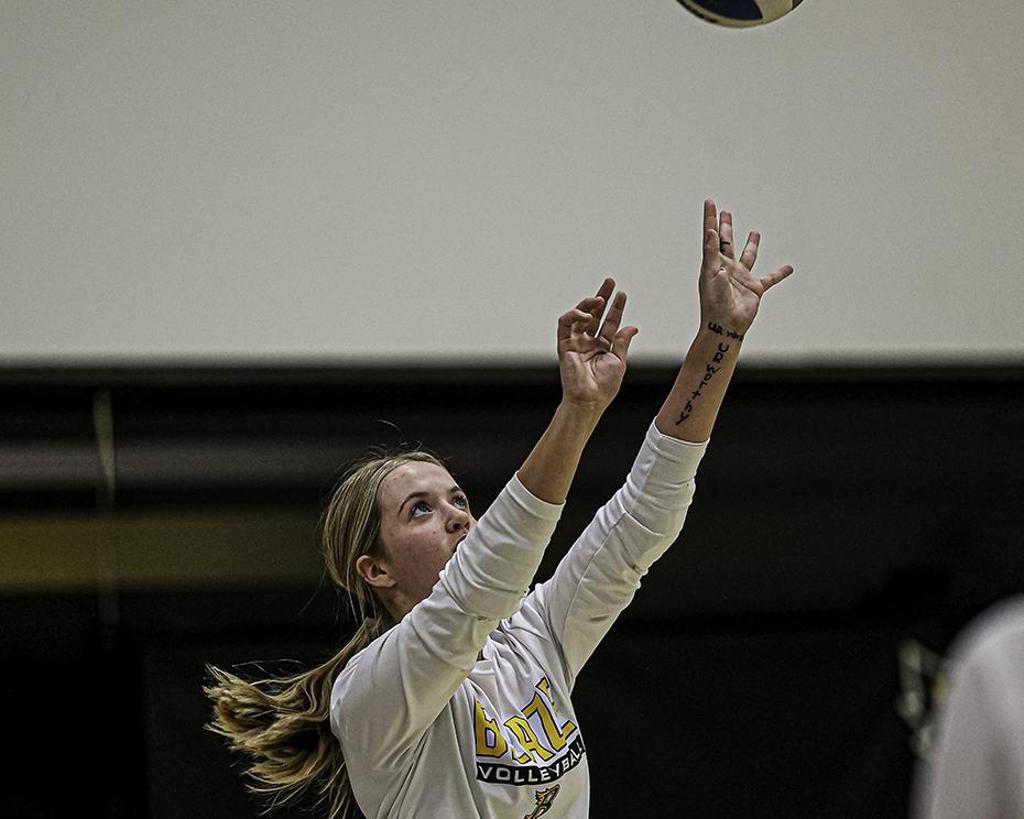 Burnsville sophomore wore her personal mantra – "UR Worthy" – on her forearm. It is a theme that also applies to the Blaze, who are working to change their team culture after several losing seasons. Photo by Mark Hvidsten, SportsEngine