Chaska gets key victory over Chanhassen

The Hawks beat the Storm in straight sets on Thursday. 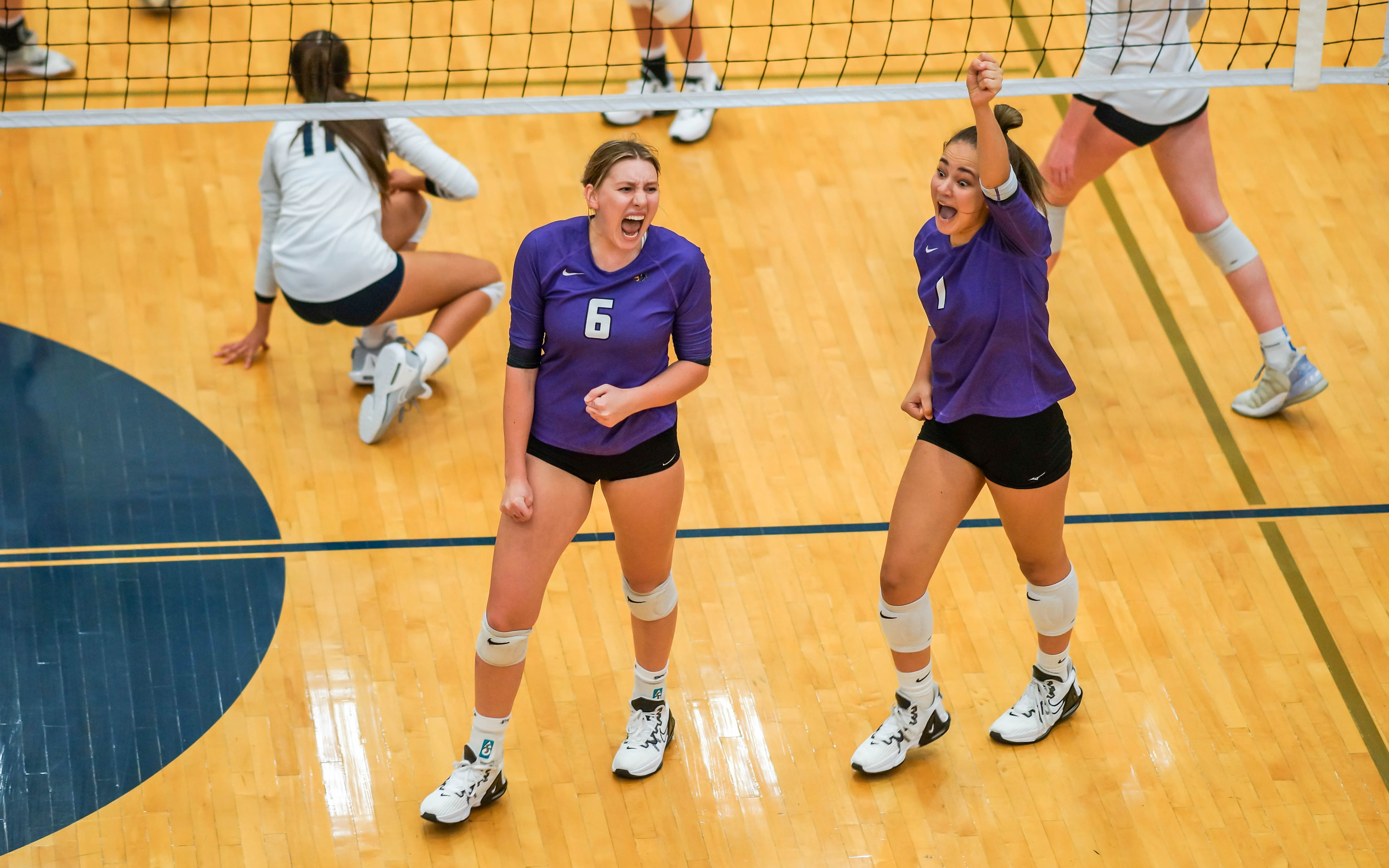 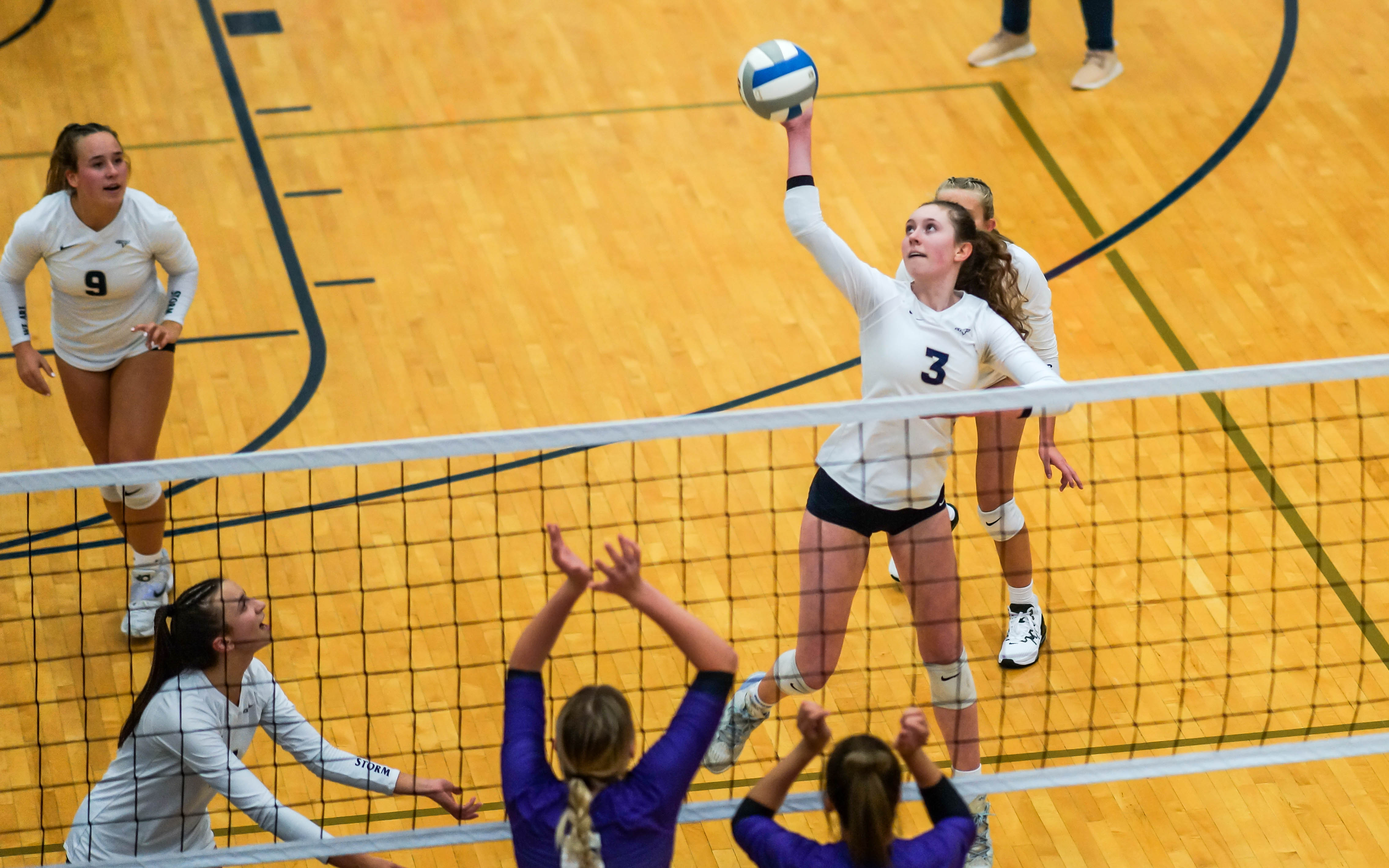 Chaska coach Susan Murphy wants her team to play fast when it comes to moving the ball on offense. Early in Thursday’s match against rival Chanhassen, the offense was not moving at a speed Murphy would like to see.

Eventually, the Hawks figured how to get back to their quick-paced offense. Soon after, Chaska gained a lead, a win in the first set and an eventual road sweep (25-14, 25-14, 25-21) of Chanhassen.

Though Chaska (8-4, 2-0) had the advantage on paper against the Storm (3-6, 1-1) heading into the match, the two teams are geographical rivals and played in front of a larger-than-normal crowd inside the Chanhassen High School gym.

“We all just talk before the game and prepare for the bigger crowd,” said Chaska senior middle blocker Avery Rosenberg. “It’s not necessarily pressure. It’s just a different environment.” 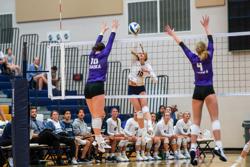 Chanhassen found some success early on against the Hawks, ranked No. 7 in the Sept. 11 Class 4A coaches’ poll. The two teams traded points early.

Soon after, the Chaska offense found its groove thanks in big part to senior setter Katrina Thompson. She got the ball moving quickly with 28 assists and got it out to a myriad of hitters who were able to get kills.

“We were passing really well,” Thompson said. “I was able to run a really nice offense tonight. We’re a pretty quick offensive team and that separates us from other teams.”

Besides the quick scoring offense, the Hawks made life difficult for the Storm with a tough block. They made it nearly impossible for Chanhassen hitters to get a strong hit over the net.

“We’ve practiced a lot of getting up over top of the tape,” Thompson said. “We executed that tonight. We were able to get there. We knew what they were running and get over quickly.”

Those blocks not only helped build the Chaska lead but got the Hawks bench and fans excited.

“I know a good block kill gets us hyped up for the next point,” Rosenberg said. “They’re great to get.”

Chaska ended up winning that set 25-14. Things got even better for the Hawks in the second set as they jumped out to a 9-0 lead. Eighth grade libero/defensive specialist Clara Christ held down serving duties in that stretch. She finished the second set with four aces.

“We love Clara so much,” Rosenberg said. “Knowing that we trust them and give them that extra encouragement. We’re excited for them to score on every ball they touch.”

Though Christ is young, she had a familiar face on the floor. Her older sister, senior outside hitter Ella Christ, was one of the top offensive performers for Chaska, finishing with 13 kills in the match.

“They work together so great,” Thompson said. “They treat each other like teammates. I’m never worried about any sibling problems out there. They leave it off the court.”

While Chaska won the first two sets by 11 points each, Chanhassen did not go down so quietly in the third set. The Storm spent most of the set going toe-to-toe with Chaska before the Hawks got 8 of the final 12 points of the third set.

“I think we were getting a little chaotic,” Rosenberg said. “We were focused on minimizing our errors that let them catch up to us.”

With another win in their talons, the Hawks will keep looking to their fast offense to produce wins going forward.

“I love having so many options,” Thompson said. “Everyone is so capable I’m always trying to figure out where to go. It’s a fun thing for all of us.” 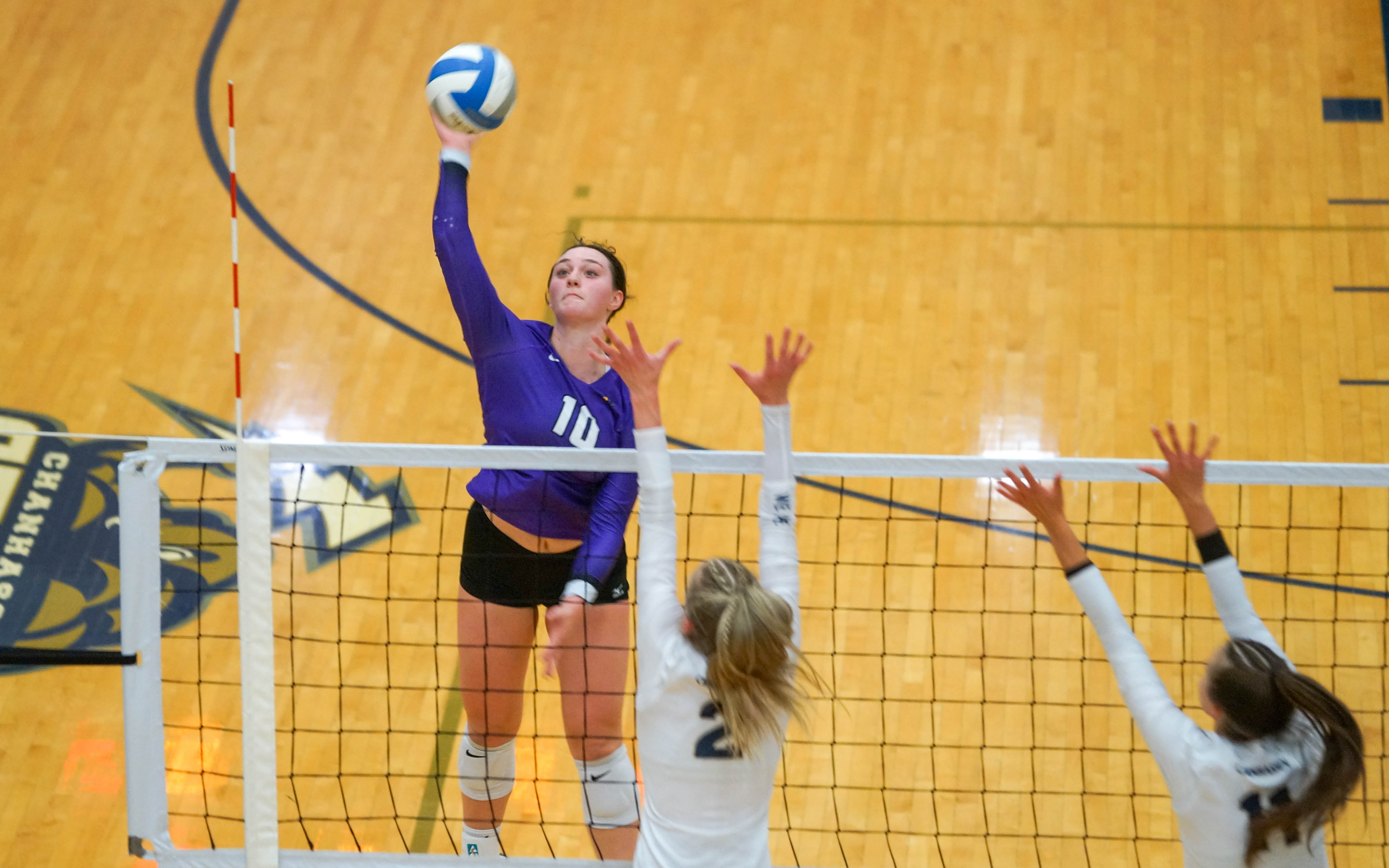 Hawk outside hitter Ella Christ (10) with a spike Sept. 15 against Chanhassen. Photo by Korey McDermott, SportsEngine

While the first part of the first set was even between the two Metro West Conference foes, the Hawks, ranked No. 7 in the Sept. 11 Class 4A coaches’ poll, pulled away thanks in part to a 15-5 run to close out the opening set.

The two big keys throughout the match for Chaska (8-4, 2-0) were the team’s hitting and blocking efforts at the net. Senior Ella Christ helped lead the charge with 13 kills and two blocks. Fellow senior Avery Rosenberg matched her teammate with 13 kills but finished with five blocks.

The catalyst for that was setter Katrina Thompson. She finished the match with 28 assists and three blocks.

In the second set, the Hawks continued their dominance as they got off to a 9-0 lead. Chaska went on to win the set 25-14 with eighth grader Clara Christ dropping in four aces in the set.

Chanhassen (3-6, 1-1) attempted to push its rival to a fourth set as the Storm kept pace with the Hawks in the third set. Lauren Barker led the way in the set with three kills with Chanhassen before Chaska eventually won the set and clinched a sweep.