The Tigers finished off a dominant state tournament by not dropping a set, beating Kasson-Mantorville in the final. 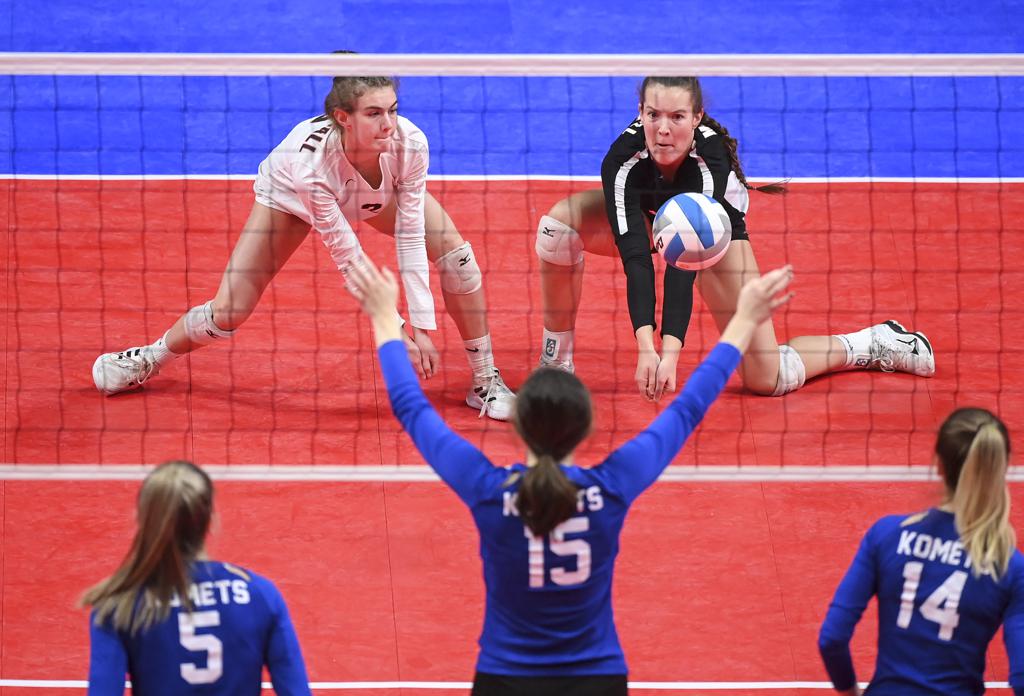 After the first set of the Class 3A volleyball championship match, Marshall assistant coach Alex Boddy leaned over to head coach Dan Westby and said, “The best thing about that set is it’s over and we won.”

“That really was true,” Westby said. “It took us awhile to get going.”

But once Marshall gets going, it’s tough to stop. The top-seeded Tigers finished off a dominant state tournament performance with a 27-25, 25-22, 25-16 victory over No. 2 seed Kasson-Mantorville on Saturday at Xcel Energy Center.

Marshall (33-2) didn’t drop a set at the state tournament. However, that streak was threatened when Marshall trailed for much of the first set against the KoMets, falling behind 21-15 and then having to fend off three set points. Marshall senior Tessa Gannott had a pair of kills in that stretch before adding a block and helping her team take the 1-0 match lead.

“During that first set, I know a lot of us were getting nervous, but Tessa came out and pushed really hard,” said Marshall senior Megan Wegner. “She really gave us that first set.”

Gannott ended up with 15 kills in the match, while junior Leah Jones and senior Taylor Ariasola each had eight.

In the third set, the KoMets tied the match 16-16. Westby called a timeout, and then watched his team promptly score the next nine points to secure the title.

Westby said his team has been resilient all year.
“I always like to make the comment they have the secret sauce,” Westby said. “If I ever figure out what that is, we’ll use it over and over again.

“But this group has the secret sauce, and because of that, there was never a doubt in their minds that they were going to get this done.”

The KoMets added another nine service aces — seven from Aryss McAdams — and the team finished with 31 total aces in the tournament. Annika Larson had nine kills, and Ellie Ask added eight kills.

KoMets coach Adam VanOort was happy with how poised his team played, especially to start the match.

“It looked like we’d been there a bunch of times,” VanOort said. “We were just playing really good volleyball there. Late in the (first) set, obviously we tightened up a little bit and kind of gave that one away.”

It was the first state championship match for Kasson-Mantorville since 2002. The KoMets made the state tournament six times since then but never made it past the semifinals.

Reflecting on his team’s 2021 season, VanOort said the KoMets “weren’t supposed to be any good at all,” but his team worked hard at learning and making changes to finish as the Class 3A runner-up.

“They exceeded my expectations in every way,” VanOort said. “We didn’t have a perfect season, but we had a great season.”

Marshall was playing in its 30th state tournament. It’s now won seven state titles and played in 14 state championship matches. The Tigers last played in a title match in 2018, finishing second to North Branch in five sets. Westby said the coaching staff talked about that loss during Saturday’s awards ceremony.

“We were up 17-16 in the fifth set, and committed an error and opened up the door for North Branch,” Westby said. “I’m going to take that one to my grave, I know that.”

Marshall’s only two losses this season came against Class 1A runner-up Minneota and Class 4A program Eagan, both in invitational play.