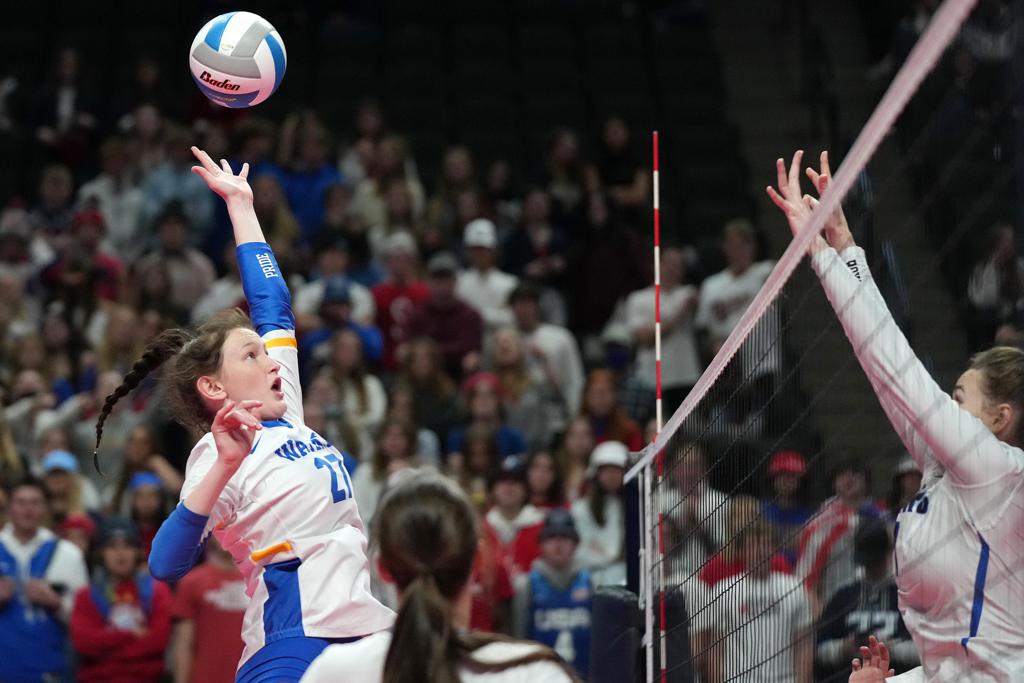 Wayzata middle hitter Mel Goldstein (27) went up for a block against Rogers in the Class 4A semifinals on Thursday. (Anthony Souffle, Star Tribune)

For one set, the Class 4A semifinal match between the undefeated and No. 1-ranked Trojans and the Royals looked remarkably even.

Wayzata had lost only six sets all year, but one of them was to Rogers during a late-season tournament. The Royals had played one of their best matches of the year in beating Lakeville North in the quarterfinals.

The teams went back and forth in that first set. Rogers even held a late lead, 23-22. But as the state’s top team all season, Wayzata has made a habit of taking its opponents best shot and not flinching.

“We did nice job in the first set, put a little pressure on them,” Rogers coach Bo Schmidt said. “The second set, we tried to do a little too much. Ended up with a lot of errors on our side of the net.”

Wayzata (33-0) has spent its entire season in opponent’s cross hairs, knowing that every one wants to take down the big dog.

“It’s a big momentum shifter,” said Ella Voegele, the Trojans’ talented libero whose repeated ability to dig Rogers’ attacks and turn them into playable passes was central to Wayzata’s victory. “After we took that first set, it kind of felt like we crushed their spirit a bit.”

“To take the first set was just huge for us because the first set is kind of a big deal in volleyball,” she said. “It can take momentum to either team. We’re used to it. We like when the other team is trying their hardest.”

Added Voegele: “We thrive under the pressure because we’re so used to it.”

While it was a disappointing end to a terrific season for first-time entrant Rogers (29-5), the players saw it as a first step on a journey to turn the program into a perennial contender.

“It was amazing, putting the school on the [volleyball] map,” Royals senior outside hitter Brynn Reines said. “It’s not something this school is used to.”

The only uncertainty surrounding the East Ridge volleyball team after the Raptors beat Eden Prairie 25-13, 25-20, 20-25, 25-17 Thursday in the Class 4A tournament semifinals at Xcel Energy Center was when the Raptors’ season went from promising to exceptional, on the verge of a state title.

They didn’t shy away from tough opponents early, taking lumps while testing their mettle. They even took a loss at Wayzata, their opponent in Friday’s night’s final.

“Preseason, we played all the ranked teams and now we’re playing them again,” said 6-5 senior outside hitter Britt Carlson, who knocked down 27 kills in the semifinals. “It shows the growth we’ve had all season. The wins we didn’t have then, we’re getting them now. It shows we deserve to be here.”

Eden Prairie (20-7) had built a reputation as a gritty, determined group unafraid to fall behind and able to rally.

“Being down 0-2, it’s not easy,” Eden Prairie coach Chad Becker said. “We did it once [against Forest Lake in the quarterfinals], but East Ridge made us pay for it. We just had too many unforced errors.”

East Ridge, which took down Eagan — which had played in seven consecutive state championship games from 2013 through 2019 — in the Section 3 championship to get to the state tournament, is counting on a repeat of history Saturday.

“This is the exact game everyone imagines when they talk about a state championship,” Carlson said. “It’s our turn to play our best game and hopefully take a ‘W.’ ”