A player with hops: Julia Hanson soars as Volleyball Metro Player of the Year

The Prior Lake senior and future Gopher is a dominant leaper. Her hitting ability makes her next-level. 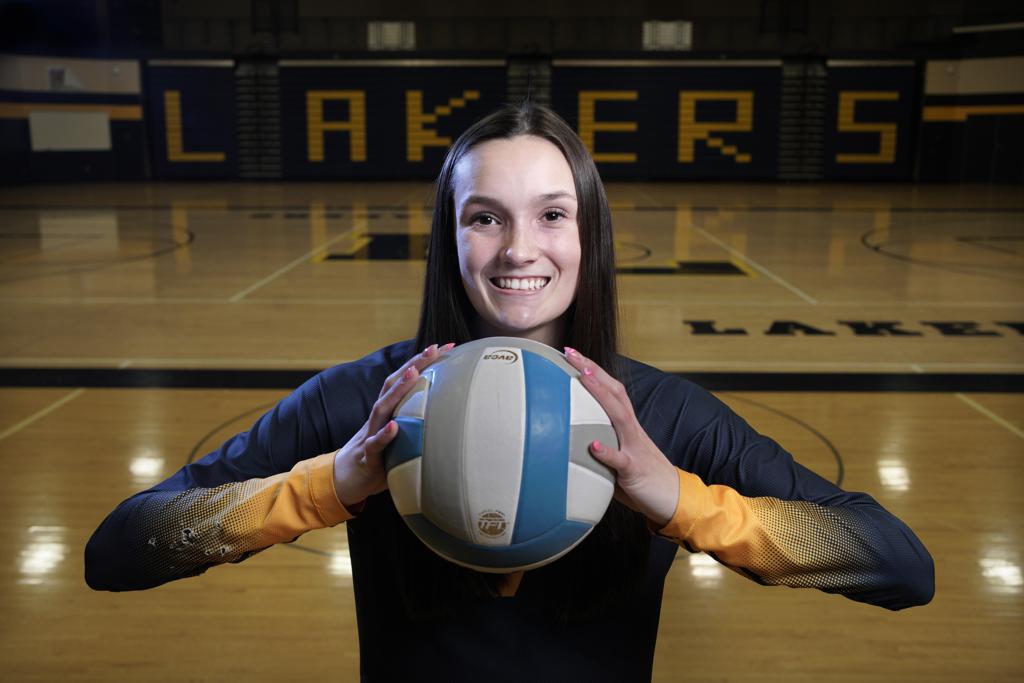 "When I jump high, I can just kind of float in the air.” Prior Lake's Julia Hanson is the 2021 Metro Volleyball Player of the Year. (Brian Peterson, Star Tribune)

They call her “Hops” and it’s easy to understand why.

When talk turns to the fabulous skill set of Prior Lake senior outside hitter Julia Hanson, it is typically done in astonished tones referencing her amazing ability to leap above 7 1/2-foot nets.

The youngest child in an athletic family – her brother is a pitcher in the Cincinnati Reds minor league system, and her dad played two sports in college – Hanson didn’t set out to be a volleyball player.

Gymnastics was her pursuit when she was young. While she gravitated away from the sport as she grew longer and taller, there were residuals:

Strength and, most importantly, explosiveness.

Leaping ability does not a great volleyball player make, but it provides a wonderful foundation to build on.

“I can certainly jump high enough to get up to a [basketball] hoop, but I haven’t been able to dunk, at least not at school,” Hanson said. “But it’s happened with my friends.”

She first experienced organized volleyball in sixth grade (she says she never cared much for basketball), and it quickly became a passion.

Success, however, took a little longer. At first, she was volleyball’s version of “Nuke” LaLoosh, the fireballing pitcher from the film “Bull Durham” whose pitches were just as likely to sail over the backstop as they were to hit the catcher’s mitt.

“I would jump so high, but I didn’t know how to hit,” Hanson recalled. “Every time I hit the ball, I didn’t know where it was going. It would soar out of bounds or hit the wall. It still gets brought up to this day.”

“She’s always had a gift for jumping and a fast swing,” said her mother, Lisa. “It just took her a few years to figure it all out.”

It was that feeling of hitting, combined with her natural gifts, that took root. It was addictive. This is what she was born to do.

“I loved that it was such a team game,” Hanson said. “And when I jump high, I can just kind of float in the air. It gives me the ability to see around the block.”

She’s honed her attacking skills through her relentless drive to improve. Hanson blistered a state-leading 537 kills for Prior Lake this season and has 1,490 in her four-year high school career.

But Hanson’s game is not simply defined by her impressive physical skills. This year, with graduation-caused holes to fill, Hanson shouldered the role of team leader.

The Lakers went through some early growing pains, losing six of their first eight matches, but showed marked improvement as the season progressed, a fact Hanson points to with satisfaction.

“It was a lot of fun, helping the younger players,” she said.

Her remarkable leaping ability always gets noticed, as does her dedication to improvement. Gophers coach Hugh McCutcheon saw her potential early and offered her a scholarship before her sophomore year.

“Ever since I started playing, I’ve wanted to play for Hugh and represent my home state,” Hanson said.

“She’d been talking to quite a few colleges when the U contacted her for a visit and then made the offer,” Lisa said. “We were amazed. Her hometown school. We were so excited.”

Hanson understands there’s a lot of work ahead of her. She’s not a finished product, admitting that “my blocking and serving are two things I need to get better at.”

That’s not expected to be a concern for Hanson, who has made her love for volleyball her priority. “I want to be the best I can be, on and off the court.”