Despite falling in the fourth set to the Skippers, the Trojans fought back in the fifth set to remain undefeated. 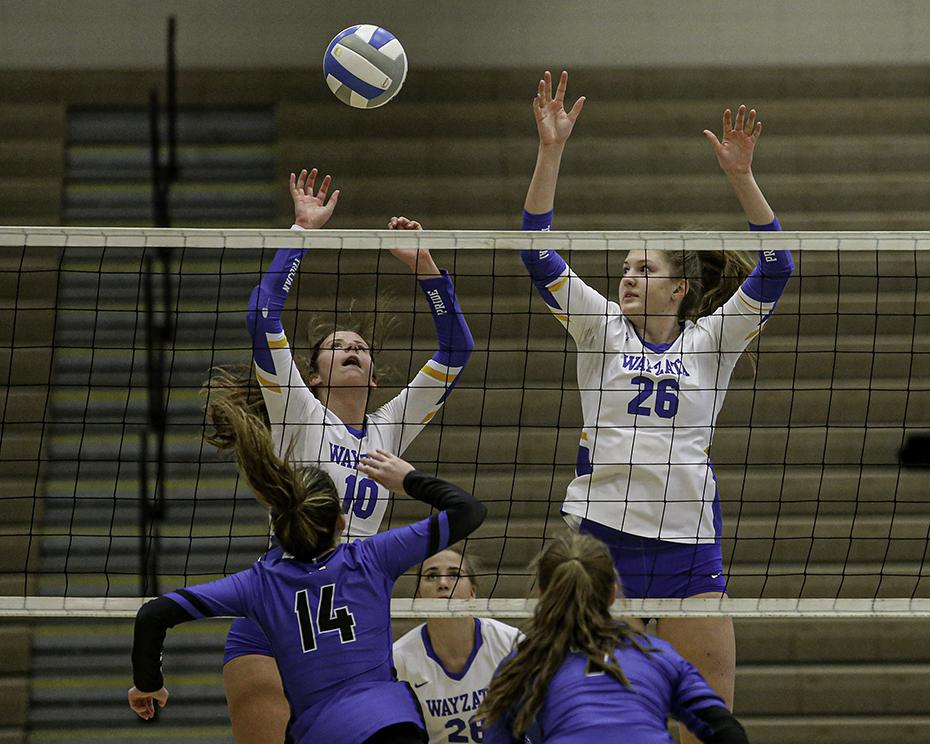 Wayzata's Stella Swenson (10) and Emma Goerger (26) come down after blocking a shot by Minnetonka's Morgan Rooney in the Trojans' five-set victory. Photo by Mark Hvidsten, SportsEngine 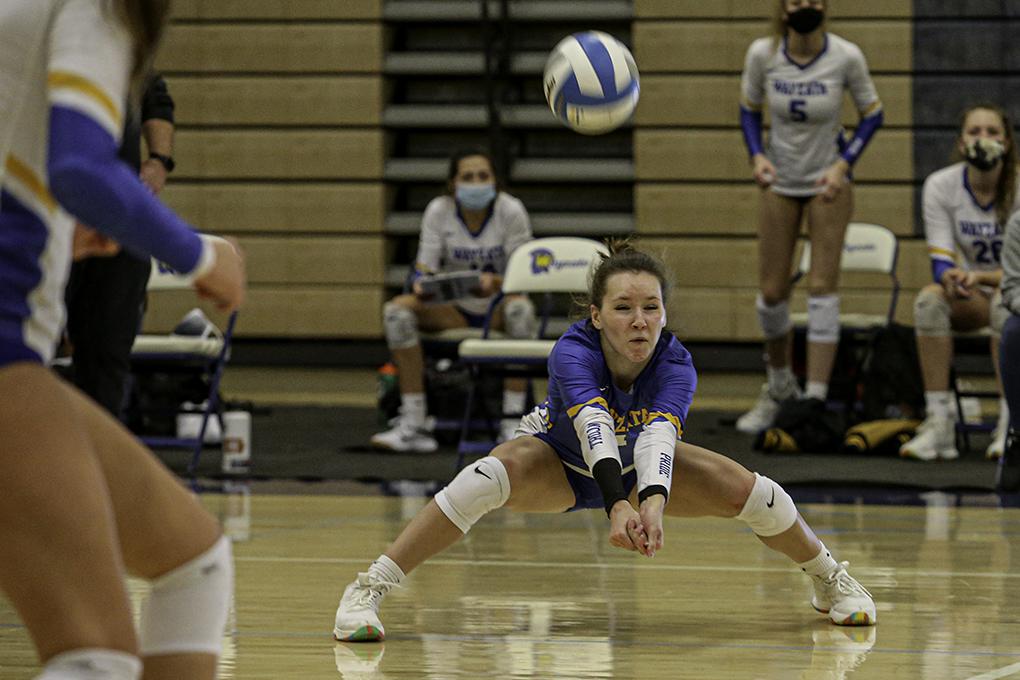 Wayzata's Ella Voegele stretched to return a serve during the Trojans' 3-2 victory over Minnetonka. Photo by Mark Hvidsten, SportsEngine

When a match gets decided in a winner-take-all fifth set, it’s natural to look back and think about what moments put one team over the top.

“I think that the way we came back from the fourth set, we didn’t win it, but I thought we came back with momentum which we carried into the fifth set,” Wayzata freshman Stella Swenson said.

The Trojans, ranked No. 1 in the Class 3A coaches’ poll, trailed the No. 7-3A Skippers 17-9 at one point in that fourth set, but Wayzata battled back to apply pressure to the Skippers and came away with a 15-9 victory in the decisive set to stay undefeated this season.

In what Wayzata coach Scott Jackson described as his team’s “toughest test of the season thus far,” he was adamant that aggressiveness is what put his team over the edge tonight. 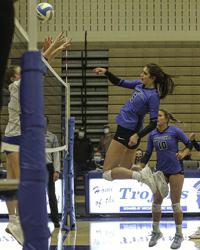 “We were playing a bit tentative [to end the third set] and we carried that into set four,” Jackson said. “We weren’t playing aggressively enough and that’s all we talked about going into set five. Play aggressively; the more aggressive team was likely going to win.”

That aggressiveness was showcased on both sides of the net tonight, but the biggest difference makers for the Trojans were sisters Stella and Olivia Swenson. Stella leads the team in assists, while Olivia leads the team in kills, and that was no different tonight. Stella had a team-high 37 assists and Olivia had a team-high 16 kills, with 12 of them assisted by Stella.

“It’s the best feeling ever,” Stella said of playing with Olivia. “I know I always have my twin sister on the outside and I can always go to set her cause I know she’ll get a kill or keep it in play. She’s a very reliable player and I love setting her.”

While the two freshmen have been the stars for the Trojans, it was a senior that Jackson was quick to praise for her play.

Kaelie Hainlin made her first start of the season because a regular starter was isolating after recent exposure to COVID-19. Hainlin had four blocks Tuesday, including two in the fifth set to keep the momentum for the Trojans.

“I was really proud of Kaelie tonight. As a senior stepping into our biggest match of the year, you know, that’s what this year is all about is stepping into holes with COVID going on,” Jackson said.

Before the playoffs start, these two teams will face off again to end the regular season. Minnetonka coach Karl Katzenberger expects it to be just as competitive as Tuesday’s match.

“Our kids and our coaches and everybody in our building, we expect ourselves to excel, that’s our expectation,” Katzenberger said. “When a team like Wayzata comes, and they play a little better, then you take your hat off and say congratulations, well done. We get them in our gym again, they’re going to get that same effort and hopefully we’re going to play a little better.”

The defending Class 3A state champion Trojans (10-0, 9-0) cruised through the second set and had a 12-3 lead midway through the third set, with the Skippers being completely outplayed. Minnetonka bounced back to narrow the score, however, before Wayzata took the set by three points.

The Skippers came out strong in the fourth set and took a commanding 8-2 lead early. It was a lead they wouldn’t lose, although just like the Skippers did with the third set, the Trojans fought to make it a nervy ending. Minnetonka’s Kali Engeman secured the set with one of her match-high 17 kills, sending the contest to a fifth set.

The Trojans won the fifth set with their size up front, as Emma Goerger and Kaelie Hainlin each had a couple blocks to come away with a set victory. Goerger had a game-high six blocks, while Hainlin added four blocks. 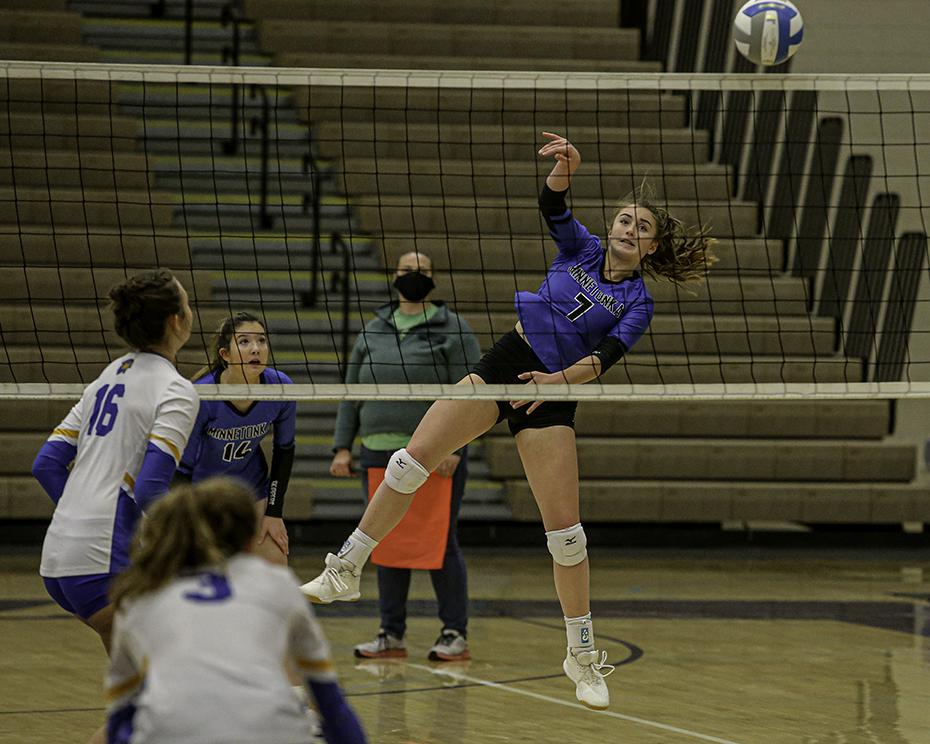