With their victory over the Rebels, the Knights advance to Thursday's Class 3A, Section 5 final. 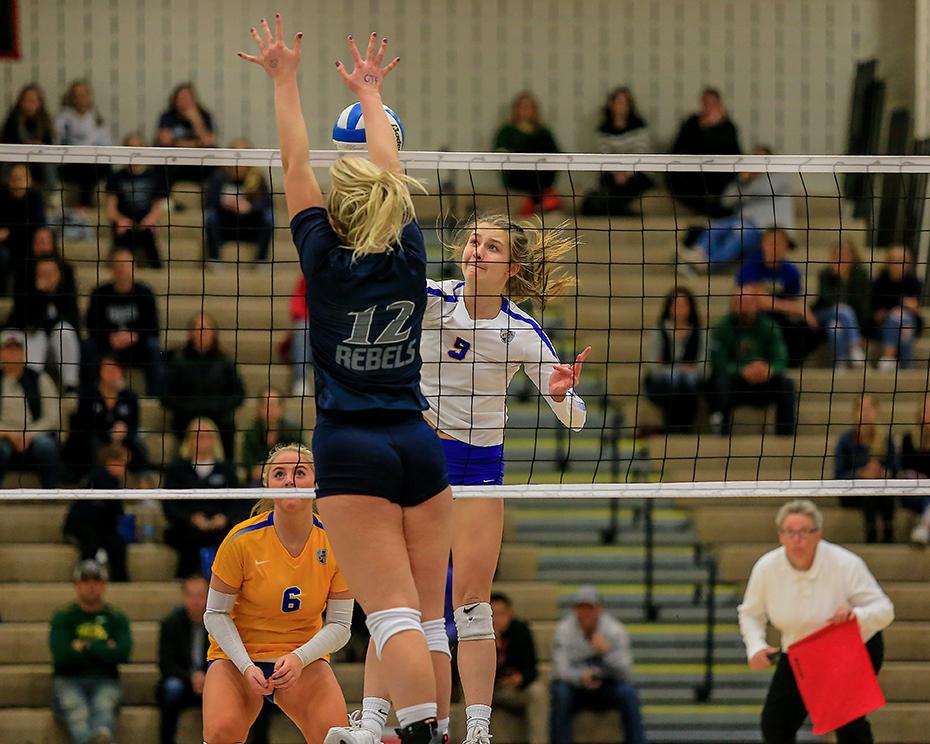 St. Michael-Albertville's Emma VanHeel (9) had this shot blocked by Champlin Park's Hannah Prasky. But VanHeel and the Knights held off the Rebels in five sets. Photo by Mark Hvidsten, SportsEngine

It wasn’t the start coach Tammy Cornillez was looking for, as her St. Michael Albertville squad found themselves in a 20-7 hole to start the opening set Tuesday at Wayzata High School.

The Knights went on to lose the set 25-10. Then St. Michael-Albertville shook off its slow start, jumping to a 14-11 lead in the second set, pushing the Rebels to match point before losing it 26-28.

Despite being down 2-0, St. Michael-Albertville wasn’t defeated and knew it had more.

“The whole time, I don’t think anybody felt like we were going to lose,” said Knights outside hitter Mikala Henderson. “There was never the mindset that we are going to lose by being down two sets.” 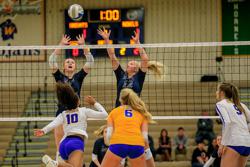 Champlin Park got to match point in the fourth set, leading 26-25, but following a timeout the Knights responded with a streak of three points to clinch the fourth set thanks to the team’s endurance and resilience, according to Cornillez.

“We have been working really hard in practice with our physical endurance, as well as resetting and staying in the moment,” she said.

Once the fifth set started, it seemed nothing would stop the Knights from coming away with the win as 5-foot-8 Henderson, who finished the match with 12 kills, and 6-foot Emma VanHeel helped power their team to Thursday’s section championship match.

“It feels pretty awesome,” Henderson said, adding that this year’s Knights team is special because of how collective they need to play to be successful.

“We’re not one of those teams with six DI players, so we have to play together, and coming together to play with heart and passion is what really sets us apart,” she said.

Those same messages were echoed by Cornillez, who is proud to show the state what type of team this is.

“Champlin Park is a great program, but that is what we are trying to establish right here at STMA, so it’s fun for us,” she said.

Despite its lack of size in comparison to other successful programs, Conrillez said the Knights have made strides in other areas to help make up for it.

“Focusing on our defense, and playing with a quick offense, because we are undersized, and most importantly just smarter,” she said

Cornillez stressed that what sets this team apart is the volleyball IQ and the lack of “robotic” players, allowing St. Michael-Albertville (24-6) to reach new heights.

Champlin Park, last year’s Class 3A state champion, had won the section title the last five years in a row but won’t continue its postseason run after failing to convert on its 2-0 lead.

The Rebels (20-10) had a balanced attack, led by seniors Hannah Prasky and Jordan Stalpes, but they also found help from freshman Marlie Hanson who hit the winning kill in the second set.

With the victory, St. Michael-Albertville advances to play Wayzata in the section championship match on Thursday at Osseo High School where the winner will advance to the state tournament. 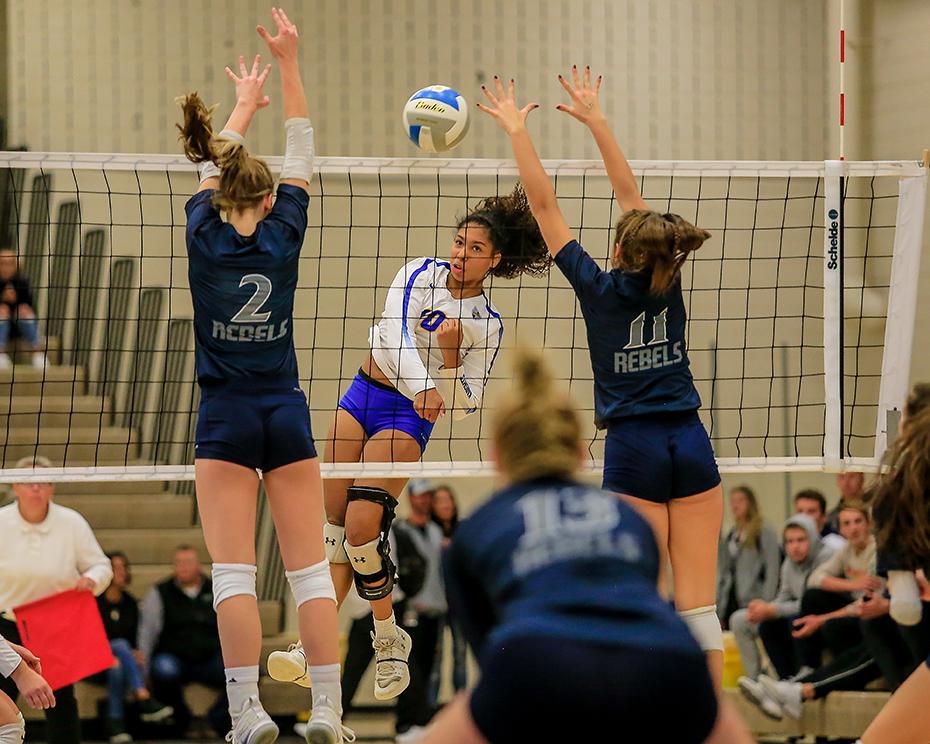 It was a slow start for the Knights, who trailed 20-7 to open play in the first set. After recording just 10 points in the opening set, the second was more competitive with the third-seeded Rebels fighting off two set points before taking a seemingly decisive 2-0 lead.

After grabbing the third set, the teams battled back and fourth in the fourth, then St. Michael-Albertville (24-6) claimed the set win after fending off a Champlin Park (20-10) match point.

St. Michael Albertville seemed to have all the momentum in the final set, and never trailed in the 15-10 win.

Mikala Henderson, who had 12 kills, and Emma VanHeel led the offensive charge for the second-seeded Knights, en route to taking down the defending Class 3A champions.

The Rebels, who were led by seniors Jordan Stalpes and Hannah Prasky, saw their streak of five consecutive state tournament berths come to an end. 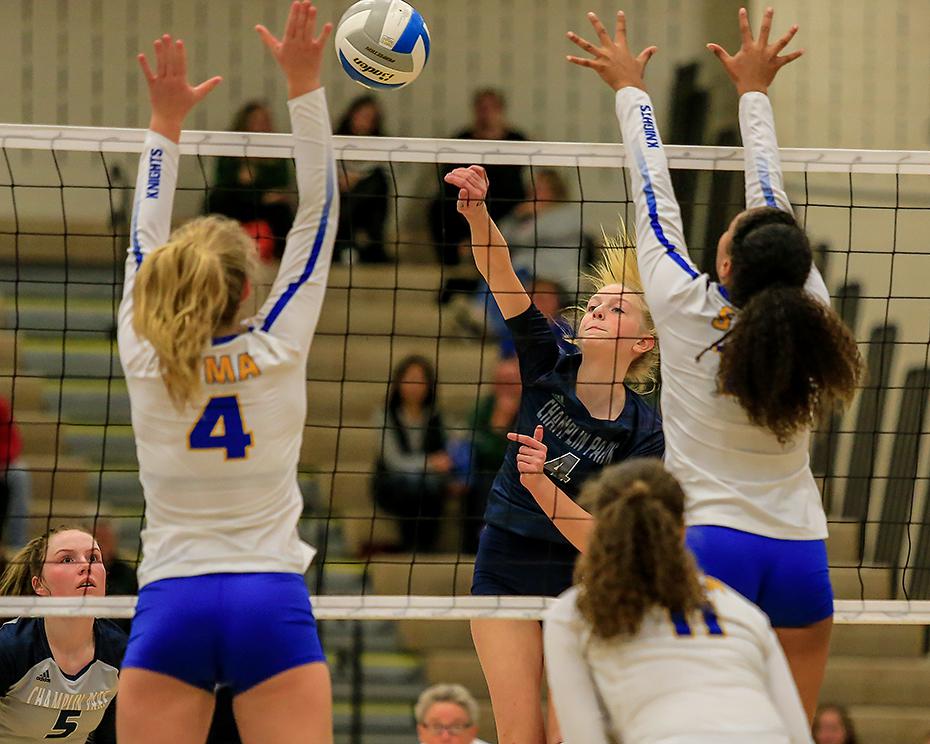