Varsity soccer and volleyball players who don’t compete on off-season club teams are increasingly hard to find in the Twin Cities metro area. 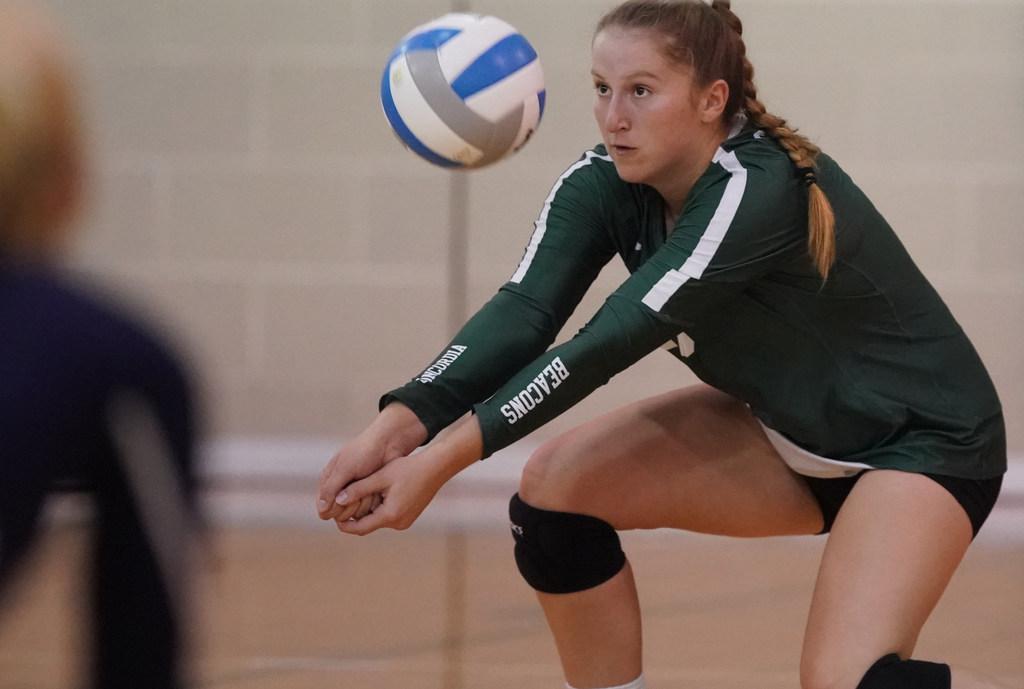 Sydney Pelzer is a starter for Concordia Academy. She also focuses on softball and only picks up a volleyball at open gym in the summer or in the yard with her brother. Photo: RICHARD TSONG-TAATARII ¥ richard.tsong-taatarii@startribune.com

Junior forward Josh Abedu-Bentsi sat at one end of the Totino-Grace bench during a game last week at Champlin Park, each and every teammate to his right a member of an offseason soccer club.

Behind him, one of the game’s ball girls wearing a black MapleBrook Soccer Club shirt playfully dribbled a ball around a boy half her size. About 20 yards away sat a sign advertising Force Soccer Club.

Abedu-Bentsi, who never played club soccer, was the one thing not like the others. But he absolutely belongs. He is one of the first players off the bench for the Eagles, ranked No. 5 in Class 1A.

In a larger context, Abedu-Bentsi is part of a vanishing breed. The prevalence of club sports has made athletes more singularly skilled. In turn, when the high school season comes around, it crowds out those who can’t afford the financial investment or prefer to spend their offseason time elsewhere.

This fall, high school varsity soccer and volleyball rosters throughout the metro area reflect the landscape. For most starters and even many off the bench, the season underway is just another one sandwiched between club team play in their year-round pursuit of skill development.

But there is still a place for players such as Abedu-Bentsi, who also plays basketball and runs track. Great speed, coupled with competitive instincts honed by playing various sports year-round, helps him overcome less-developed skills.

The Roseville girls’ soccer team relies on a pair of players involved in little to no club training in senior goalkeeper Bella DiGiorno and sophomore forward Kate Haug. And Concordia Academy of Roseville, the No. 5-ranked volleyball team in Class 2A, features junior Sydney Pelzer, who keeps the rust off by playing volleyball during open gymnasium times in summer.

Totino-Grace boys’ soccer coach Bill Vance previously served as president of the sport’s coaches association and remains part of the soccer advisory committee for the Minnesota State High School League. He said non-club players making a difference for their high school varsity teams “are still out there.”

“The longer I coach,’’ he added, “the more I want to respect the multi-sport athlete when they produce.”

Forget club soccer. Abedu-Bentsi didn’t play any soccer as a freshman or sophomore. He might have skipped this season, too, had some classmates not urged him to come play.

So, Abedu-Bentsi attended some summer workouts. This was much more advanced than middle school soccer, he thought. He wasn’t sure he fit in anymore.

“I thought, ‘There are a lot of good players and I don’t know if I can keep up,’ ” Abedu-Bentsi said. “The players who played club soccer had more technique. They played at a faster pace and were sharper.”

Vance acknowledged that “touch-wise, you can tell that Josh doesn’t play year-round soccer. But he’s lightning off the bench and he has good instincts.”

Experience taught Vance that players such as Abedu-Bentsi can be utilized. Last season, Totino-Grace went undefeated in Northwest Suburban Conference play thanks to large contributions from starters Eric Krieger, a basketball captain, and Jacob Wacek, a hockey captains.

“You can plug in that athleticism in this environment easier than you can in development academies or high-level, premier clubs,” Vance said. “There are parts of the field where you need athleticism. And then, you give them a little confidence and they get a little bit of their soccer IQ back.”

Haug played on three different club teams during her rise through the soccer ranks. Burnt out, she quit club soccer before her freshman year at Roseville. Playing in a less-demanding high school environment rekindled her love for the sport. But would she be at a competitive disadvantage as she made the jump to varsity as a sophomore?

“I was worried,” said Haug, who plays hockey year-round and also competes on the track and field team. “People learn new skills in club and get better. And I came in a little bit rusty and couldn’t do the moves I did the last season.”

Raiders coach James Cave helped by “kind of designing things around Kate,’’ he said. “She’s not all about foot skills and playing real technical. But what we get from her is a player that knows how to use her body, who knows how to compete, is strong on the ball and is a great teammate. Sometimes, though not as much as maybe we’d like to see, that’s enough to transcend having not played club.”

Pelzer said she notices that she’s “definitely not as consistent as some of the other girls” on Concordia Academy’s volleyball team. But taking part in year-round club softball and also playing basketball helps her close the gap.

“Watching her, it’s like, ‘All right, she’s a little rusty,’ ” Beacons volleyball coach Kim Duis said. “But it’s like riding a bike. Once you get on it, you know how to do it. And you just have to keep fine-tuning it. With the athletic ability of being a three-sport kid, it doesn’t set you back by having not touched a volleyball for eight months.”

DiGiorno spends much of her summers near Ely, Minn., at Camp Widjiwagan rather than stopping shots for a club team. She “paddled the whole Bloodvein River” in Canada in a canoe this year as part of a 30-day outdoors adventure, she said. She has attended the camp for six years, committing to additional soccer training for just part of the time.

But she puts greater value on the life lessons she’s acquired and relationships she’s built away from the field.

“I think most people spend almost too much time with it,” DiGiorno said. “It just seems like a lot to me sometimes. I think I get enough in. I got all-conference honorable mention last year so something is going right.”

“There is experience she doesn’t get by not playing more club soccer but heck, this is high school,” he said. “Go on those trips.”

DiGiorno, like her teammate Haug, is a multi-sport athlete. She plays hockey and golf, though she does little in the way of specific offseason training in either sport.

Cave and other coaches agree there is still a place for such athletes. In fact, some programs count on them.

“We’re an inner-ring suburb with a good core group who play club soccer,” Cave said. “What we also want are the good athletes who are playing other sports. We’re not Wayzata or Stillwater. Nothing against them at all. But we’re not going to get 18 highly skilled, premier players who could play college soccer.”