The Vikings had to rally from behind in all three of their state tournament matches, and each one went the distance. 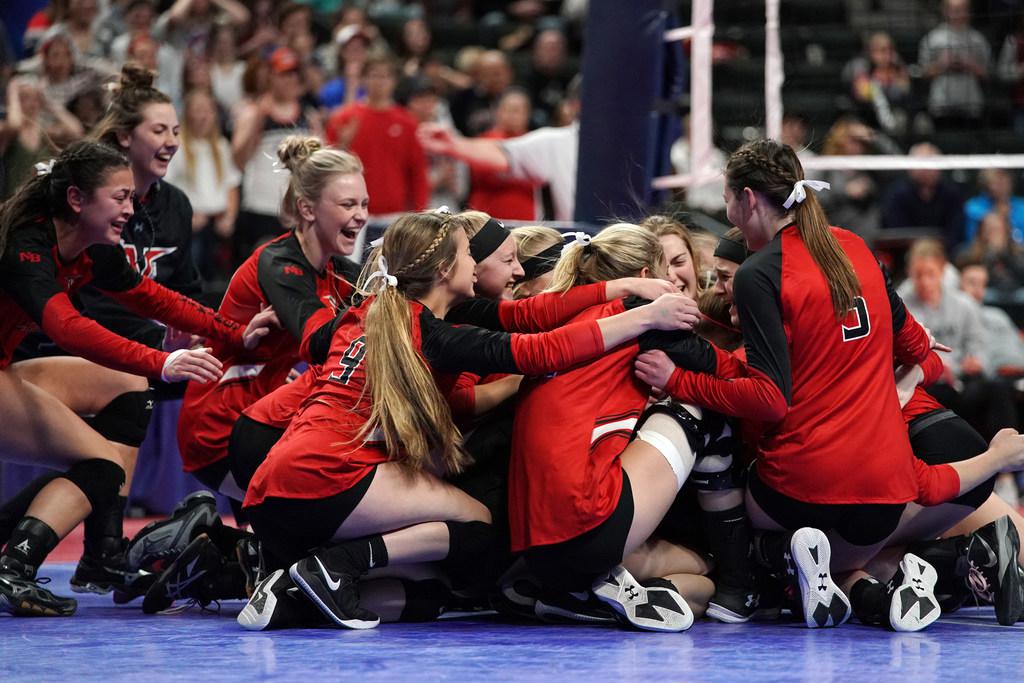 North Branch players were mobbed by their teammates after defeating Marshall in five sets for the Class 2A championship. Photo: ANTHONY SOUFFLE • anthony.souffle@startribune.com

After playing two five-set matches the past two days, North Branch was about out of gas. so the Vikings relied on sophomore Reagan Irons to step up.

Encouragement from teammates Cianna Selbitschka and Kylie Kline pushed Irons’ effort Saturday in the Class 2A championship match against Marshall.

“ ‘Reagan, we need you now to start hitting. Just hit it high and over, you’ll start getting points,’ ” Irons recalled them saying. “And once I noticed I could do that, I’m like, yeah, I got this.”

It was the second comeback victory of the tournament for the Vikings, who trailed 2-0 in the quarterfinal.

“Then taking out the No. 1 seed [Kasson-Mantorville] and then beating a powerhouse Marshall squad that’s been here, done that,” North Branch coach Mike Selbitschka said. “Almost a storybook story for us here.”

After North Branch dropped the first set, Marshall kept up the pressure by winning the next six points. But Irons had five of her 12 kills in the second set to help the Vikings even the match. The Vikings also had four of their 10 total service aces in the second set.

“I thought they really ramped up their serving after set one,” Marshall coach Dan Westby said. “They weathered the storm.”

The Tigers went on a 15-3 run to take the third set before North Branch once again evened things up. While the Tigers prepared for North Branch’s powerful junior Selbitschka, who finished with 25 kills, Westby noted how Irons came alive in the match, which was something they didn’t anticipate.

The back-and-forth fifth set ended with a kill from Lydia and a double-contact ball-handling error on Marshall on match point.

The Vikings once again ousted the Tigers at state, after defeating them 3-0 in the 2017 semifinals.

The No. 3-seeded Tigers (29-6) took second in their record-setting 28th state tournament appearance. Paige Andries had a team-high 13 kills, followed by Erica Jones with 11 and Bria Morris with 10.

No heartbreak loss to a powerhouse team this year. North Branch is now a state volleyball champion, winning another match in five sets.

The Vikings once again rallied, trailing two sets to one. They also had a comeback victory in the quarterfinal, winning after losing the first two sets. They finish the season with a 4-1 record in five-set matches, 3-0 in the state tournament.

It marked a rematch of last year’s state semifinal between the two schools, with the Vikings winning 3-0 last time. The Tigers ended up with fourth place last year while North Branch finished as a runner-up to undefeated Maple Lake.

The No. 3-seeded Tigers (29-6) took second in their record-setting 28th state tournament appearance. They have six state titles and most recently placed second in 2014 with a five-set loss to Stewartville.