Jasmine Mulvihill led the Cougars, ranked No. 3 in Class 3A, with 19 kills past the second-ranked Panthers. 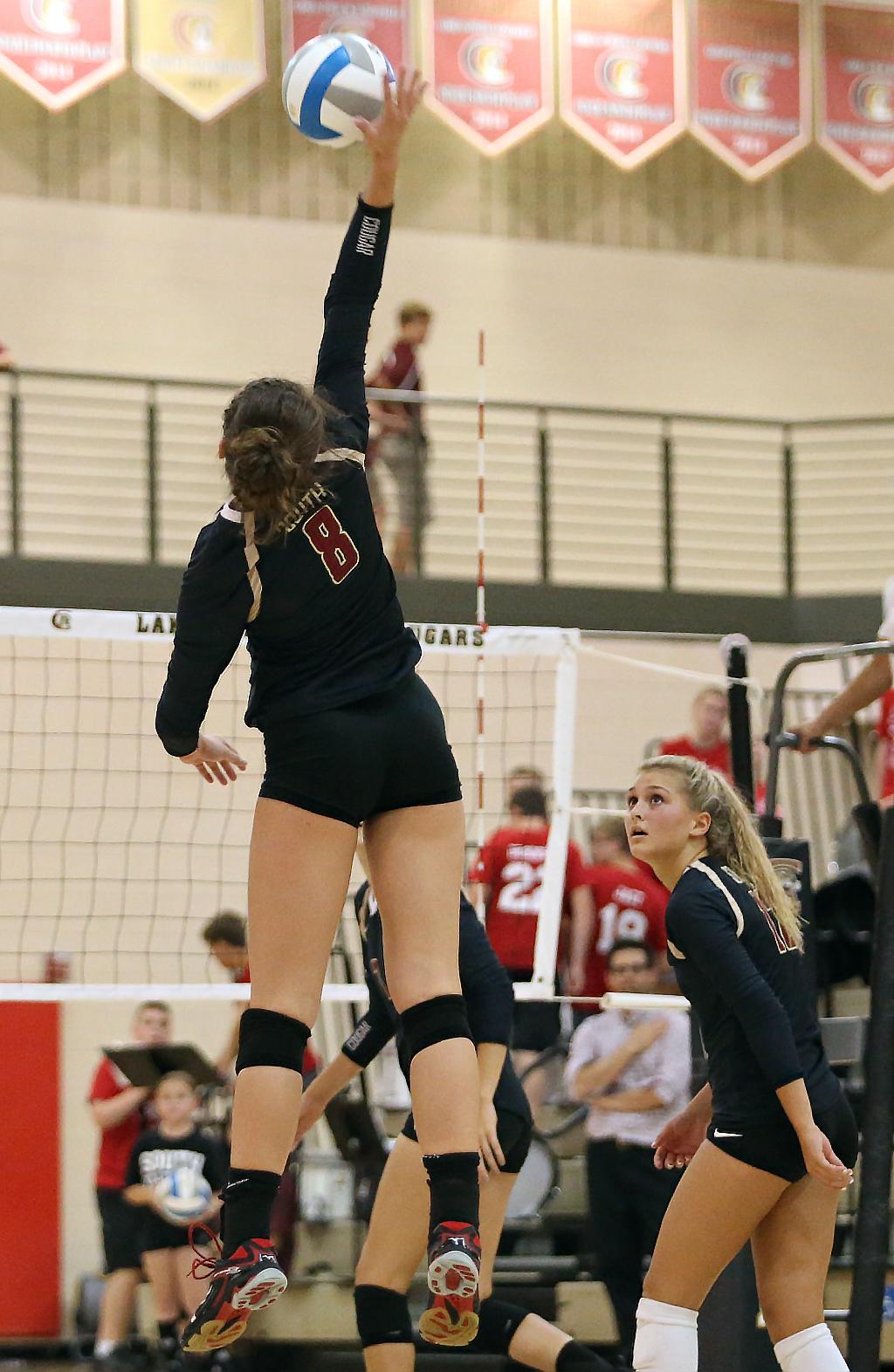 Jasmine Mulvihill (8) goes up for the kill with teammate Jasmine Weidemann by her side. Mulvihill led Lakeville South with 19 kills in its win over rival Lakeville North on Tuesday night. Photo by Cheryl Myers, SportsEngine

The setup was perfect. All it took was some grit to get the job done.

Plenty was at stake when Lakeville South, ranked No. 3 in the Class 3A coaches’ poll, hosted No. 2-3A Lakeville North. It was a rivalry match, with South Suburban Conference and section implications — not to mention pride, with a large, rowdy crowd on hand Tuesday at Lakeville South High School. The Cougars dropped the first set, and a chance to close it out in the fourth, but prevailed in the final set to win 3-2.

“We just stuck together as a team, which was really nice,” Lakeville South senior captain Jasmine Mulvihill said. “We just united really well, which makes us really close.”

Cougars coach Stephen Willingham said one of the team’s four self-decided values is grit. It was on display all match, especially when the Cougars finished the final set on a 7-0 run to go from being down 10-8 to winning the match.

That toughness showed up with scrappy defense as well as timely, momentum-swinging points. Mulvihill had her share of those, finishing with 19 kills.

“Definitely. I don’t think any ball dropped if anybody was going for it,” she said. “It was always every ball. That’s our mentality, which is really good for us.”

Maybe no one celebrated more with each big play than Mulvihill, who’s going to Concordia University-St. Paul next year. Known for being a big-time attacker, Mulvihill was big all over the court against the Panthers.

“Jas has really been growing into that role,” Willingham said. “She’s taking more responsibility in the backcourt for us now. I mean, it’s hard. It takes away from her other game. But blocking, attacking, just a superb frontline player. Her attitude and her spirit out there, the way the kids go up and down with her, we’re really fortunate to have a player like her.”

One goal for the Cougars this season is to win the conference title. Taking down a rival and league contender early in the season should help, but there’s a long way to go in the tough South Suburban, which also features No. 4-3A Eagan.

Beating the Panthers just solidifies the mindset for the Cougars that they can play with and beat anyone.

“Just knowing that we can play at that high level, and just sticking at that level hopefully all year,” Mulvihill said. “That’s just our goal.” 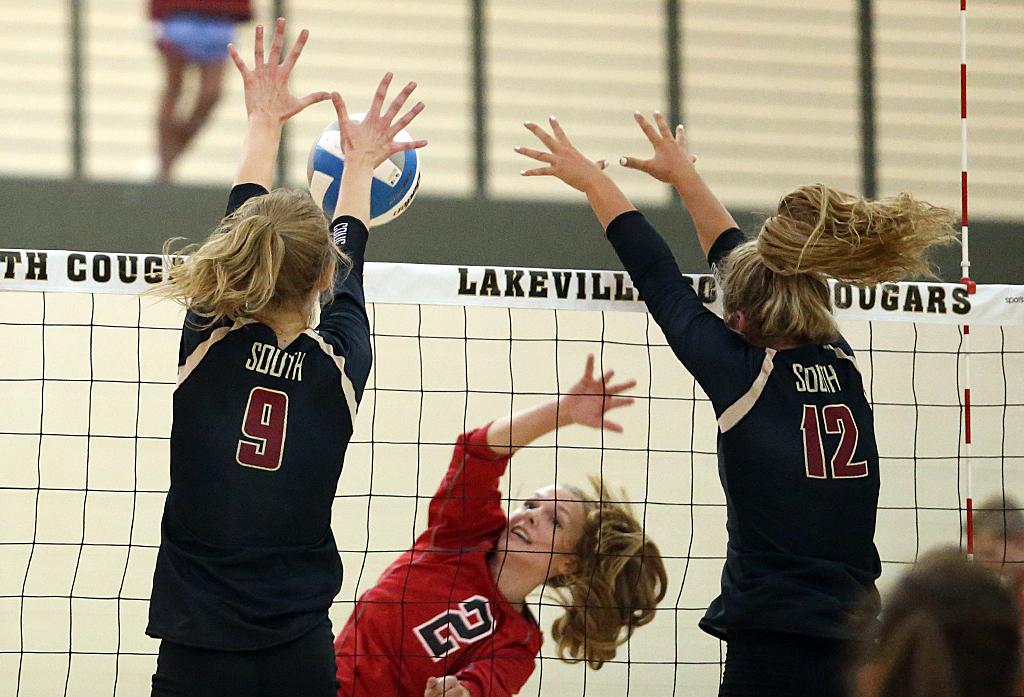 Lakeville South's Nicole Banitt (9) and Jasmine Weidemann (12) go up for the block against Maddy Hornyak (2). The Cougars prevailed in the crosstown rivalry match up with a 3-2 victory over the Panthers. Photo by Cheryl Myers, SportsEngine

In a night set up for plenty of drama and excitement, Lakeville South’s Tuesday win over rival and South Suburban Conference foe Lakeville North delivered.

The first set was played within four points throughout. The Cougars trailed 18-14, but came back to lead, and had four different set points before Lakeville North got the final three points to win 28-26.

Lakeville South responded with three different four-point leads in the second, only to see the Panthers (7-2, 0-1) creep back each time. The Panthers tied the set 18-all, but the Cougars finished on a 7-1 run to tie the match at one apiece.

Lakeville North led most of the third set, and was up 17-15, but Lakeville South closed on a 10-3 run, with a Jasmine Mulvihill kill on set point, putting the Cougars up 2-1 entering the fourth set.

Lakeville South had led 17-13 lead in the fourth and could have clinched, but the Panthers came back on a 7-3 run, with a service error by the Cougars forcing the deciding set.

The Panthers were led by Elizabeth Juhnke and Macy Winter, with each earning 16 kills. Amelia Wherland had 39 assists. 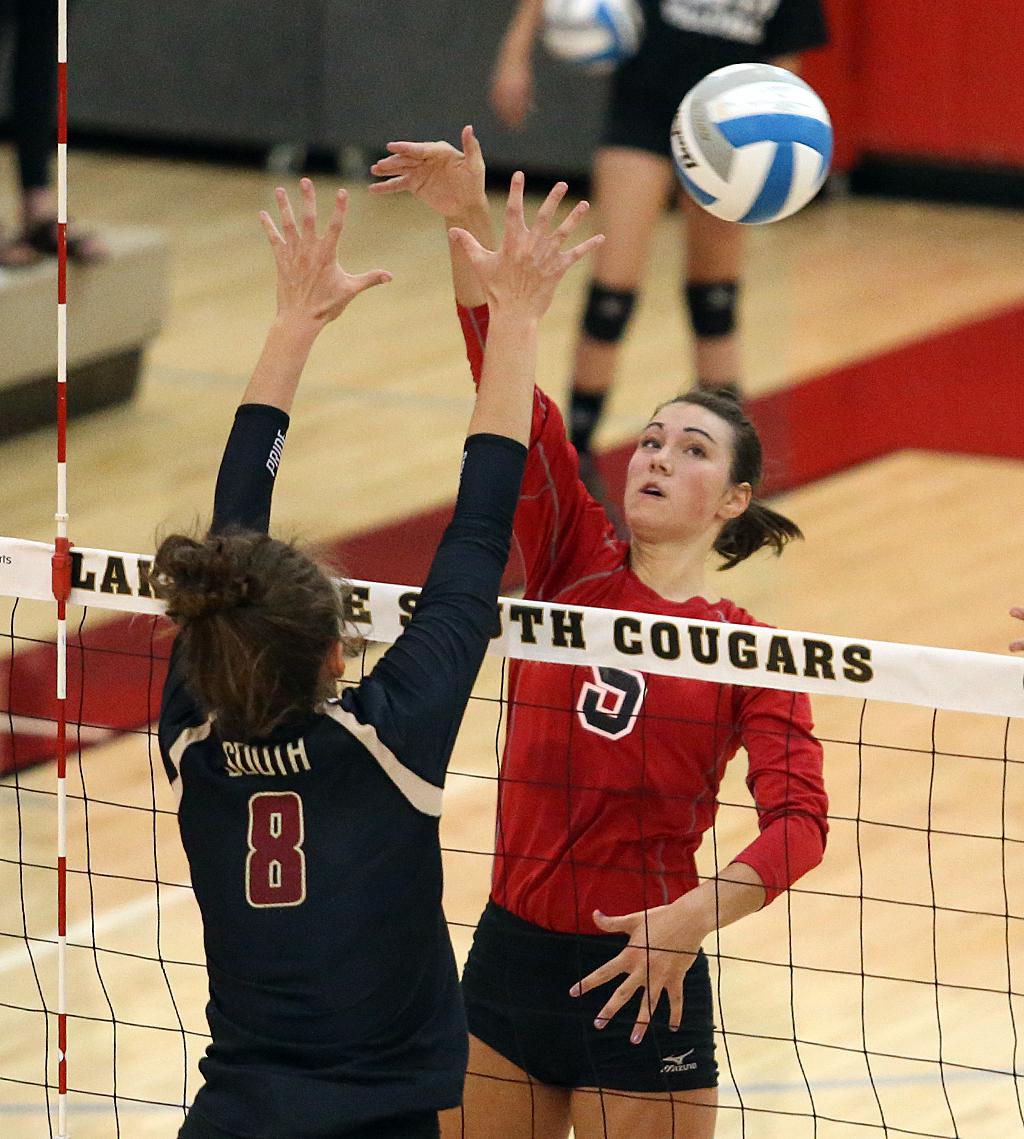