Teammates from the nation’s top Junior Olympic team this summer are now opponents at top prep programs across the Twin Cities and state. 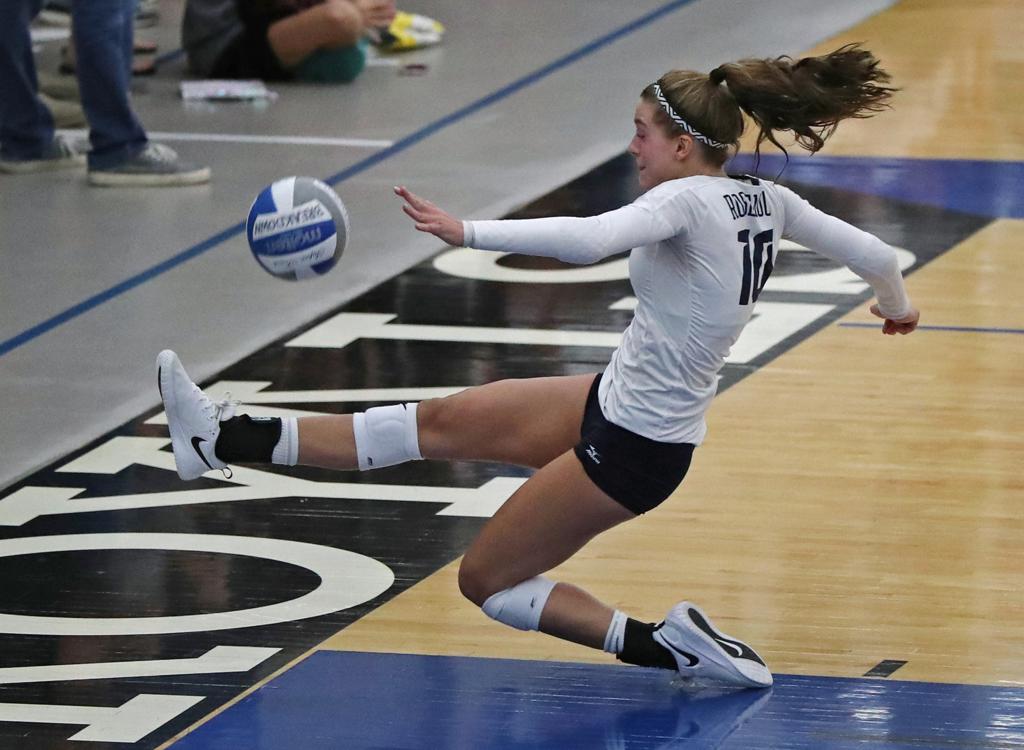 Rosemount defensive specialist Mari Hinkle, who is headed for UCLA after graduating, goes all out to attempt a save in the Breakdown Side Out tournament last month in Hopkins. Photo: Shari L. Gross • shari.gross@startribune.com

A little more than two months ago, the Northern Lights 17-1 club volleyball team was the best Junior Olympic team in the nation. The team won the brutally tough 17-Open Division at the USA Volleyball National Championships in Detroit in early July. The victory, culminating more than eight months of suitcases and sweat, cemented a bond that, for many of the players, began years ago.

“Winning the championship was the best day of my life, so far,” said Mahtomedi’s Kyndra Hansen, a 6-3 outside hitter. “The girls on that team are my best friends. They’re like family.”

Now they’re playing for their respective high school teams, mostly in the metropolitan area. It’s a common occurance on today’s volleytball landscape: The need to balance two aspects of their athletic lives.

Club season can last as long as nine months for the top teams, with players connected by a passion for their sport, coming together mostly on weekends, spiced with frequent regional and national travel. The high school season, by comparison, is short and intense, with daily practices, raucous gymnasiums and differing abilities.

It can seem daunting, and there is an adjustment period, but for these players, it’s simply what they do.

“It can be a difficult transition, but it’s a good challenge,” said Edina outside hitter Christine Graf of going from the high-level of club volleyball to high school volleyball, with its varying skill levels. “I have to adjust the pace a little bit, but I love playing in front of the fans and going to different schools.”

Mari Hinkle’s specialty is not letting the volleyball touch the floor. A defensive specialist for both Northern Lights and Rosemount High School, the hard-nosed Hinkle, who is heading to UCLA next season, said her role on the high school team comes with different expectations. She can play more freely for her club team, knowing she has players around her who can adapt and cover quickly. At the high school level, Hinkle focuses on skill and leadership in equal amounts.

“I have to make sure my passes are perfect, because that’s what we need,” Hinkle said. “I’m also calming the team down, making sure everyone knows we’re going to be fine when we make mistakes.”

After winning the national championship, Hinkle needed a few days to realize that this group she’d played with for so long was at the end of its run.

“A lot of us have been playing together for six, seven years,” Hinkle said. “Winning the championshp was so much fun. It took, like, a day or two before I started thinking ‘I don’t know if we’re ever all going to be together again.’ ”

Despite being on separate high school teams, the club teammates still spend as much time as they can supporting each other.

“We text, we snap, we group-chat,” Hinkle said. “We still talk about the championship. We talk pretty much every day.”

“It’s kind of weird to be playing with the same girls for nine months straight, all day and on weekends, then have to face them across the net,” Husemann said. “When it’s game time, it’s pure competition, but when its over, we hug and we’re happy to see each other.”

They all make time to watch each other’s teams play, whether it be Blythe Rients at St. Paul Academy and Gabby McCaa at Minneapolis Southwest. Or if their teams are nearby, catching teammates Erika Bute of Alden-Conger and Peyton Suess of Kasson-Mantorville play.

The 6-3 Husemann, like Kilkelly, will play at the University of Minnesota next year. Husemann said connections made during the club season are cherished, but she doesn’t feel high school is any less significant.

“Both are unique and fun in their own ways,” said Husemann, who has also experienced two state titles with Eagan. “Winning a national championship was great, but it was just our parents there. It’s kind of cool when your entire school is there freaking out.”

• Champlin Park, with super-setter Izzy Ashburn, was expected to be a top-10 team. The Rebels became a state-championship caliber squad with the addition of uber-athletic 6-1 outside hitter Lauren Clark, a transfer from Armstrong. Clark, who has committed to Penn State, was the only Minnesotan named to the USA Volleyball 18-1’s Open Division all-tournament team at the USAV Nationals in May.

• More proof that Minnesota high school volleyball is on par with the best in the nation: Champlin Park (No. 5), Lakeville North (No. 10) and Eagan (No. 13) were all ranked in the USA Today national rankings.

• Anyone with even a passing interest in volleyball should keep an eye on North Branch junior OH Cianna Selbitschka, who had a school-record 527 kills in 2017.