The senior outside hitter takes her Wildcats into the state tourney aiming to three-peat. 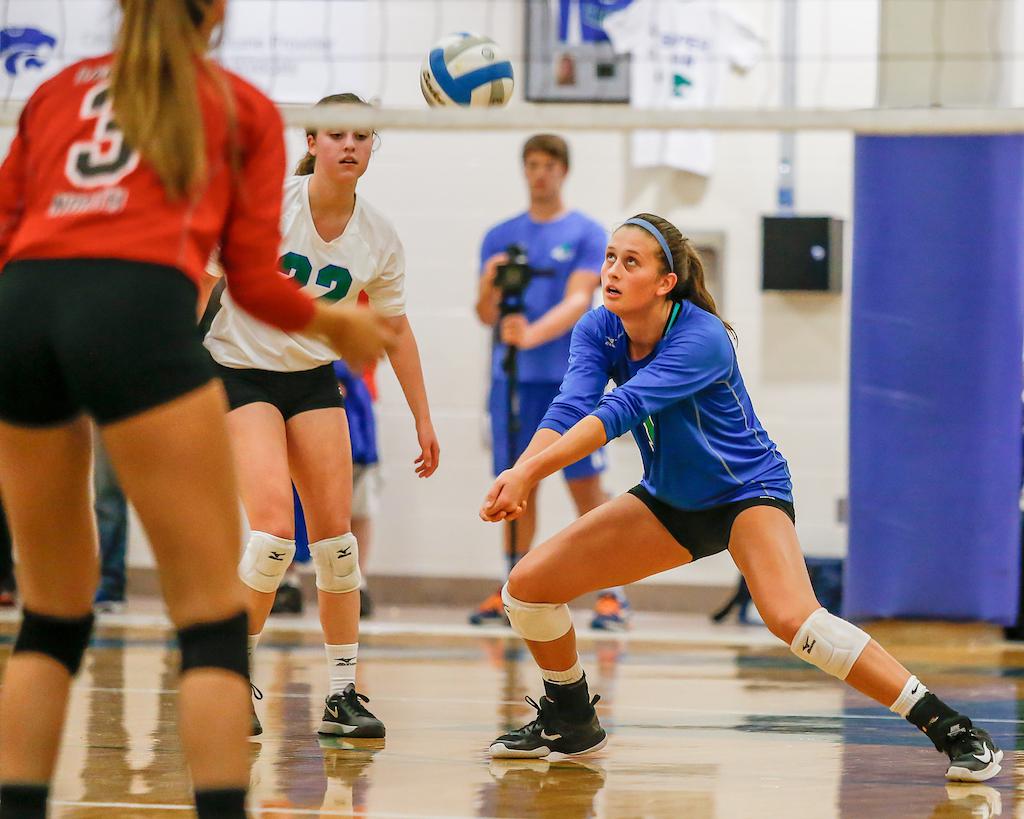 McKenna Melville's familiarity with every role on the court usually allows her to be steps ahead of her opponents. No surprise, since her coach, Hall of Famer Kathy Gillen, is also her mother. “Her gift of knowing and anticipating is just from her being around the game for so long,” Gillen said. “I carried her [to the gym] when she was in a carrier." Photo by Mark Hvidsten, SportsEngine

She stands 6-1, with four inches added in a growth spurt not long ago, bearing arms almost too long for her sleeves. On the volleyball court, Eagan’s McKenna Melville looks right at home playing at the net among the tallest and the longest.

But her preferred stance is crouched low, just behind the 10-foot-line, eyes focused on the net with her arms together, awaiting an opposing attack. She’s skilled at virtually every aspect of volleyball but defense is her foundation, the bread of her game. Everything else is just a condiment.

“Honestly, I love defense,” Melville said. “It’s the first thing. You’re not going to score unless you play defense.”

While stopping the other team is her central to her game, Melville can do just about anything on the court and do it at a high level, one that has earned her the 2017 Star Tribune Metro Player of the Year.

Eagan will be making its fifth consecutive trip to the state tournament this week, having won the last two Class 3A championships and three of the last four. Melville has been a four-year starter for the Wildcats and has never completed a varsity season without a trip to Xcel Energy Center.

She earned that court time through her versatility, spending time at every position, from defensive specialist through a stint as a setter to now, where she’s counted on as the team’s top attacker.

“That’s helped me become the player I am,” she said. “And it helps create stability. We have so many players who can do other things that we can all flow with each other and stay stable.”

The best part of Melville’s game is the least visible. She doesn’t just play volleyball, she thinks it. Her familiarity with every role on the court usually allows her to be steps ahead of her opponents. No surprise, since her coach, Hall of Famer Kathy Gillen, is also her mother.

Having a successful coach as a mother could present problems most players don’t face. Not for Melville. The two have struck a balance between their volleyball lives and home lives.

“We don’t talk much volleyball at home,” Melville said. “We keep it separated. When I’m on the court, she’s the same to me as she is to every player. Then at home, she’s my mom, so even if I have a bad game, she’ll be like ‘Hey, good game.’ But then the next day at practice, she’ll be like ‘Okay, here’s what we have to work on.’ ”

Outwardly, Gillen is all business whenever Eagan is playing. But she admits to finding enjoyment watching her daughter compete.

“I love watching her play, her passion for the game, the fun she has playing. It’s just a bonus that biologically she’s my daughter,” she said.

Melville’s time spent learning from and playing for her mother is nearly over, with one more state tournament appearance left. She’ll play for the Northern Lights club program over the winter and spring and has verbally committed to play at the University of Central Florida next year.

“I try not to think about it, but it’s obviously in the back of my mind,” she said. “It’s almost done. I want it to go on for as long as possible and now it is. So we’re just going to keep going hard and, hopefully, we’ll keep winning.”

See who else is on this year's All-Metro first, second and third teams.

Past Players of the Year