On national volleyball stage, Minnesota's star is on the rise

The state has become recognized as a place to find quality volleyball players. 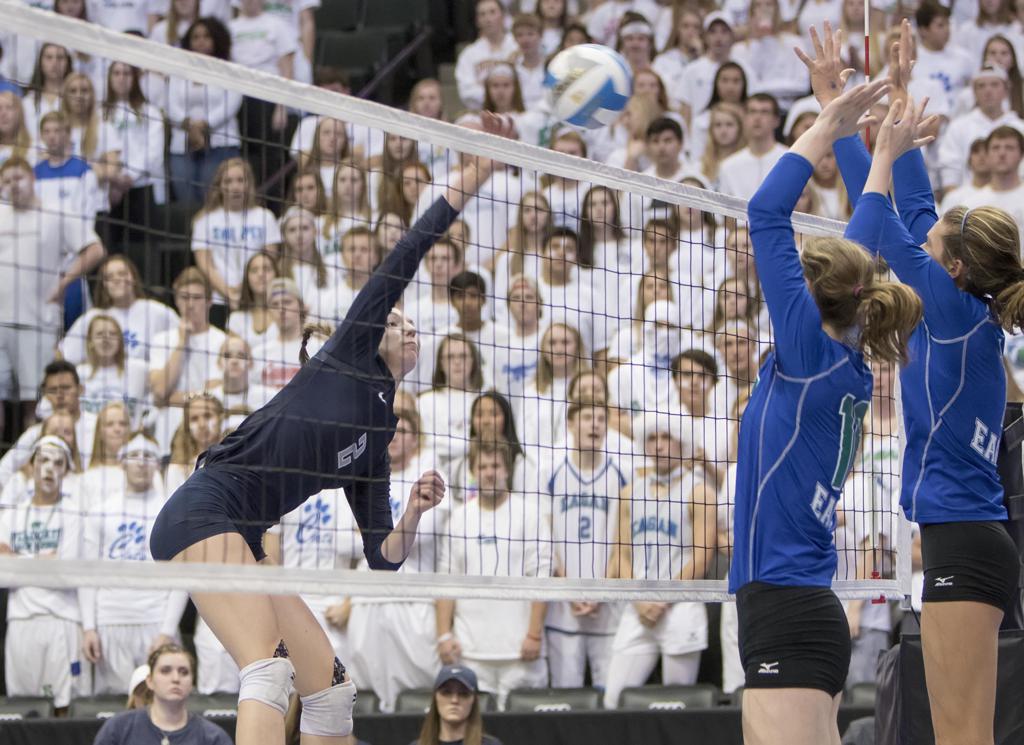 While in Croatia with her husband, Erik, last year, Vicki Swenson found herself repeatedly answering one question from American volleyball players and their foreign counterparts who competed a club tournament in which she was coaching.

“People were wondering, ‘How can we get to play in Minnesota?’ ” recalled Swenson, who also is the volleyball coach at Hopkins. “Everyone knows about volleyball in Minnesota.”

The state long has been recognized as a volleyball hotbed. Larger, more populous states such as California and Texas produce more players, but in terms of quality, the North Star State is the equivalent of a six-rotation player: It takes a seat for no one.

This year, Minnesota has five players among the top 53 in PrepVolleyball.com’s 100 Top Senior Aces, which ranks players according to college potential. They are Sydney Hilley (No. 3) of Champlin Park, Jenny Mosser (No. 11) of Lakeville South, Jasmyn Martin (No. 16) of Hopkins, Brie Orr (No. 52) of Eagan and Claire Sheehan (No. 53) of Cambridge-Isanti. Hilley’s ranking is the highest ever for a Minnesota high school player.

“It used to be that the best teams had two or three great players. Now they’ve got five or six,” Swenson said. “Last year, I think Prior Lake had seven that played college volleyball. Eagan has that this year. We have great coaches, great clubs and great opportunities for players.”

While the reasons for the ascendance into the volleyball recruiting stratosphere are many, most agree that the sport would be nowhere its current level had it not been for the hiring in 2012 of Hugh McCutcheon as coach at the University of Minnesota.

McCutcheon has coached Team USA men’s and women’s volleyball teams to Olympic gold medals and is internationally revered as a coach and teacher. Combining his renown alongside the preponderance of top high school teams and club programs has brought Minnesota to a level few anticipated. The perfect storm of elite coaching, top talent and second-to-none facilities.

“California and Texas are always No. 1 and No. 2 in developing players and rightly so, but Minnesota has not fallen out of the top 10 in the last 20 years,” said Wayzata coach Scott Jackson, who is the director for Minnesota Select, one of top volleyball clubs in the nation along with Northern Lights. “The level of talent in this state this year is top three.”

Under McCutcheon’s tutelage, the Gophers are in the midst of one of their most successful seasons. With state-bred players such as twin middle blockers Hannah and Paige Tapp of Stewartville and three-time Big Ten setter of the week Samantha Seliger-Swenson of Hopkins (Vicki’s daughter), the Gophers are No. 2 in the most recent Division I poll.

In contrast to the Gophers basketball programs, getting local volleyball athletes to stay and play home is not an issue. The problem is the depth of talent: Too many willing players for too few spots.

“Minnesota is a destination for high school players,” said Jeff Groves, an assistant coach at Apple Valley and director of the Minnesota High School Volleyball Hall of Fame. “There are only three sports in which Minnesota can complete for the top players at a national level year-in and year-out and those are boys’ and girls’ hockey and volleyball.”

McCutcheon has had top-rated recruiting classes in each of his five previous seasons with the Gophers. There’s another on the way next year, led by Martin, a 6-3 middle blocker who is the only Minnesotan in the group. It’s a numbers game. There are only 12 scholarships and 18 players on a roster.

“Hugh has been so successful at every level that I count myself lucky to get this opportunity,” Martin said. “Girls flock to Minnesota, wanting to play for him, but not everyone gets the chance ”

McCutcheon said his philosophy is focused on national championships but stressed that Minnesota players are vital to that goal.

“We absolutely want to keep the best players close to home, assuming it’s the right fit for them and our program,” he said in an e-mail to the Star Tribune. “The reality is that not every position has an open scholarship each year. Overall, we think our responsibility is to recruit and train the best student-athletes we can to represent the U of M.”

Competition for time is intense

Inevitably, there are going to be disappointments. Hilley, a two-time USA Junior National Team member, chose Wisconsin over the Gophers because she knew playing time might be scarce.

“I guarantee, nearly all of the top players wanted to play at Minnesota,” Groves said.

There are no hard feelings, however. In fact, that selectiveness has made Minnesota teams and clubs hungrier. Gophers assistant coaches Matt Houk and Laura Benzing Kasey are routinely in demand by local clubs, teaching McCutcheon’s methods.

And McCutcheon’s reputation as a teacher, developer of talent and supporter of volleyball at all levels make him beloved in the volleyball community.

“He’s got a following, and it’s deserved,” Swenson said. “People seek him out. I’ve seen groups of girls follow him around, trying to get their picture taken with him. There’s a great deal of excitement around him and his staff. Every player in the country is aware of who he is.”

McCutcheon knows what his prominent profile brings to Minnesota and has embraced it. He has made developing volleyball in Minnesota a priority.

“We strive to be a program that the university and the state can be proud of,” he said. “We hope to inspire and ignite younger volleyball athletes to want to compete at this level. We think we have a responsibility to be positive role models for younger women in sport and in life. It’s something we take very seriously.”

A sampling of some of the college commitments of metro volleyball players: