The Redhawks beat the Panthers in four sets on Thursday evening. 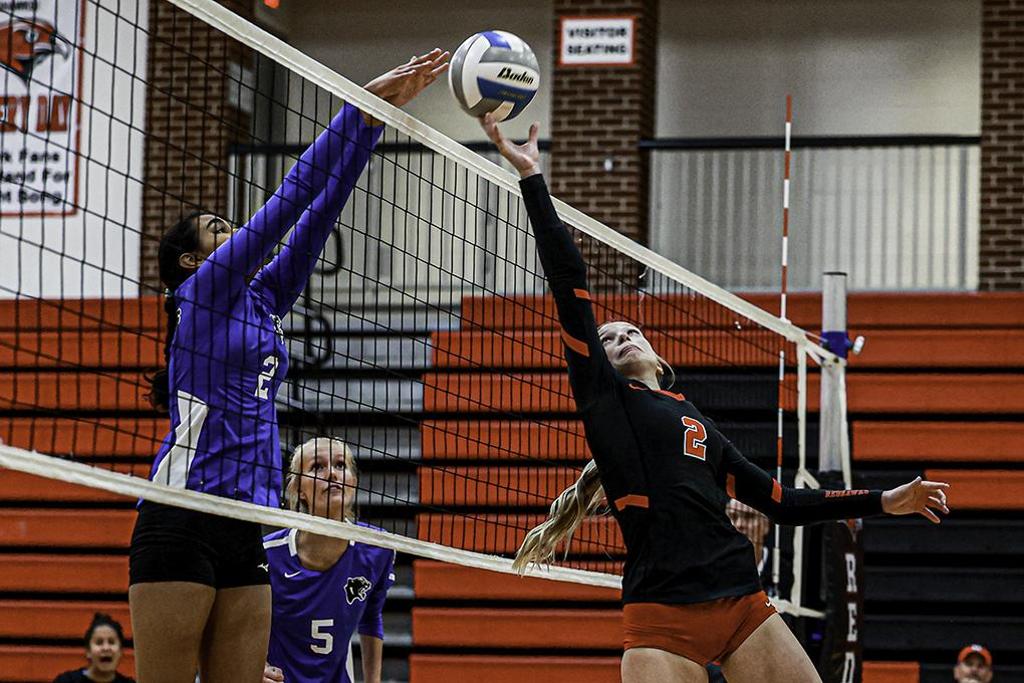 It's been one game, one set, one point at a time for Minnehaha Academy's volleyball team this fall.

And so far, that formula has added up to nine, as in nine consecutive victories to start the season. Thursday's four-set victory (17-25, 25-14, 26-24, 25-17) over visiting and defending Independent Metro Athletic Conference and Class 2A, Section 4 champion Mounds Park Academy allowed the Redhawks (9-0, 2-0) to check off one of the goals they set for themselves prior to the season. 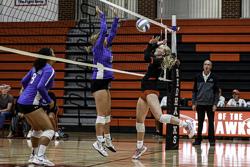 "This was big," Minnehaha Academy coach Kim Benka said. "This was a big goal for us."

The Redhawks' goals have been getting bigger every year. Minnehaha Academy finished 14-13 last season for its first winning record in six seasons. Beating a strong Mounds Park Academy squad that upset top-seeded Southwest Christian in the first round of the Class 2A state tournament last fall was another big step in the long process of program-building at Minnehaha Academy.

"It's been a growing process," Benka said. "We're such an athletic school and we've been trying to build up the volleyball program. It's been fun to see the growth every year."

After winning 19 games in 2015, the Redhawks won 11, eight, eight, seven and five games over the next five seasons. But with players such as junior outside hitter Maddy Benka (the coach's daughter) and seniors Violet Sahlstrom and Camryn Thurow, Minnehaha Academy has improved rapidly. And while it's still early in this season, the Redhawks players are feeling success and learning what it takes to sustain it.

It has shown in the first four games after the Redhawks' 5-0 showing at the season-opening St. Paul Humboldt tournament. Minnehaha Academy has needed four sets in each of its four games since. Mounds Park Academy started Thursday by winning the opening set 25-17.

It's an attitude the Redhawks are beginning to assimilate.

Mounds Park Academy kept Maddy Benka from making a big impact at the net and walked away with the first-set victory. But Minnehaha Academy freshman Vivien Affeldt served five consecutive points to start the second set and set the tone for the rest of the match. The Redhawks' serves were on point while Mounds Park Academy struggled to return serve, taking the ball out of the hands of their talented junior setter Else Kunze-Hoeg, who in nearing 3,000 career assists.

It didn't help the Panthers that senior hitter Lola Pilon remains a limited participant as she recovers from a torn anterior cruciate ligament suffered in a semifinal loss at last fall's state tournament. Pilon played only in the back row on Thursday and still looked hesitant on her recovering leg. While she did help settle her team's handling of the serve in the third game, it wasn't enough against the Redhawks.

The teams will play again on Sept. 27, and Kim Benka said she expects another tough test for her team. 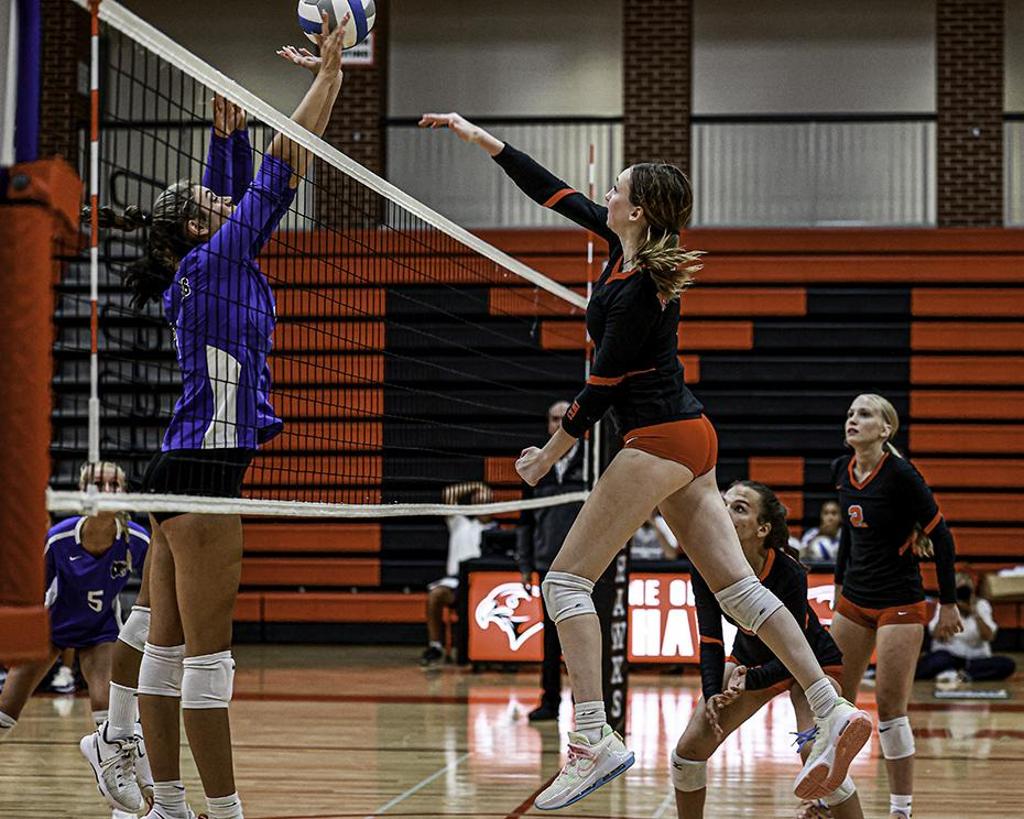 Mounds Park Academy had a plan to slow down Minnehaha Academy hitter Maddy Benka (1), but the junior got this ball past Addy Kluz. Photo by Mark Hvidsten, SportsEngine

Minnehaha Academy kept its own streak alive while ending another for Mounds Park Academy on Thursday with a 17-25, 25-14, 26-14, 25-17, four-set victory over the visiting Panthers.

The victory, the ninth in a row to start the season for the Redhawks (9-0, 1-0), was also the first Independent Metro Athletic Conference loss for Mounds Park Academy since Nov. 12, 2020, a span of 12 games. The Panthers went 11-0 in IMAC play in 2021 on their way to a Class 2A, Section 4 championship and place in the state tournament.

The Redhawks, who began the season with five victories at the St. Paul Humboldt tournament, won their first eight games away from home. Minnehaha Academy won 14 of 27 games last season to break the .500 mark for the first time in six seasons.

The game featured the return to play of Mounds Park Academy senior Lola Pilon, who suffered a torn anterior cruciate ligament during the Panthers' state tournament semifinal loss last November. She played sparingly and only in the back row but Mounds Park Academy coach Jeff Kunze-Hoeg said he expects the hitter to be back into the full rotation within a couple of weeks. 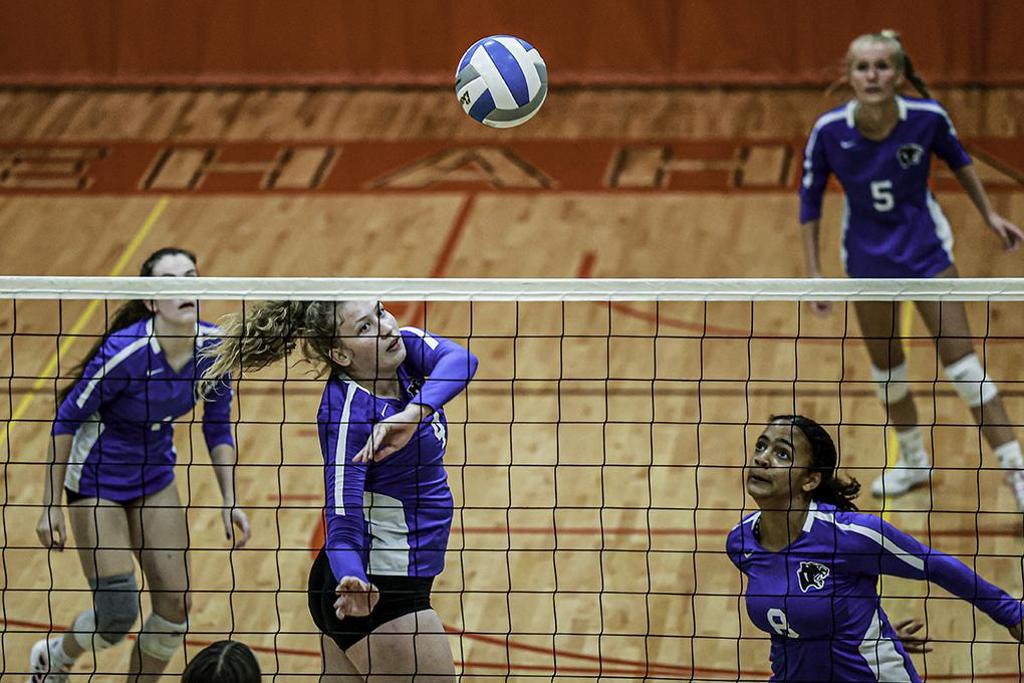 Mounds Park Academy's Else Kunze-Hoeg (second from left) tipped the ball over the net. Photo by Mark Hvidsten, SportsEngine