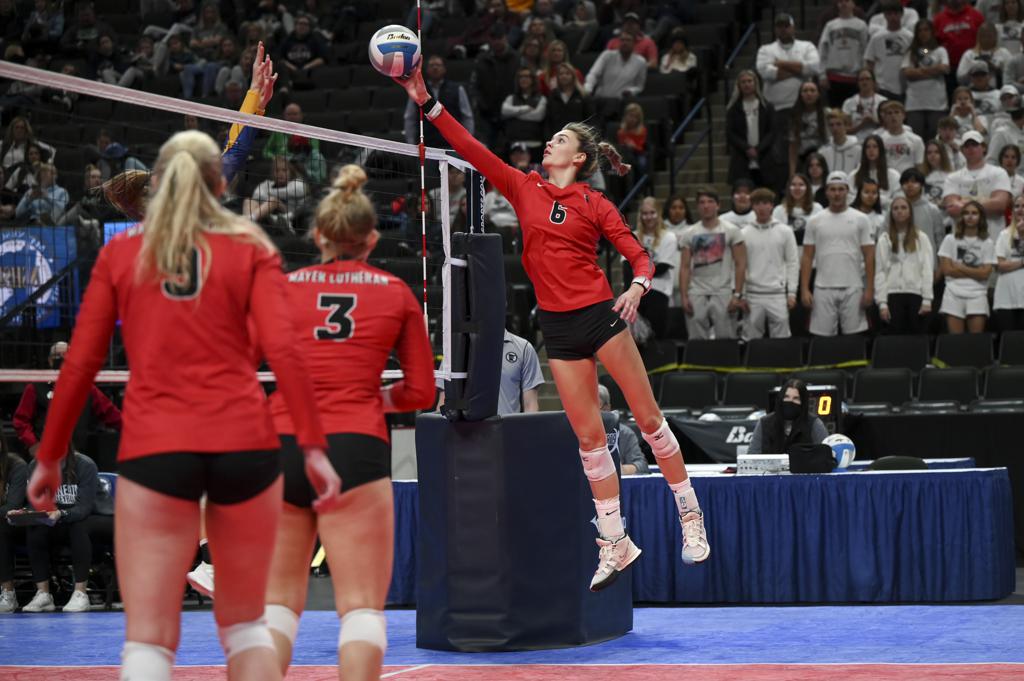 Mayer Lutheran right side hitter Madeline Guetzkow tapped the ball over the next against Minneota during the Class 1A volleyball championship match [Aaron Lavinsky, Star Tribune]

Sometimes it’s too tempting to look at possibilities ahead, like who your team might face for a championship. Sports cliches like “one game at a time” aside.

Mayer Lutheran coach Joelle Grimsley definitely looked.
“The beginning of the year, we played Minneota the very first match,” Grimsley said. “All of us coaches said ‘this is what it’s going to come down to. Our last match of the season will be Minneota versus Mayer Lutheran.’ You have to plan for that.”

Senior Lilly Wachholz had a match-high 17 kills, giving her 39 for the tournament and 376 for her career. Her cousin, junior Gabrielle Wachholz, had 11 kills and 10 digs, while junior Stella Maass recorded 10 kills, including four during the team’s 9-0 run to pull away in the third set after trailing 7-5.

“When they went on that little run, we just had to know in our minds, we couldn’t give up and we couldn’t let them go on more of a run,” Maass said. “We had to stop it there. And then we had to go on our own run and play our game.”

The Vikings got 10 kills and 11 digs from senior Natalee Rolbiecki, along with 13 kills from junior Ireland Stassen.

“I thought later on in the match we did a much better job defending and adjusting to them (Mayer Lutheran),” Minneota coach Hayley Fruin said. “But started out just a little bit on our heels, and you can’t do that against a great team like that.”

Minneota, which had won the previous two state tournaments in 2018 and 2019, finishes with five losses on the season — three at the hands of Mayer Lutheran.

The Crusaders defeated Minneota in five sets to open the season and again on Sept. 25 in invitational play.
With her team all in sync, this was by far the Crusaders’ best match of the season, Grimsley said.

“We peaked at the right time,” she said.

They also kept Minneota guessing. Maass said they “got in their heads and let them make the mistakes.” Minneota made 22 attack errors compared to 11 for Mayer Lutheran.

Lilly Wachholz made her final kill to end the match, later saying she “couldn’t have asked for anything else” to end her senior year.

“I think it’s a proud moment for us,” the Crusaders’ Gabrielle Wachholz said. “This was our ultimate goal.”

Grimsley has coached the Crusaders for 26 years. She teared up talking about what this particular championship team means to her.

“The joy that they felt at the end was something I’ve never seen,” Grimsley said. “And last year, I think, was part of it, being not able to possibly be here.

“Seeing the joy on their face, and the tears coming out. They couldn’t even stop it.”