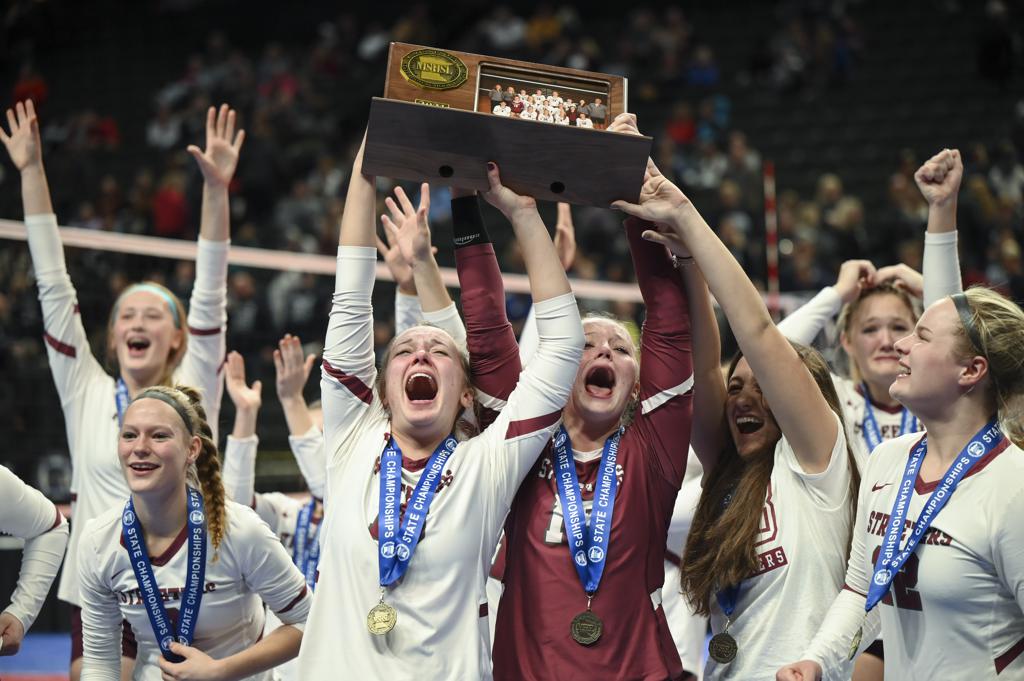 Early in the first set of Sauk Centre’s 13-25, 25-21, 25-17, 25-19 victory over Jackson County Central in the Class 2A championship match, Mainstreeters coach Jim Klaphake admitted that the team he saw on the court was far different from the team he knew.

“I talked to the girls about how we wanted to come out and play. That was not it,” he said, recalling a disastrous first set in which Jackson County Central practically refused to make a mistake. “I said, ‘They just punched us in the mouth. Now, we need to react.’ ”

They reacted in the best way possible, winning three consecutive sets with defense that got better in each set and a diverse offensive attack.

Sauk Centre opened up a narrow lead in the second set, rode it to victory and built on that improvement for the rest of the match.

“We just had to settle down,” Klaphake said. “We were a little nervous. Once we settled down, we were fine.”

He was especially impressed by his players’ ability to block out the surroundings and the circumstances and all the pressure that went along with them.

“You see professional teams fold up after someone gets a run on them like they did that first set,” Klaphake said. “We’re talking about high school girls. They had that ability to just bear down and focus.”

“We’ve been working all year on trying to ignore the crowd, especially the student sections,” said senior Emma Kittleson, who finished tied with teammate Jenna Gapinski-Vogt for the team lead with 11 kills.

By the time the Mainstreeters finished off the third set, winning nine of the final 10 points, Klaphake was satisfied, knowing the team that had won 29 matches in a row leading up the finals was back.

“To be honest, they were so fired up, I was thinking ‘settle down,’ ” he joked, eliciting laughs from his players. “You want them to be able to concentrate. It was like ‘OK, we’ve still got one more set to go here.’ ”

It was Kittleson who constantly spoke of winning a state title during the season. As it went on, the rest of the players began to buy in.

“All of us have wanted to go since we were little girls,” said senior libero Madeline Nelson, recounting a list of tournament championships that helped the dream coalesce. “We couldn’t imagine doing this for different people or a different community. We’re proud to be here.”