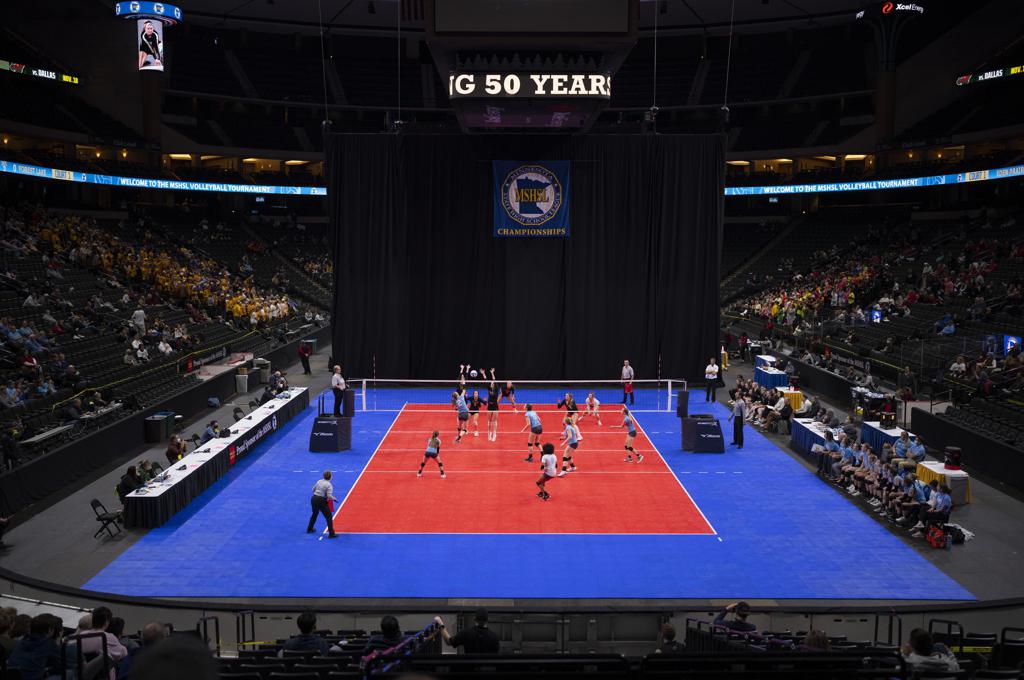 Top-seeded Marshall coach Dan Westby felt like his team was dialed in from the very first serve of its Class 3A semifinal match against 5-seed Grand Rapids. His Tigers dominated with a 25-9, 25-11, 25-12 sweep Friday to advance to their 14th state title game in program history in their 30th state tournament trip.

“We just started off really confident,” said junior outside hitter Leah Jones. “We knew that we could play hard and play fast, and we were also able to spread the ball around.”

Marshall started off winning five straight points, and then made only one attack error in the first set compared to 10 for Grand Rapids. The Thunderhawks stayed within reach early in the second set, getting within two points of Marshall’s 12-10 lead. But the Tigers grabbed momentum right back with an 8-0 run that turned into a 13-1 run to end the set.

Grand Rapids took an early 4-3 lead in the third set, before the Tigers roared back with five straight points to regain the lead once again.

“They play very clean volleyball,” said Grand Rapids sophomore setter Braya LaPlant, of Marshall. “They were able to pick up on a lot of our shots that we were trying to take. They were very scrappy, and they just made sure the ball never touched the floor.”

The Thunderhawks (21-10) struggled offensively, said their coach, Bekah Sutherland, adding it’s something you can’t do against a team like Marshall. Grand Rapids recorded 23 kills and 25 attack errors.

The Tigers were last in the state title game in 2018, finishing as the Class 2A runner-up to North Branch in a five-set match. The Tigers’ last state titles came during a three-peat of 2A championships from 2011-13.

Westby said that “without a doubt” his team’s schedule throughout the season prepared the Tigers to get to this point, the state championship game. They played challenging tournaments every two weeks, in Marshall, Apple Valley and finishing at Lakeville North, where Marshall went 5-0 against Class 4A programs.

“I think it was at that point where our kids really started to believe that they could really do something special with this season,” Westby said. “I think they really haven’t looked back. They’ve always wanted more throughout this playoff run.”

Jones and junior libero Caitlyn Christenson agreed that their team feels prepared for the title match.

“I think it showed us that we can play together and we can do this thing,” Christenson said. “And we have the talent to do it.”

Kasson-Mantorville was two points away from the championship match, up two sets to one in the Class 3A semifinal against New Prague. The 2-seeded KoMets finished off the victory on senior Annika Larson’s team-leading 24th kill of the match, though they had to fend off a New Prague rally first before celebrating the 25-19, 21-25, 25-17, 25-22 victory.

The KoMets (30-3) were up 22-13 and then 23-15 in the fourth set before New Prague rallied for six straight points looking to force a deciding set.

“I probably lost two, three years of my life there in those last 10 points,” said KoMets coach Adam VanOort. “But it’s how it should be. It’s not supposed to be easy.”

To start the match, the KoMets made it look easy. They continued their strong serving and managed 7 of their 11 service aces in the first set. Eleven aces matched their total from their quarterfinal match against Sauk-Rapids Rice.

After New Prague evened the match at a set apiece, the KoMets used a 9-2 run to take a two-sets-to-one lead. The KoMets built up a big lead in the fourth set before surviving New Prague’s rally. VanOort said his team stay just poised enough to not get rattled.

“It was definitely nerve-wracking,” said junior Whittney Deno. “But we all just tried to stay poised and confident because that’s how we’re going to score.”

VanOort was pleased with his team’s defense, bringing junior Aryss McAdams, senior Caitlynn Wanous and Deno into the postgame news conference and introducing them as “the foundation of our back-row defense.” Deno led the team with 24 digs, Wanous had 20 and McAdams added 18.

“That’s amazing numbers,” VanOort said. “We kept the ball off the ground, which we have to do as a smaller team.”

Offensively, sophomore Ellie Ask had 16 kills and Deno added 14 of her own.

The match was a battle, said Trojans coach Greg Sayuk, which he expected for two teams who play relentless defense. The Trojans just ended up on the wrong side of the scoreboard, he added.

“I think we started off a little rough,” said senior Shelby Bolar. “We didn’t play to our full potential.”

The KoMets reach their first state title match since 2002 when they finished as the Class 2A runner-up.