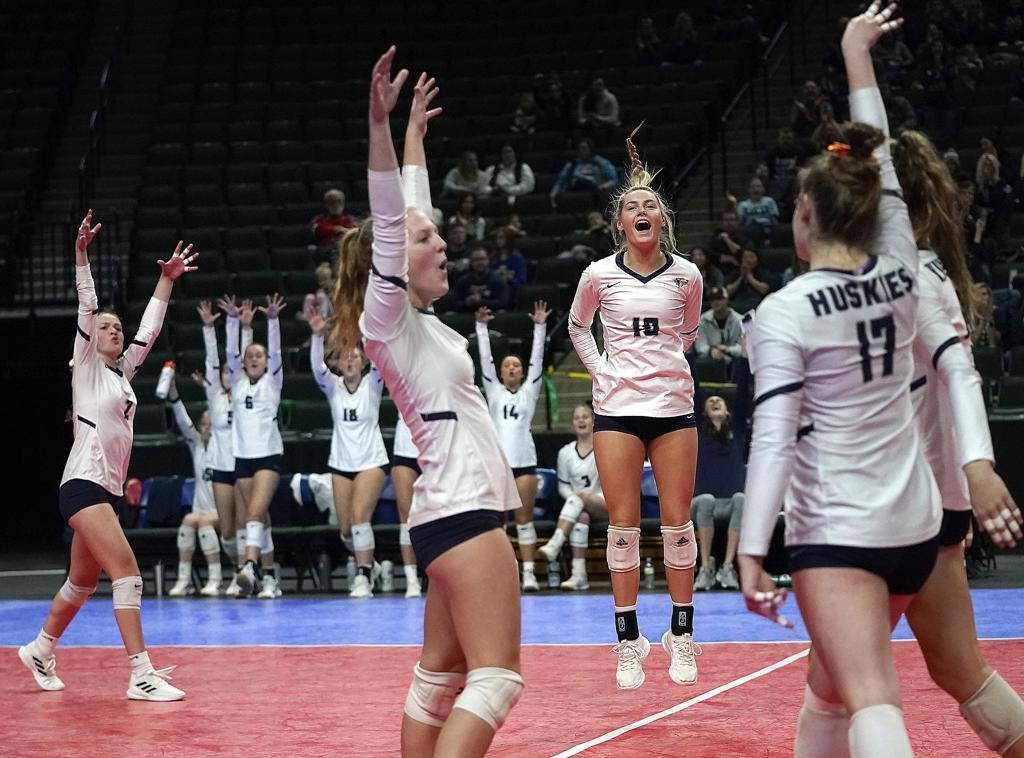 Jackson County Central celebrated a point during the third game of the Class 1A semifinals vs. Mounds Park Academy on Friday. (David Joles, Star Tribune)

One day after pulling off the biggest shocker of the tournament, Mounds Park Academy looked poised to do it again.

The Panthers had surprised No. 1-seeded Southwest Christian, with a five-set victory in the Class 2A quarterfinals and had just evened their semifinal against Jackson County Central with a rousing victory in the second set, closing it out with seven straight points.

Undersized, perhaps, but the Panthers had already showed themselves to be resilient. Could another upset be brewing?

Unfortunately, fate stepped in and dealt Mounds Park Academy a blow from which they couldn’t recover.

Down 12-7 in the third, the Panthers exceptional hitter, Lola Pilon landed awkwardly on her right knee and fell to the floor. The injury not only sapped much of the energy built up with their second-set victory, it took their most dynamic offensive force out of the match.

“Having won that second game, it brought back memories of yesterday’s match,” said Mounds Park coach Jeff Kunze-Hoeg. “But when you lose one of your top players, everybody was more concerned about Lola. She’s a phenomenal athlete. To lose her at that point of the match, it’s obviously going to be a shock.”

The Panthers didn’t roll over, despite missing the powerful Pilon, and leaned on their first-round result to keep the match alive.

“We were still bringing positive energy. They said, ‘Hey, we’re not going to lay down. They still need to earn every single one of their points,” Kunze-Hoeg said. “You saw that. We had a lot of long rallies. They still had to play in order to beat us and I’m proud of that fact.”

Jackson County Central coach Deidre Wierson said the loss of Pilon was felt on their side, too. “It’s just really unfortunate for anyone on either side of the net to go down. The message for us was to care about them and also know we had to be ready. We can’t play flat.”

The loss of Pilon may have cast a shadow over the match, but the Jackson County Central (29-6) players were thrilled to be one match away from the programs’ first state championship since 2003.

“This is unreal,” said outside hitter Sadie Voss. “This has been my dream since I was little.”

With a straight-set 25-23, 25-15, 25-23 victory over Hawley in the Class 2A semifinals, Sauk Centre is right where they’ve always wanted to be but never thought they would reach – one match away from a state championship.

“This is what I’ve dreamt of ever since I knew what volleyball was,” said senior Emma Kittleson, emotion dripping through every word. “Just getting to state has always been my dream. Being in the championship? That doesn’t seem real to me.”

“It hasn’t hit me yet,” said Jenna Gapinske-Vogt. “It’s so exciting.”

The Mainstreeters improved to 32-1 with their 29th straight victory. Coach Jim Klaphake admitted that despite his team’s gaudy record, they may have been underestimated before the tournament.

“We have a great team. We didn’t win 30-some games in a row by fluke,” he said. “I don’t thin we got ranked in state until halfway through the season. To be honest with you, I think we’ve been playing with a chip on our shoulder for a long time.”

Hawley, newcomers to the tournament, struggled with the front row size of Sauk Centre. “It’s scary seeing them up there,” said Allie Eilertson. “You have to find ways to hit around them instead of letting them get up on you.”

Klaphake may have thought highly of his team, but he never foresaw a state championship possibility.

“Playing on the last day of the season? No,” Klaphake said honestly. “I thought this was going to be a good team. It’s a great team.”