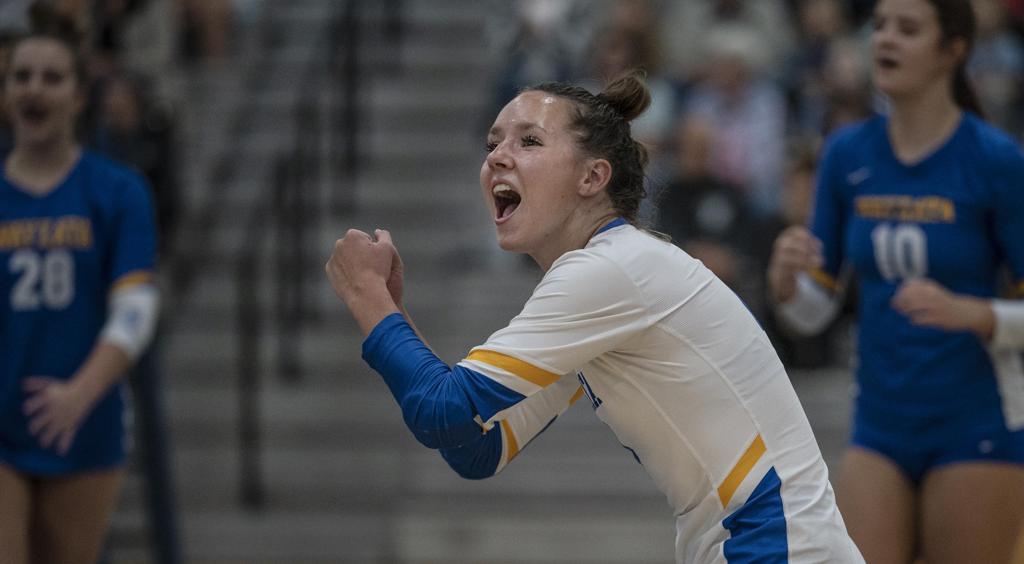 The opponent smacks a ball her way. She sets herself, almost instinctively, and reflexively gets below the oncoming ball. It bounces off her arms, rebounds softly into the air, in a perfect spot for teammates to play it.

Two touches later, the Wayzata volleyball team registers another point. Voegele throws her arms in the air, screams in excitement and practically prances to meet her teammates in a congratulatory circle. She’s the shortest, and loudest, player on the court, congratulating teammates, calling out encouragement and buzzing with positive energy.

“Ella’s just awesome,” said teammate and best friend Sierra Moore, an outside hitter. “She’s always focused and in your face, hyping you up. And she’s a phenomenal libero, the best I’ve ever seen.”

Voegele’s volleyball career hasn’t played out as she dreamed it would. It’s been far better.

When the senior began playing organized volleyball at age 13, she, like a lot of young players, envisioned herself making big arm swings, pounding kills and stuffing balls at the net.

But reality quickly stepped in.

“My first season in club, I was an outside [hitter],” Voegele remembered. “The next season, I made the top team. The coach took me as an outside, but she changed me into what I am now. She realized that, at 5-foot-4, I was lot better at defending than I was at hitting.”

The realization didn’t come easy. “I was disappointed,” Voegele admitted. “But I’m so glad that it happened.”

It’s a strictly defensive position — often referred to as a defensive specialist. A libero cannot play in the front row, cannot send the ball back over the net by contacting it above the net and cannot set the ball for a teammate. A libero wears a different jersey from the rest of her teammates, signifying her position, similar to a soccer goalkeeper.

The position came into prominence on the international scene in 1998 and was adopted in by the NCAA in 2002, with high school volleyball quickly following suit.

It’s a position that requires quickness, agility and well-honed reflexes, the intelligence to understand and anticipate the opponent and a large helping of humility, as being a libero is often a thankless position.

Those are all qualities that Voegele has in excess. Wayzata has won 47 straight matches, a streak that starts with Voegele. She has been a starter for the Trojans since 2019 and was a vital cog in their run to the Class 3A state title that year.

“We had a really good lineup set going into that year. The only question was ‘Who is going to be our libero?’ ” said Wayzata coach Scott Jackson, who also runs the Minnesota Select club program in which Voegele plays. “We had other very good players in the gym, but we knew by about the second practice that she was going to be our libero.”

As a young player still learning her position, Voegele said that season was perhaps the most impactful of her career.

“I was a sophomore playing on a state championship team and playing on the same level as these senior girls and I just felt like, ‘Hey, this is where I’m supposed to be right now,’ ” Voegele recalled.

Voegele is now the Trojans’ senior leader. She is endlessly energetic and unfailingly positive, and along with her ability to dig just about any ball, Wayzata doesn’t win without her as the first line of defense.

“You win with defense, right?” Jackson asked. “She’s our quarterback on defense. She’s our leader.”

Moore recalled a club tournament in Las Vegas. In an important match, Moore was inserted into the front row, unsure and nervous.

“I’m not the tallest blocker, but Ella came up to me right away and said ‘Hey, you got this. We need you. Let’s freakin’ go!’ ” Moore said. “I was so hyped up by that. She knew just what I needed.”

Voegele said that part of her role, being the player the team looks to for confidence and direction, is the most satisfying.

There are times when she still longs to get one good attack in — she got her first statistical kill of the season with a perfectly placed return of a free ball that clinched the first set in a victory over highly regarded Champlin Park. “Did you set that?” Voegele gushedexcitedly.

But being a libero is what drives her. It’s earned her a scholarship to play at the University of North Carolina-Greensboro next year as well as the affection of her teammates and the respect of opposing teams.

“She’s the best in the state,” Jackson opined. “That’s what I think.”

Says Voegele simply, “I love being a libero.”