Senior rightside hitter Sienna Ifill led Eagan in the sweep with 12 kills in the match. 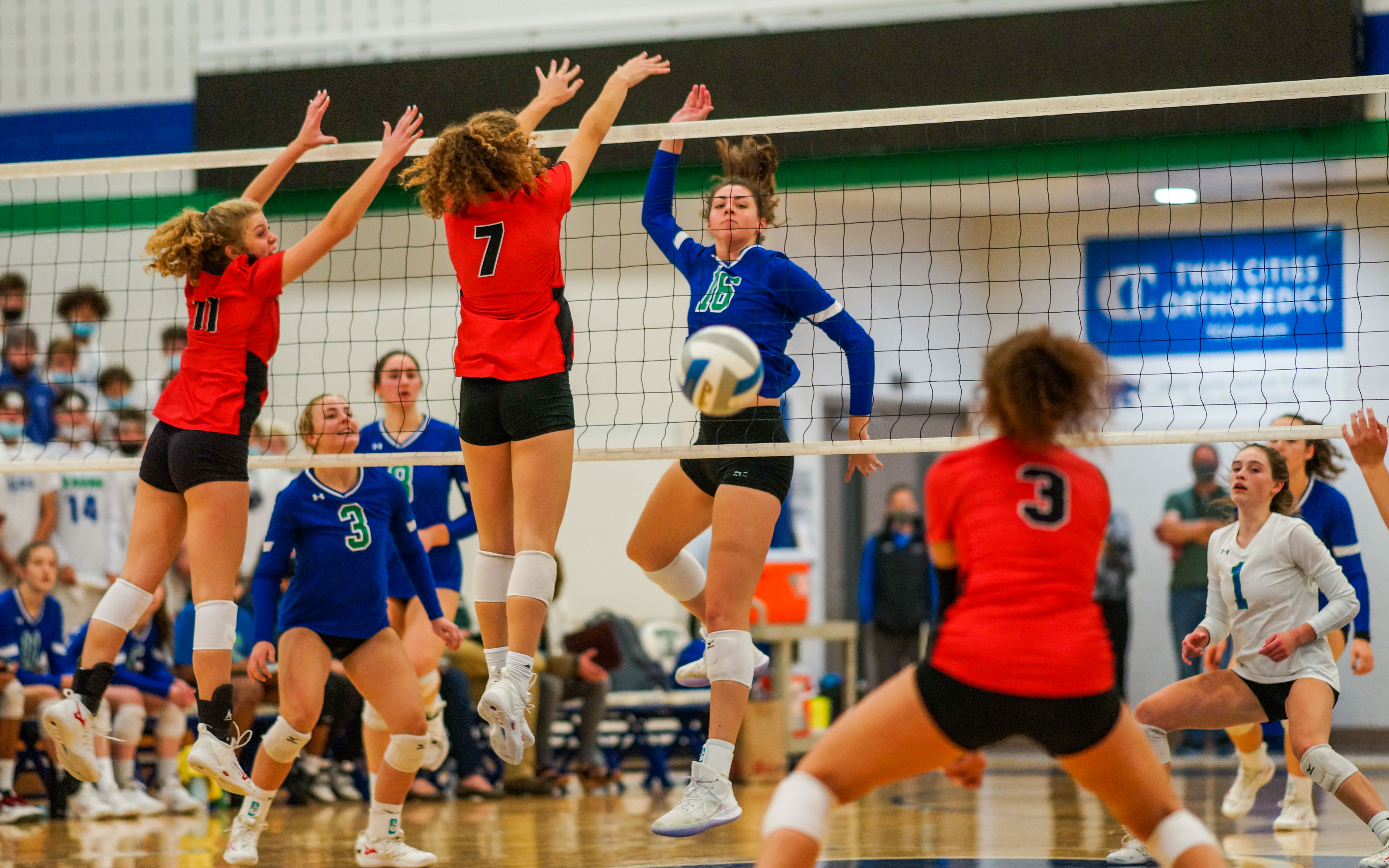 Eagan's Kendal Kemp (16) watches one of her kills get past two Shakopee defenders during play Wednesday night. Photo by Korey McDermott, SportsEngine

It was a rubber match with more on the line than simply a winning record against the other.

The winner would be in the driver’s seat for the South Suburban Conference title, while the other faced work to do just to claim a share of the crown.

Both Eagan and Shakopee had mirroring success throughout 2021 to climb inside the top three in the Class 4A coaches’ poll in advance of Wednesday’s match.

“I think it’s absolutely harder to play them for the third time,” Eagan senior right side hitter Sienna Ifill said. “The first time it’s brand new, the second time one team has something to prove, then that third match I think is mentally definitely the hardest. It’s a real battle.” 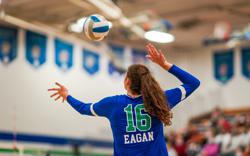 Shakopee’s pesky defense had the Sabers poised early on for an 8-6 lead in the opening set. A challenging block kept Eagan at bay, but Ifill and the Wildcats eventually got the offense humming.

The 6-foot-1 Marquette commit Ifill had seven of a match-high 12 kills in the first set. The Wildcats mounted a 12-1 run to run away with the first set.

She credited her squad’s improvement in serving and serve receive within the match as a key.

Eagan head coach Kathy Gillen expected Shakopee to come out hot, but she had confidence her team could weather the storm.

“I don’t think we played any differently,” Gillen said. “Teams come in ready to beat us. Emotions are high, so it always takes a little bit before we settle down and get in a rhythm. But I don’t think much changed, statistically, early in game one to game one later, they just played a little better in the beginning.”

“I thought our girls played real solid against a very good team. Even when we won a few points in a row, it was a battle every point,” Gillen said. “We expected that. There was a lot of defense early on.”

One of the more dominant sets in this late-season run came in the second frame Wednesday. Seven different Eagan players recorded at least one kill in a set it controlled after Shakopee took the first point.

Senior 6-foot-5 middle blocker and Auburn commit, Kendal Kemp, followed Ifill with seven kills. Three of them came in the second. She was one of a few standout performances Gillen had in mind. A common adjective intertwined them all.

Senior middle hitter Maddie Lipetzky, an all-state performer with Ifill in 2020, spearheaded Shakopee’s block and led the Sabers’ offense with 11 kills. Senior setter Katie Cordes was next on the team with six.

For now, Eagan can enjoy a conference title that will be an outright distinction with either a win Monday at Apple Valley (0-7) or a Prior Lake (7-1) loss Tuesday vs. Lakeville North (4-4).

“It means the world to us,” Ifill said. “Honestly, it’s so exciting to have this. With so many seniors, this is our last season, so it means a lot to go out as conference champs.” 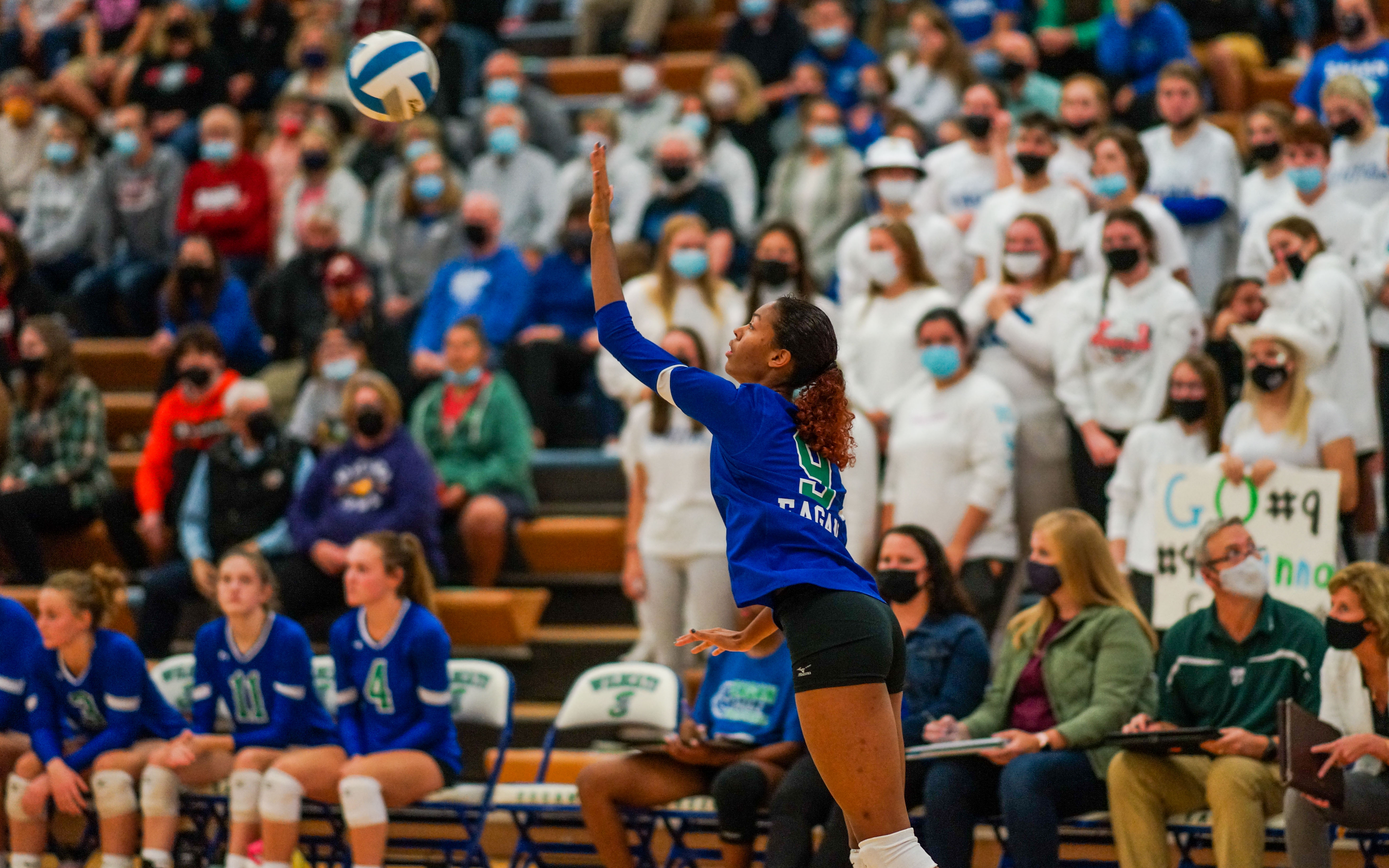 With a win against a fellow state heavyweight, Eagan clinched at least a share of the South Suburban Conference title with a home sweep against Shakopee.

In the first set, the Wildcats fell behind 7-4 before mounting a 12-2 run. Shakopee was held without a kill until senior setter Kate Cordes cut the Sabers’ deficit to 19-10.

The Wildcats spread the ball around well and had seven different players record a kill in a 25-12 second set win. Senior rightside hitter Sienna Ifill led Eagan with 12 kills in the match.

Shakopee led 13-11 in the third with senior middle blocker Maddie Lipetzky doing damage. Five of her team-high 11 kills came in the set. Eagan responded with a 6-0 run to put the set and match out of reach with a 25-19 closing score.

Eagan can win the conference outright with a win Monday at Apple Valley (0-7) or a Prior Lake (7-1) loss Tuesday vs. Lakeville North (4-4). 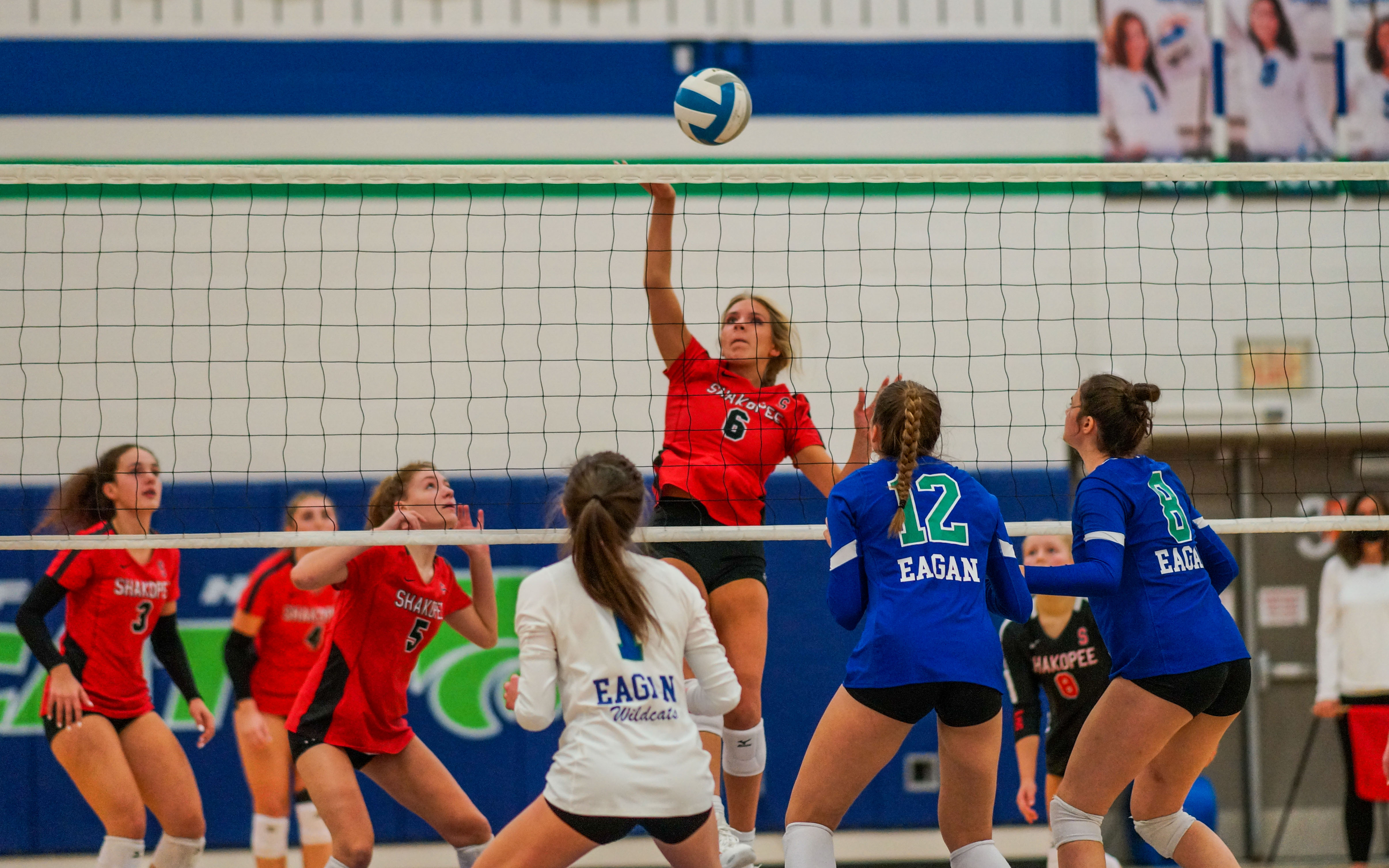