The Rebels generated quick chemistry this season and used that to beat the Bengals in straight sets on Wednesday. 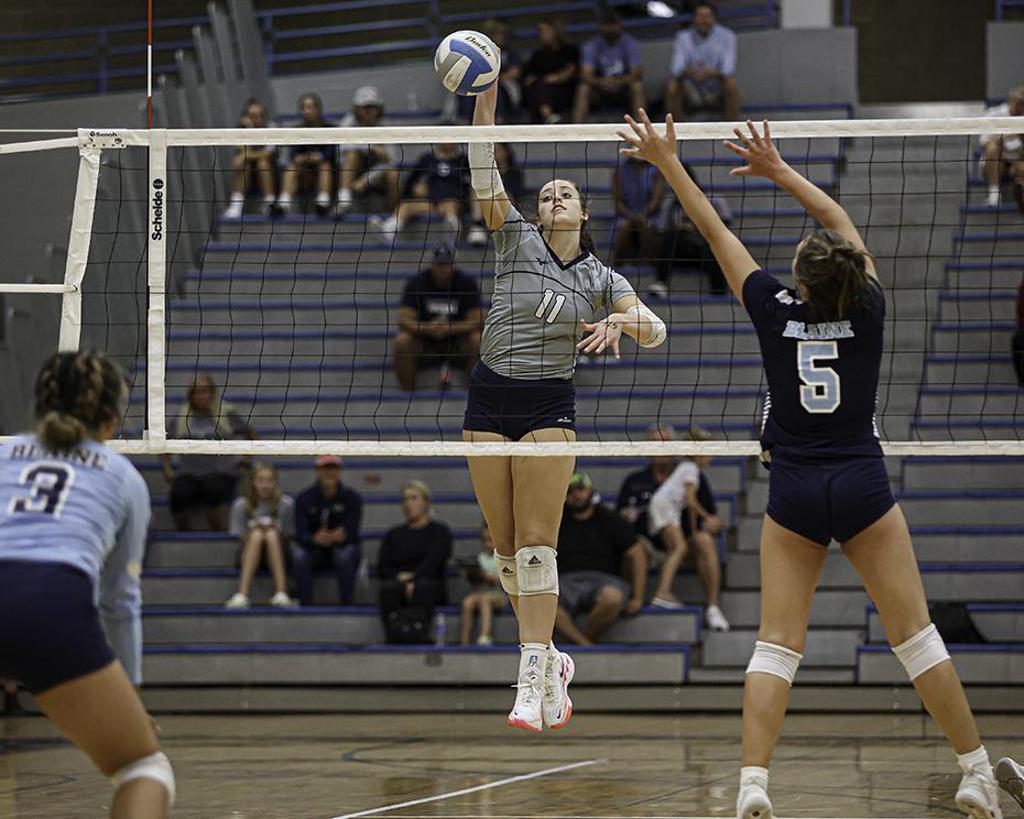 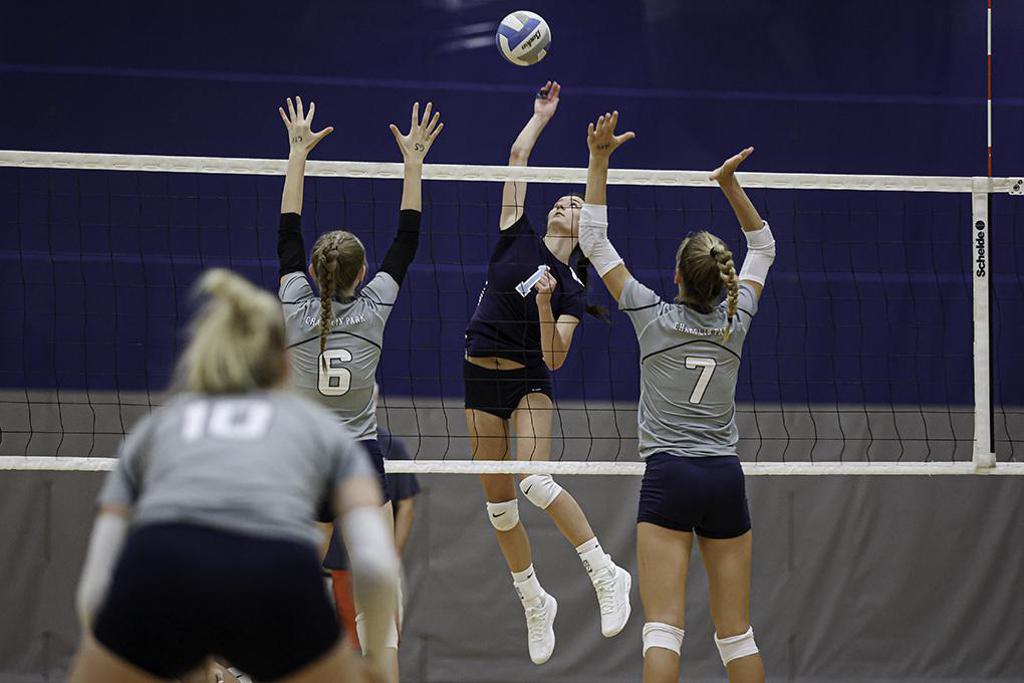 Champlin Park senior middle blocker Claire Caswell didn't know a lot about a few of her newest teammates before the 2021 volleyball season got underway. But it didn't take long for freshmen Reese Axness and Carly Gilk and sophomore Lily Riese to make a favorable impression.

And now the young group is leaving its mark on the Minnesota high school volleyball community. After Wednesday's 25-19, 25-18, 25-17 victory over Northwest Suburban Conference rival Blaine, the Rebels are 10-1 overall and have climbed to third in the Class 4A coaches poll from Sept. 12 after being left out of the preseason poll.

Axness entered Wednesday's game second on the team in assists (147), just one behind senior Allie Kopp. Gilk started Wednesday as the Rebels' leader in kills (88) and second in blocks (13). Riese, with six blocks before adding a few more Wednesday, already gives coach John Yunker a steady presence in the middle and a solid player to complement Caswell, who came up with a number of run-stopping plays in the victory over Blaine (4-1, 2-1). 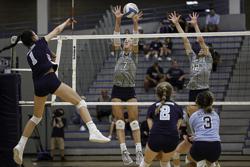 It was the Rebels' play at the net that stymied Blaine's upset hopes on Wednesday. Statistics weren't immediately available, but the Rebels dominated at the net, blocking or slowing many of the Bengals' kill attempts. Senior Natalie Schmitz and junior Clara Brown each managed nine kills to lead Blaine. Brown added three blocks.

"We had a couple of big blocks that definitely were run-stoppers," said Yunker, who guided Champlin Park to a Class 3A state championship in 2018.

Riese was instrumental in that effort. Her blocks stopped three Blaine runs in the first two sets. Her successful kill attempt in the third set gave Champlin Park a 20-12 lead and pretty much sealed the Rebels' victory.

"We work a lot on our blocking," Yunker said. "We play in a conference with a lot of powerful hitters and play a lot of non-conference games against powerful hitters. If we can slow down those balls, we make things easier for our back row."

Caswell had a big game against Blaine. She doesn't have the size of younger teammates such as Axness, Gilk and Riese, so she has to use excellent footwork and anticipation to compensate. She had two run-stopping kills and a game-ending block in the third set on Wednesday.

The game was the eighth in seven days for Champlin Park, which lost only one to No. 1-3A Marshall on Saturday at the Southwest Minnesota Challenge.

Blaine faced its toughest test of the season without the same amount of seasoning as the Rebels. Thienes is in her second season as the Bengals' head coach and didn't have a hand in scheduling during the pandemic-affected season of 2020.

Blaine had lost just one set in four matches before Wednesday's loss.

Thienes said she would have scheduled differently, in hindsight, adding tougher non-conference opponents and trying to enter tournaments earlier in the season.

"This was the first high-level opponent we've faced and they have a lot of different options," Thienes said. "And we just came out flat. We had moments of excitement but nothing that could carry us through a set." 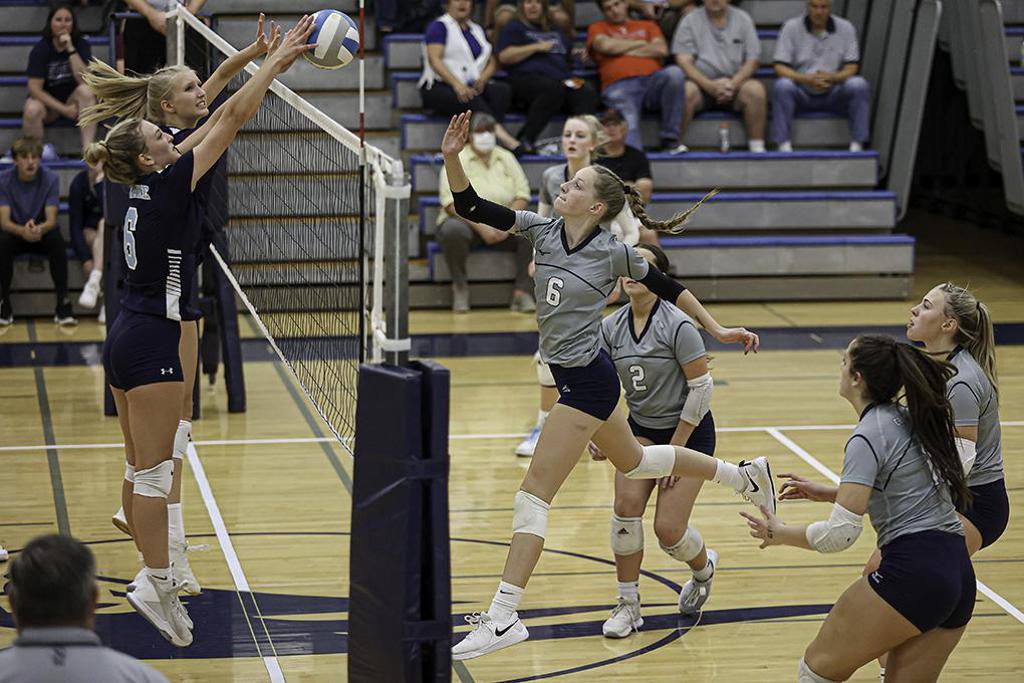 Champlin Park coach John Yunker finally can take a breath. His team's 3-0 victory over visiting Blaine on Wednesday night capped an eight-game stretch over just seven days. Yunker is looking forward to having a couple of practices before the Rebels get back to the 2021 season on Sept. 20 against Northwest Suburban Conference rival Maple Grove.

The Rebels, who have climbed to No. 3 in the latest Class 4A coaches poll after starting outside of the preseason top 10, are now 10-1, 2-0. Wednesday's victory was Champlin Park's third in a row after a loss to No. 1-3A Marshall in last weekend's Southwest Minnesota Challenge.