Anna Molstad's 20 kills led the Trojans to victory over the injury-riddled Jaguars. 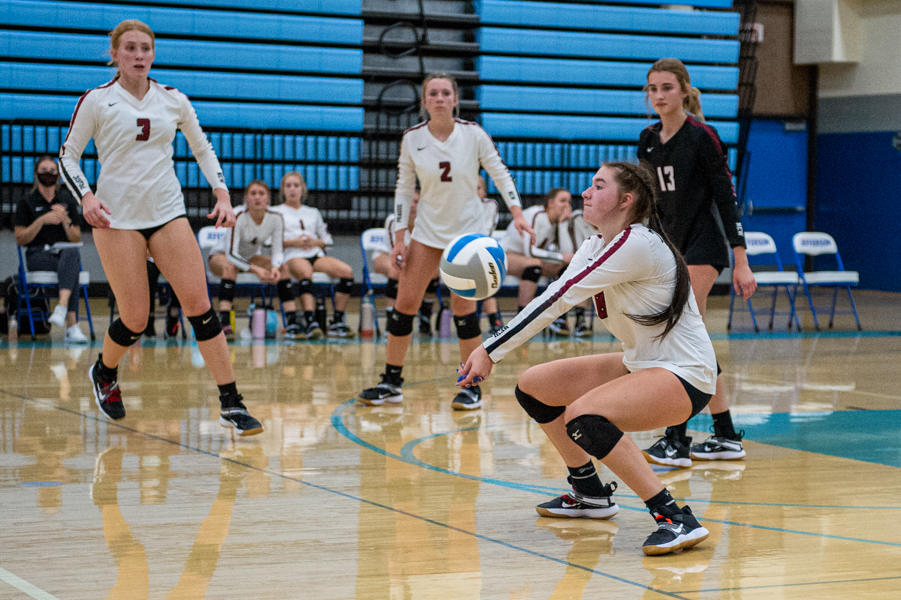 New Prague hasn't just joined the Metro West Conference in 2021. It's looking to disrupt it.

In a battle of early season conference unbeatens, newcomer New Prague came away with a 21-25, 25-18, 25-15, 25-18 victory in volleyball Tuesday at Bloomington Jefferson.

Both were 2-0 in Metro West play entering the night.

"They were definitely one of the top schools that we're going to be playing," said senior outside hitter Anna Molstad, who had a match-high 20 kills. "And winning really puts us in a higher position for the conference." 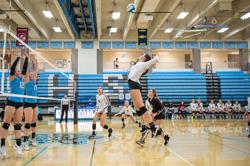 The Jaguars entered the night ranked No. 4 in the Sept. 12 Class 4A coaches' poll, but they were shorthanded.

Early in the second set, Bloomington Jefferson lost Ellie, a Class 4A All-State honorable mention in 2020, to an ankle injury after coming in contact with the left post while making a play on the ball.

The wind came out of the sails for the Jaguars, who dropped five of the next six points. They battled back to cut the deficit to 16-14 thanks to a kill and two straight aces by Melanie Meyer. New Prague responded to take the rest of the set comfortably.

Even without one Sieling, the other, right side hitter/outside hitter Cassie, was an All-State performer in 2020. New Prague head coach Greg Sayuk knew the job wasn't done yet.

"I knew that they had a number of really effective hitters," Sayuk said. "We were just going to do the best job we could to put ourselves in a position to pop some balls up, block some balls and grind out points however we needed to."

New Prague led wire to wire in the third set.

Bloomington Jefferson (6-3) came out with more emotion in the fourth set. Neither side led in the fourth set by more than two points until the Trojans mustered a 17-14 advantage and took control from there.

"I think we came into it expecting the Sielings to be a big part of it," Molstad said. "We started shutting them down. Obviously the injury wasn't good for them, but they definitely still played hard and we came back harder, knew what they were going to do and counteracted it."

Bloomington Jefferson is looking to make it back to state for the first time since 1999. The Jaguars took on their fifth ranked opponent of the season, dropping to 2-3 in these matchups. They boast a 3-2 early season win over perennial power No. 5-4A Eagan.

This was New Prague's (7-2) second matchup against a ranked opponent, having lost a 2-0 tournament match Sept. 11 to No. 2-3A Stewartville. Its other loss came to a Class 4A foe, St. Michael-Albertville.

The Trojans face each Metro West foe once. They'll get a crack at No. 5-4A Chaska on Sept. 28. New Prague comes from the Wright County Conference and joined the Metro West (along with Orono and Waconia) for the 2021-22 season.

Conference supremacy is a goal, but it’s far from the only one. Qualifying for the state tournament for the second time in history on the 20-year anniversary of a Class 2A runner-up finish is also in the Trojans' sights.

A 72-31 record in the last four seasons under previous head coach Angie Anderson set the table for Sayuk. He won a Class A state title in 2013 with Southwest Christian and was an assistant on the 2020 New Prague staff.

"Personally, I haven't approached it as a coach any differently because we have bigger goals than conference stuff," Sayuk said of the conference transition. "Every week we prepare ourselves for a playoff run and conference is part of the process. Just try to get better every time we step in the gym and put ourselves in a position to be successful." 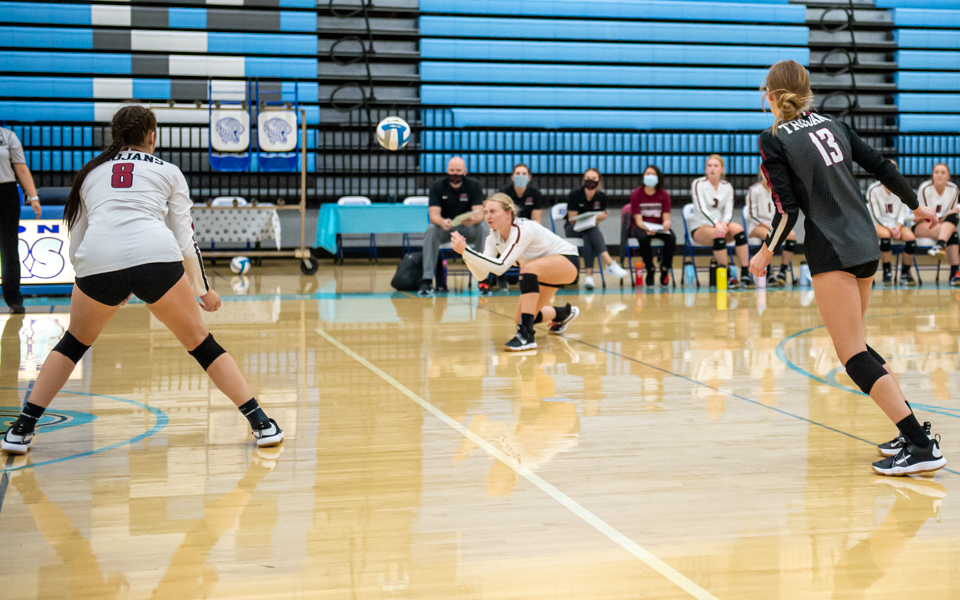 The Trojans’ Abby Molstad gets a dig in the first set Tuesday night in the Trojans' 3-1 win over the Jaguars. Photo by Earl J. Ebensteiner SportsEngine

Bloomington Jefferson, ranked No. 4 in the Sept. 12 Class 4A coaches' poll, jumped out to a 3-0 first-set lead. New Prague, ranked No. 3 in Class 3A, countered to take five of the next six points, but that was the Trojans' only lead in the set.

With New Prague ahead 4-3 in the second set, the Jaguars' kills leader, senior outside hitter Ellie Sieling, departed the match with an ankle injury. The Concordia (St. Paul) commit did not return to the match.

The Trojans (7-2, 3-0) grabbed nine of the next 12 points before the Jaguars regrouped. A 6-0 Bloomington Jefferson run tied the set at 16 before New Prague closed on a 9-2 run.

It was all New Prague in the third set as senior outside hitter Anna Molstad and company continued to shine. She led the match with 20 kills.

Bloomington Jefferson played with more emotion in the fourth set. The Jaguars led three different times and were tied as late as 13 points before the Trojans pulled away. 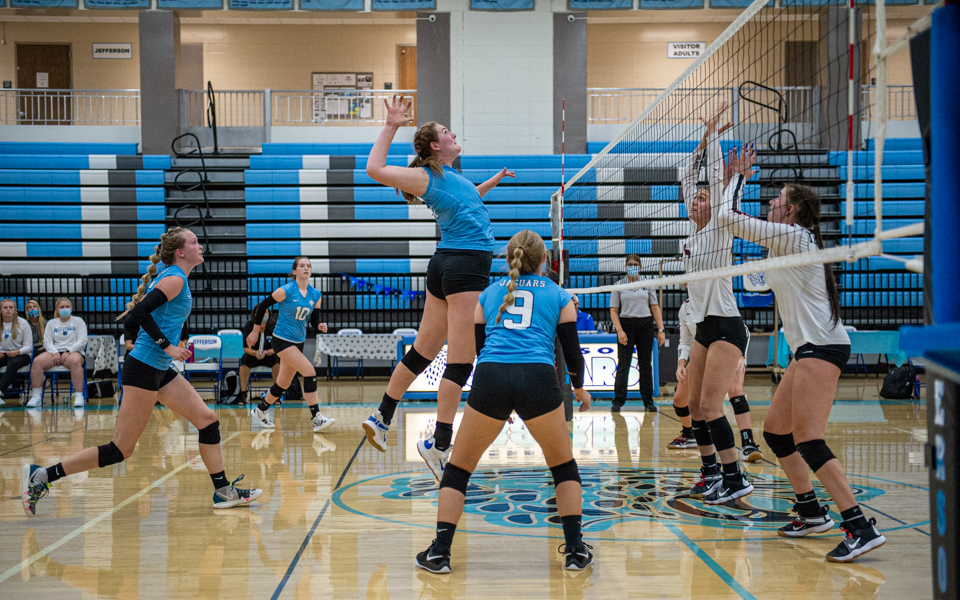 The Jaguars’ Eleanor Erickson goes for the kill shot Tuesday night at home in the Jaguars 3-1 loss to the Trojans. Photo by Earl J. Ebensteiner, SportsEngine