The Raptors were one point away from losing the first set, but came back and held on in the next two over the Lakers to win the match. 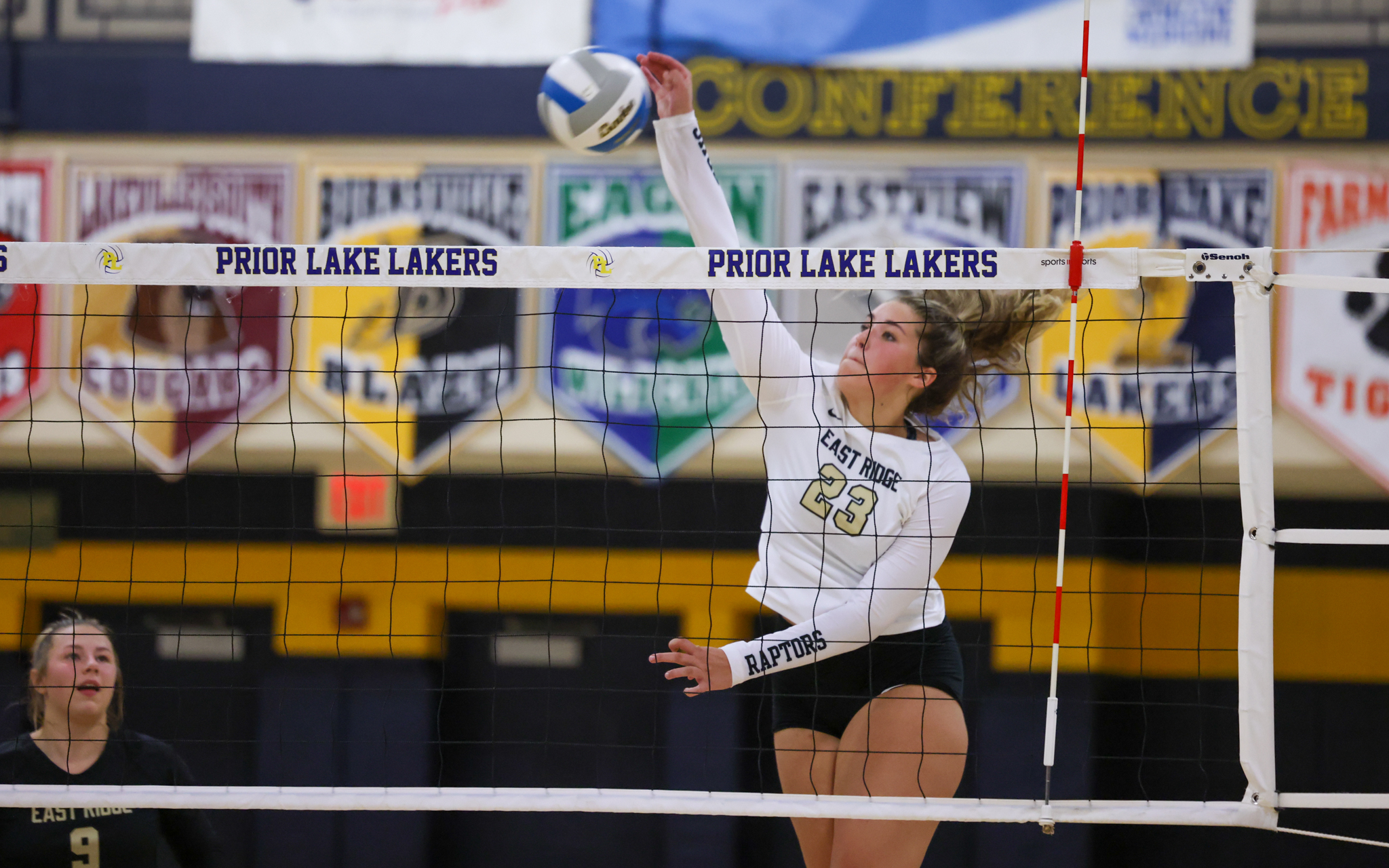 East Ridge senior Britt Carlson (23) had 17 kills against Prior Lake Friday night. The Raptors defeated the Lakers in straight sets at Prior Lake High School. Photo by Jeff Lawler, SportsEngine

As East Ridge took the floor for its opening match of the season on Friday, there was a new face in the middle of the floor at setter. However, her last name is certainly one that those in the East Ridge program are familiar with.

Friday was Raptors’ setter Macey Spolidoro’s first as the team’s starting setter. Filling the shoes left by her older sisters, Spolidoro and her team got off to a roaring start, defeating Prior Lake 27-25, 25-17, 25-23.

Prior to Macey taking on the role as setter for East Ridge (1-0, 0-0), she sat on the bench and watched her sister, Audrey, run the Raptor offense. That included a shortened 2020 season where East Ridge went a perfect 9-0 in the Suburban East Conference and failed to lose a set the entire season.

“It was really cool to watch her,” Macey said of her older sister. “I admire her so much playing.” 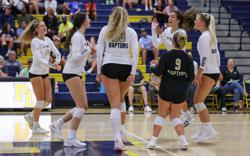 Since the abrupt ending to the 2020 season, Audrey has graduated and now plays at St. Benedict's. This opened the door for Macey to fill the role her sister previously held. She’s the third Spolidoro to play for East Ridge. The oldest Spolidoro is Lindsey, who graduated in 2018.

Before Friday’s match, Audrey and Macey spoke to each other about getting ready for the youngest Spolidoro’s first match.

“[Audrey] has been there to give me tips,” Macey said. “We talked about staying calm, working through the nerves and focusing on my team.”

Spolidoro’s first match was a big one as East Ridge, ranked No. 3 in the preseason Class 4A coaches’ poll, took on No. 10-4A Prior Lake on the road. Things started well for the Raptors as they jumped ahead 16-10 in the inaugural set of the season.

However, things started trending in the wrong direction as the Lakers (0-1, 0-0) pulled ahead thanks to their leading hitter, senior Julia Hanson. The Minnesota commit finished with a match-high 20 kills and is coming off a 2020 season where she was first team All-State in Class 3A.

“[Hanson] jumps so well,” said East Ridge coach Steve Anderson. “She hits hard, smart. She can hit any shot. We knew they were going to set her. Even though we knew that, she still did a really good job out there.”

The lead eventually grew to 24-20 for Prior Lake. With the Lakers one point away from handing East Ridge its first set loss since 2019. But the Raptors started clawing back. They eventually tied the match up at 24. The momentum continued to trend toward East Ridge and the team eventually captured the set, 27-25.

“I told the girls I was really proud of them for winning that set,” Anderson said. “We kept clawing back. We served really tough and defended well and came back.”

From there, the Raptors kept on rolling. Spolidoro kept her hitters happy and finished the match with 30 assists in three sets. Her top passing target was senior outside hitter Britt Carlson. She finished with a team-high 17 kills. Fellow senior Camryn Greenwald also contributed along the way with 11 kills.

“[Spolidoro] stabilizes things for us,” Anderson said. “She makes the right decisions. I was very impressed with her tonight.”

Friday’s match was a resumption of a nonconference rivalry that was put on hold during the COVID-19 pandemic as East Ridge only played matches inside the Suburban East Conference. The Raptors will get their shot at other nonconference opportunities in 2021 with Spolidoro expected to be a leader in the middle.

“We’re excited to have two more years with her,” Anderson said. 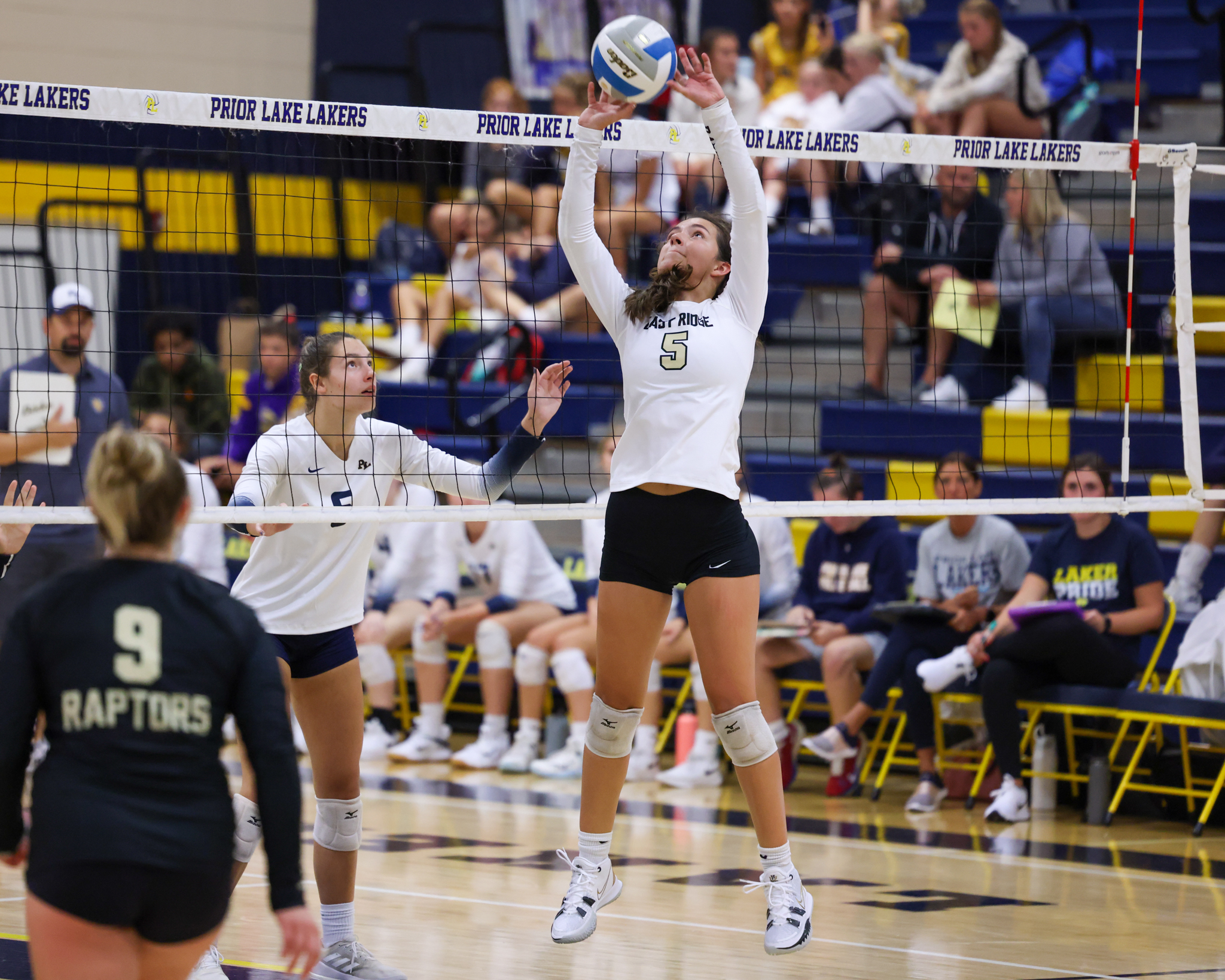 East Ridge’s Macey Spolidoro (5) sets one of her 30 assists against Prior Lake Friday night. The Raptors opened their season with a straight sets victory over the Lakers at Prior Lake High School. Photo by Jeff Lawler, SportsEngine

East Ridge stormed back to win its opening set of the season on Friday after being one point from losing it, trailing 24-20 in the first set. The Raptors never looked back as they took down Prior Lake 27-25, 25-17, 25-23 at Prior Lake High School in both teams’ season openers.

After the Raptors (1-0, 0-0) led 16-10 in the first set, East Ridge saw its early lead disappear — and then some. Prior Lake not only gained the lead, but the Lakers (0-1, 0-0) were on the verge of grabbing the first set, leading 24-20. Prior Lake senior outside hitter Julia Hanson was the driver behind the strong opening set as she had a team-best eight kills.

That lead turned out to be temporary as the Raptors, ranked No. 3 in the Class 4A preseason coaches’ poll, evened things up at 24 before eventually winning the first set, 27-25. Senior outside hitter Britt Carlson helped the comeback effort with a team-best six kills in the set and 17 kills in the match.

The No. 10-4A Lakers never recovered from dropping the first set despite a match-high 20 kills for Hanson, a University of Minnesota commit. Sophomore Ella Joesting was the team’s top passer with 11 assists.

On the other side, East Ridge sophomore setter Macey Spolidoro kept the Raptor offense moving and finished with 30 assists. Hitting alongside Carlson, senior middle blocker Camryn Greenwald finished with 11 kills along with a pair of blocks. 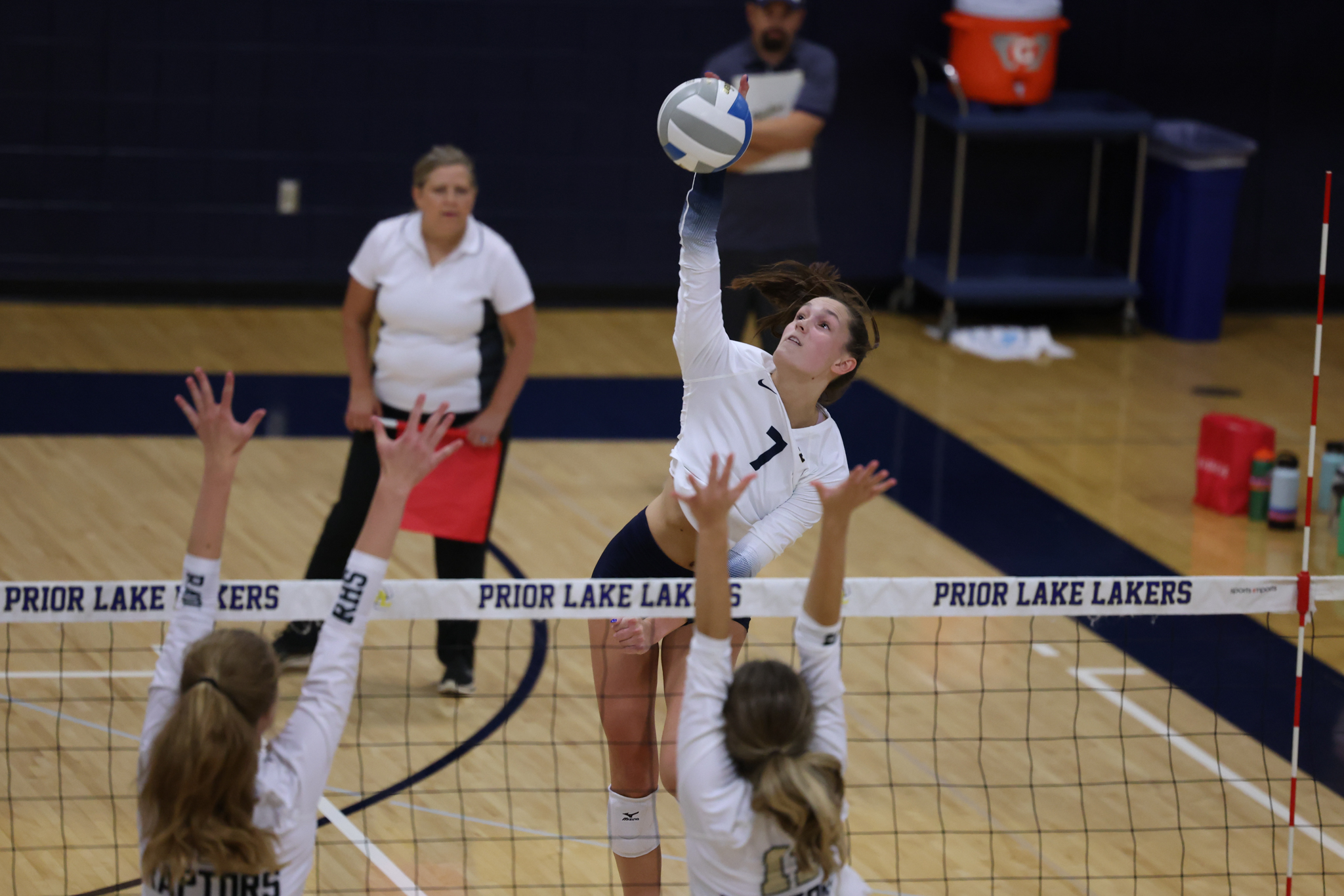 Prior Lake’s Julia Hanson (7) goes up for one of her game-high 20 kills against East Ridge Friday night. The Lakers fell to the Raptors in straight sets. Photo by Jeff Lawler, SportsEngine