Already elite from the front row, the 6-4 Eastview senior, who will play for the Gophers next year, became a more complete player and rallying force as a team leader. 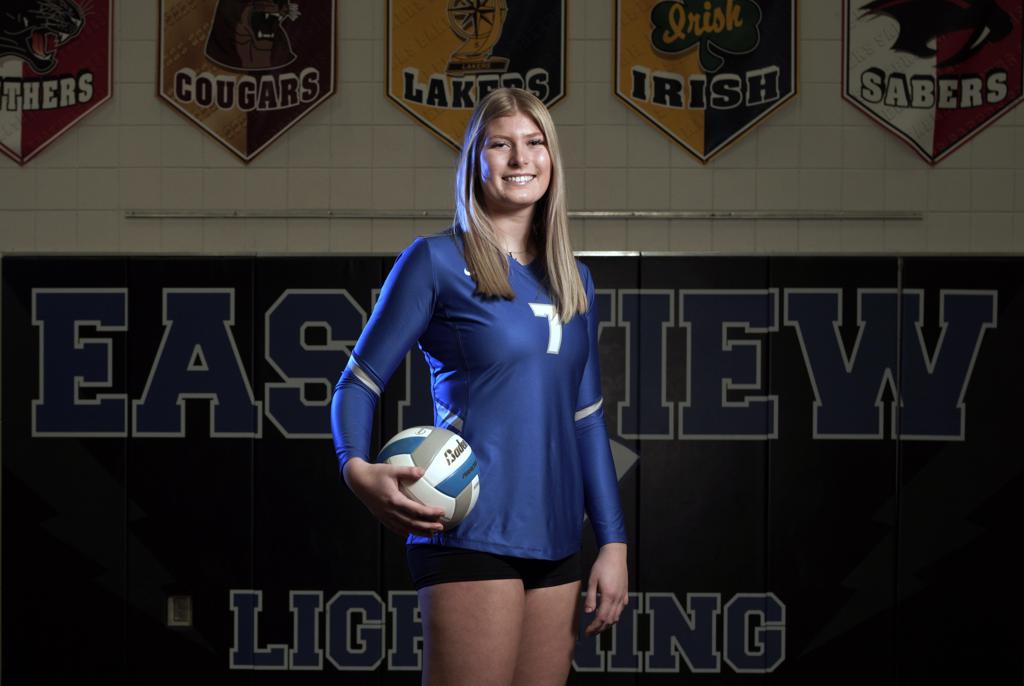 “Her court presence was felt 100 percent of the time with her domination on the front and back row,” coach Becky Egan said. “Lauren was a leader on the team for both attacking and defending, proving to be a huge threat no matter where she is on the court.”

Despite standing 6-4 and built for front-row dominance, Lauren Crowl admittedly wasn’t satisfied where she was as a volleyball player. She wanted more, like to be known as a player who never leaves the court.

She wanted six rotations and to do that, she’d have to develop a skill set — defense and serve receive — that was more hard labor and less high profile.

“In my freshman and sophomore year, I would step out for serve receive. I didn’t like sitting on the bench,” the Eastview senior said. “In my junior year, I stepped it up a lot more. This year, I was in for all [serve receiving] and passing.”

Crowl’s dedication to becoming an all-around talent made her the Star Tribune’s 2020 Metro Volleyball Player of the Year.

The volleyball ranks are full of dominant and deserving hitters. Being willing and able to do the dirty work, while not diminishing aspects of her game that elevate her to elite status, make her stand out.

“I would have expected her to be a team leader in kills and blocks,” first-year Eastview coach Becky Egan said. “To be one of our leaders in serves received and digs on the back row? I would not have expected that.”

Teammates noticed. If their best player was willing to sacrifice, they might as well do it, too. Crowl was their heart, soul and unquestioned leader.

Her versatility and do-it-all mindset showed up in Crowl’s stats. She finished with 191 kills, despite breaking in a freshman setter, and 33 blocks. But it was her defensive traits that jumped out, with a whopping 239 digs in an abbreviated season and gaudy serve-receive efficiency percentage of .923.

“Her court presence was felt 100 percent of the time with her domination on the front and back row,” Egan said. “Lauren was a leader on the team for both attacking and defending, proving to be a huge threat no matter where she is on the court.”

For Crowl, becoming the player she desired to be — one who is expected to have a lengthy presence in the middle at the University of Minnesota — was an endurance test. Serve receive was always a portion of the game she “had to do,’’ she said. “I was never that fond of it, but I learned to like it.”

The extra work began during summer workouts with her club team, Northern Lights. She became not only a more complete player, but a smarter one, too. She began to see the game as a whole, not just her part of it.

“The best part? My volleyball IQ,” she said. “I see the game better. It pays off with my hitting because I can see around block, see where my opportunities are.”

As for Crowl’s leadership, Egan told a story that sums up what Crowl meant to her team.

“Weve got a real rivalry with Rosemount and we beat them the first time we played them. We were at their place and I told Lauren, ‘They’re gunning for you,’ ” Egan recalled. “Lauren pulled the girls together, looked every single one in eye and said ‘Let’s go.’ You could feel her intensity on the bench.”

The Lightning battled, playing perhaps their gutsiest match of the season, and pulled out an 18-16 victory in the fifth and deciding set. Crowl led the team in kills, digs and motivational exhortations, almost willing her team to victory.

“That was memorable,” she said. “That match was a back and forth roller coaster and when we get in tight games, we tend to freak out. I just kept telling everyone in the huddle that nothing matters except the next point and we had to trust each other.”

“She elevated everyone’s game,” Egan said. “She was our leader.”

That Crowl became her team’s shepherd stems from her first varsity experience as an eighth-grader. It may have been five years ago, but she never forgot.

“I really looked up to the older girls and they took me under their wings,” she said. “They’re still some of my best friends. I want to be the person these younger girls look up to.”