Abbey Milner's 15 kills powered the Panthers past the Wildcats, giving her team at least a share of this year's South Suburban Conference title. 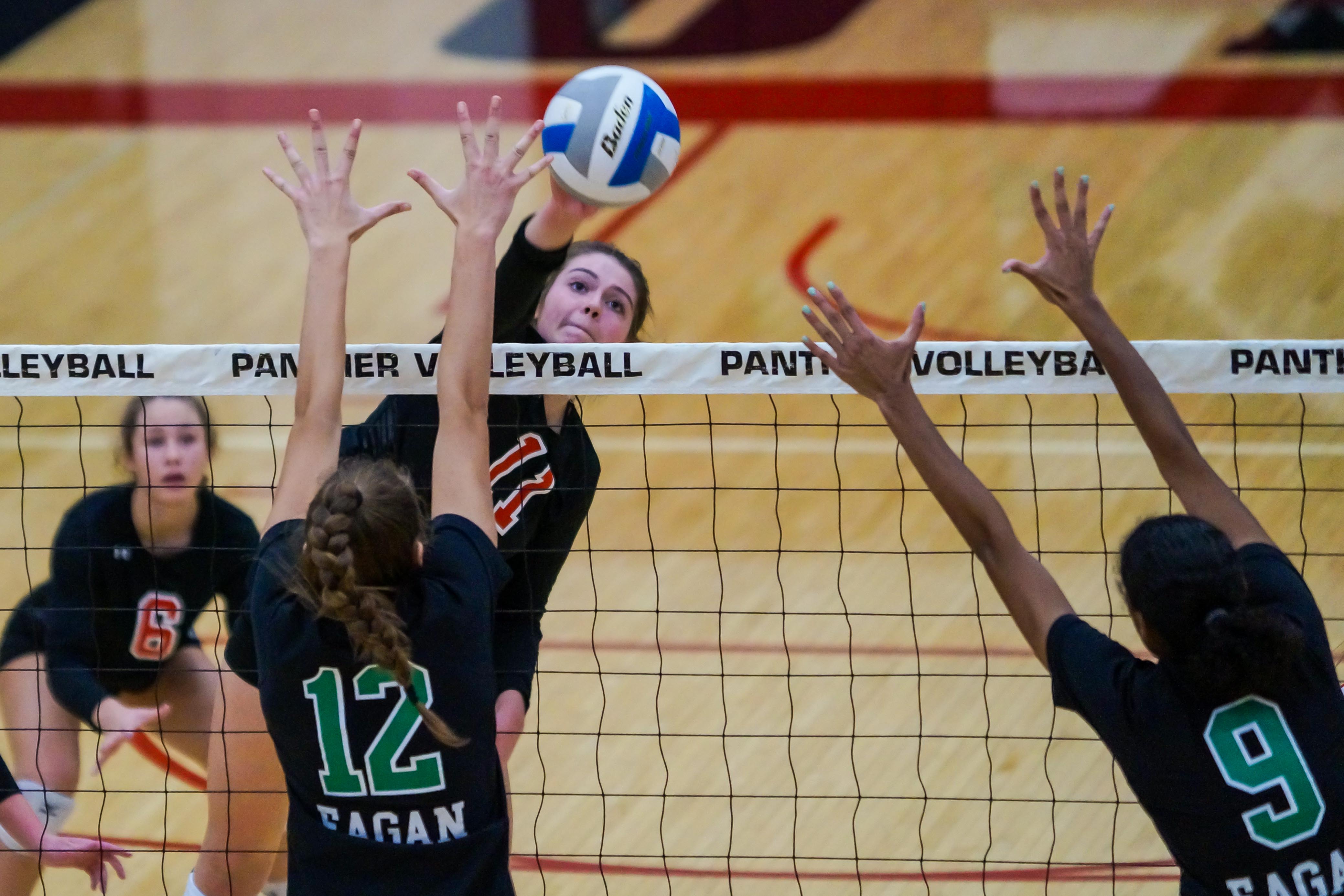 Lakeville senior Abbey Milner (11) with a spike attempt Thursday against Eagan. Milner had 15 kills, helping the Panthers to victory in their season finale. Photo by Korey McDermott, SportsEngine 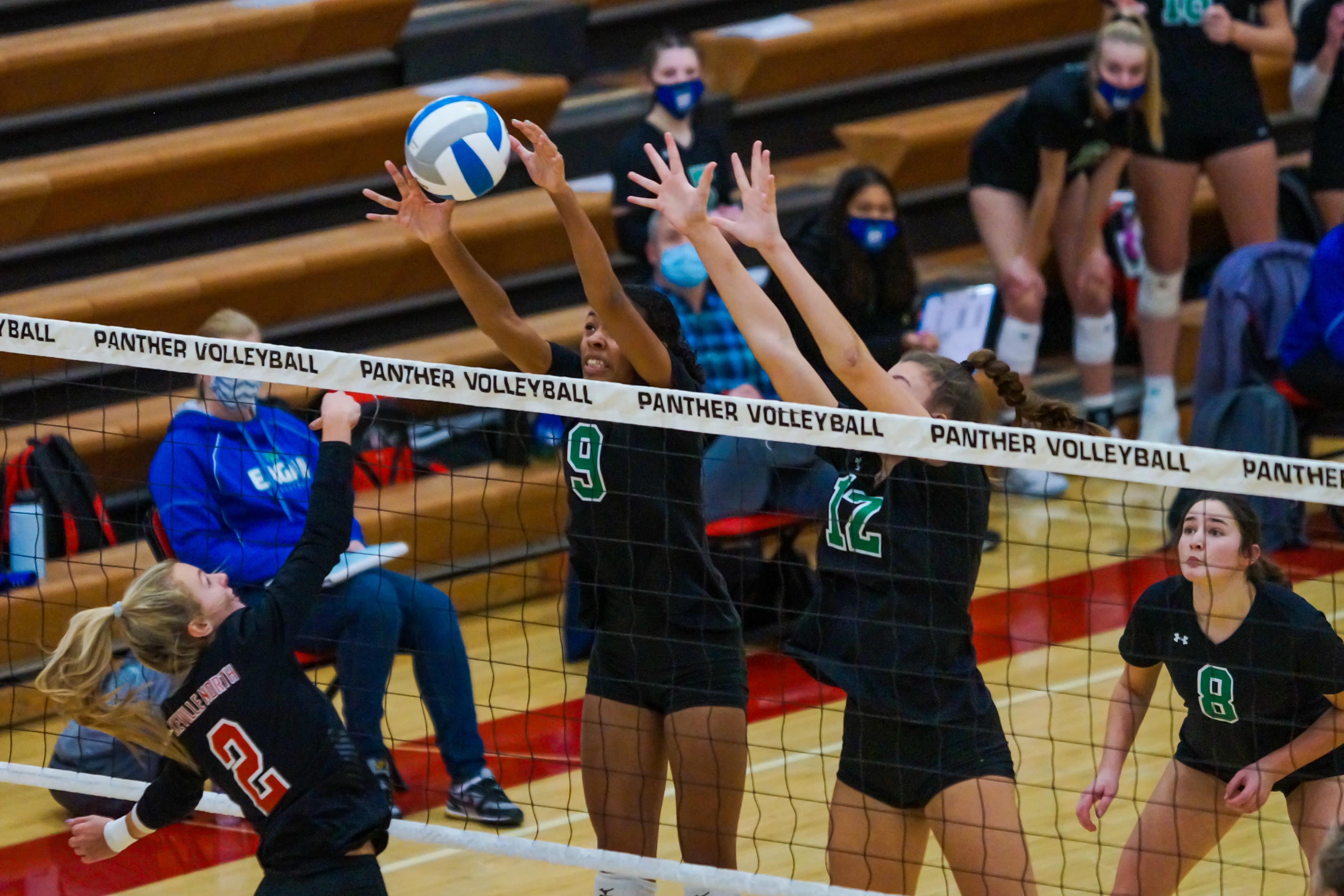 Eagan's Sienna Ifill (9) with a block on Lakeville North's Maddy Hornyak (2) during their match Nov. 19. Ifil had 12 kills in the Wildcats' 3-0 loss to Lakeville North on Thursday. Photo by Korey McDermott, SportsEngine

At their last game of this pandemic-shortened season, there was a sign in the Lakeville North gym that read: “Last one, best one, we found a way.”

With an answer for every Eagan attack, the Panthers, ranked no. 4 in Class 3A coaches’ poll, swept the Wildcats 25-21, 25-18 and 25-23 on Thursday night at Lakeville North High School. With the win, the Panthers (10-2) guaranteed themselves at least a share of this year’s South Suburban Conference title.

“These girls have taken advantage of every game as a gift,” said Lakeville North coach Jackie Richter. “I just reminded them to be aware of Eagan’s tendencies, and they went out and played their game.”

By the time Eagan (8-2) took a timeout in the first set, senior middle hitter Abbey Milner already had four kills. 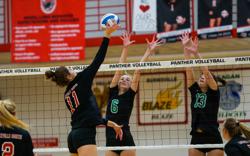 “We went out like it was our last game and executed really well,” said Milner, who will play at Creighton University next year. She had a memorable third set Thursday with back-to-back service aces and a kill so powerful it bounced onto the walking track above the gym. She ended the match with 15 kills.

Eagan junior outside hitter Sienna Ifill showed impressive versatility with powerful and soft kills alike landing in the Lakeville North zone, including one that tied the score at 21 apiece in the third set. She led the No. 2-3A Wildcats, who began their season on Oct. 9 by beating the Panthers 3-1 at home, with 12 kills Thursday.

How does one handle a season that initially wasn’t supposed to start until the spring in a quasi fourth season, only to have it reinstated for the fall, and then suddenly be cut short by about three weeks without a postseason?

“It was definitely up and down, but we’re lucky to have great coaches and a strong support system,” said Milner.

Richter is in her seventh season with the Panthers and was named Class 3A state coach of the year in 2017 after leading her team to the state title.

“This season I found out how much I could really give every day,” said Hornyak, who will play for the University of North Dakota next year.

Eagan wraps its season Friday with a matchup against South Suburban foe Shakopee, which is ranked No. 3 in Class 3A.

“The girls have been great all season,” said Eagan coach Kathy Gillen. “But there have been so many starts and stops that I’m practically numb at this point.”

In addition to playing Lakeville North on Thursday, and having a match Friday, the Wildcats beat Eastview in four sets on the road Wednesday. Three games in three days?

Thursday’s tilt in Lakeville could have been the scene at any high school around the state with Saturday’s prep sports shutdown looming: student-athletes giving it their all for one last rally, while Imagine Dragons’ “Whatever It Takes” plays between sets.

And what is the Panthers coach planning to do now that this crazy season is ending?

“I’m going to take a deep breath and have a family weekend,” Richter said.

With an answer for every Eagan attack, Lakeville North finished its pandemic-shortened 2020 season on Thursday night with a 25-21, 25-18, 25-23 sweep of South Suburban Conference rival Eagan at Lakeville North High School.

The Panthers (10-2) never trailed and stayed ahead until the Wildcats (8-2) tied it at 21 apiece in the third set. Lakeville North, ranked No. 4 in the Class 3A coaches’ poll, was fueled by senior middle hitter Abbey Milner who had 15 kills. Senior outside hitter Maddy Hornyak added eight kills.

Eagan, which began its season on Oct. 9 with a 3-1 defeat of Lakeville North at home, was led by junior outside hitter Sienna Ifill’s 12 kills.

The No. 2-3A Wildcats finish their season tomorrow with a match against No. 3-3A Shakopee. The Panthers, meanwhile, guaranteed themselves at least a share of this year’s South Suburban title by beating Eagan. 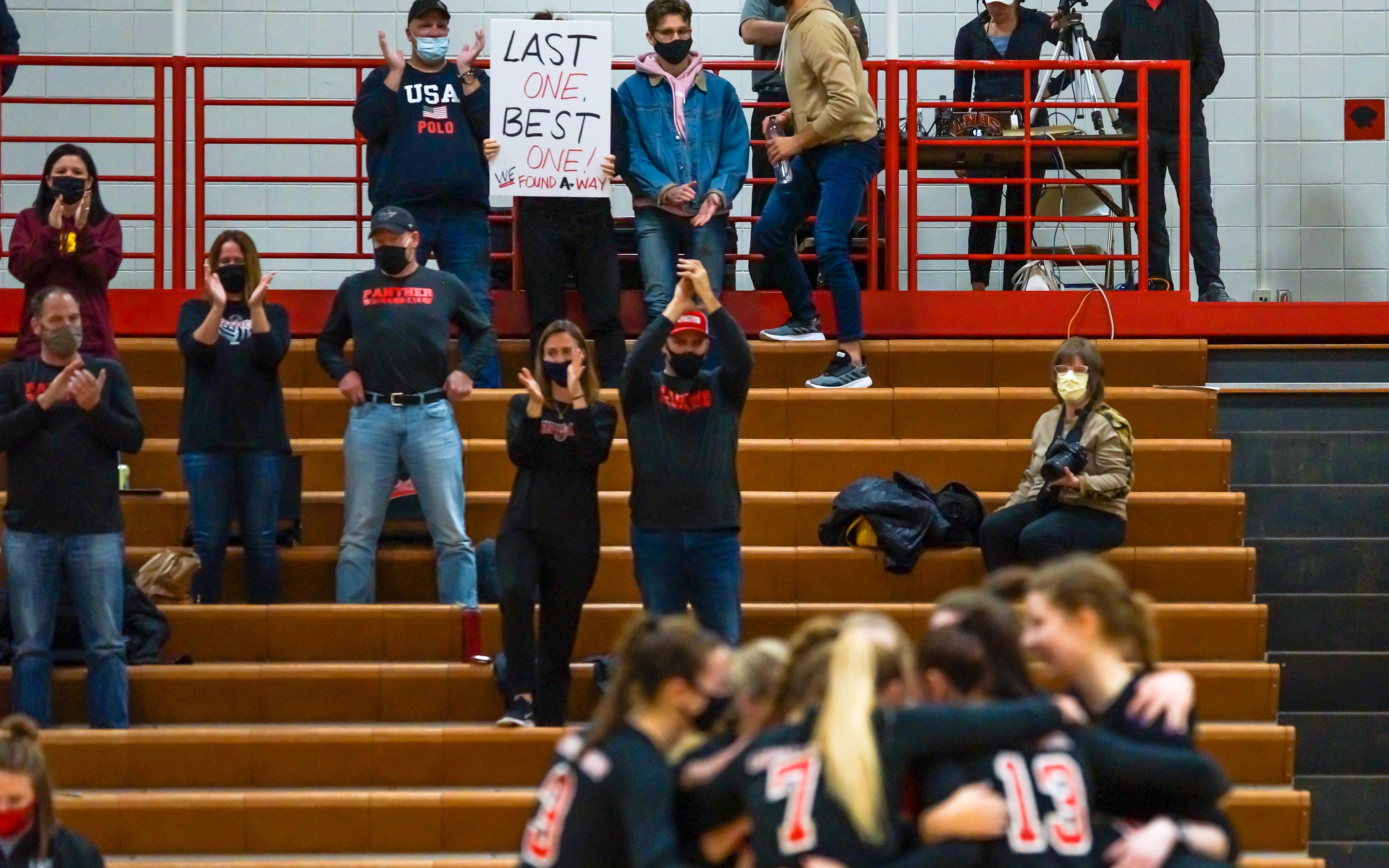 With the Governor Walz's decision to suspend all youth and high school sports Wednesday, Lakeville North parents show their appreciation for the season the Panthers were able to have. Photo by Korey McDermott, SportsEngine