Chaska sinks its talons into St. Louis Park to win in straight sets

The Hawks have won six of seven matches this season. All of their triumphs have come with 3-0 scoring outcomes. 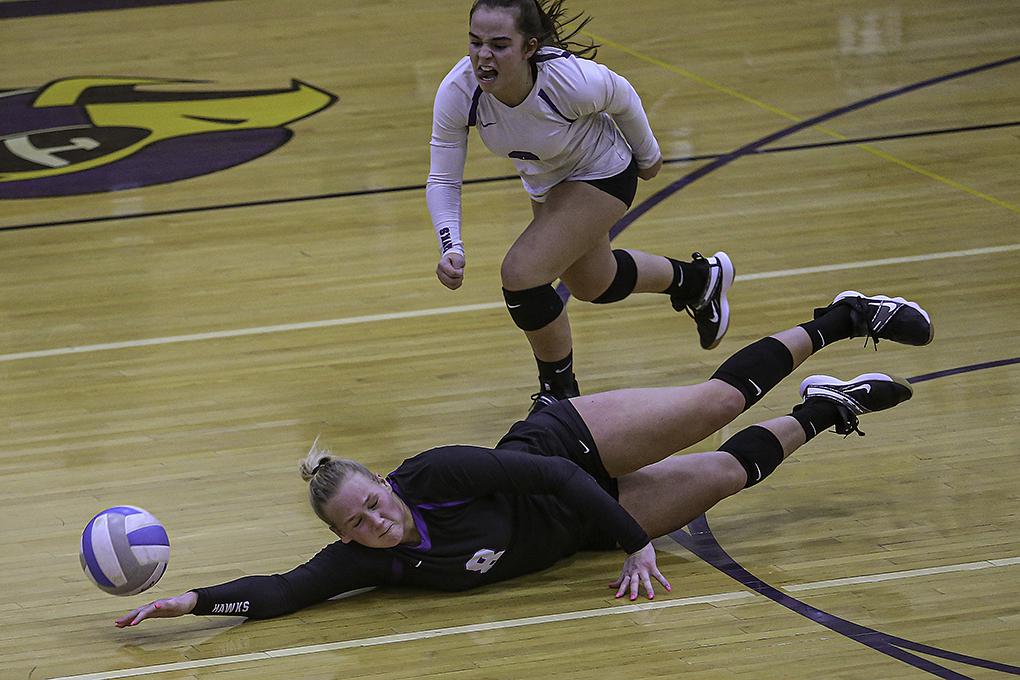 Chaska's Brier Ziemer couldn't get enough of a hand on the ball to keep it in play during the Hawks' 3-0 victory over St. Louis Park. Photo by Mark Hvidsten, SportsEngine 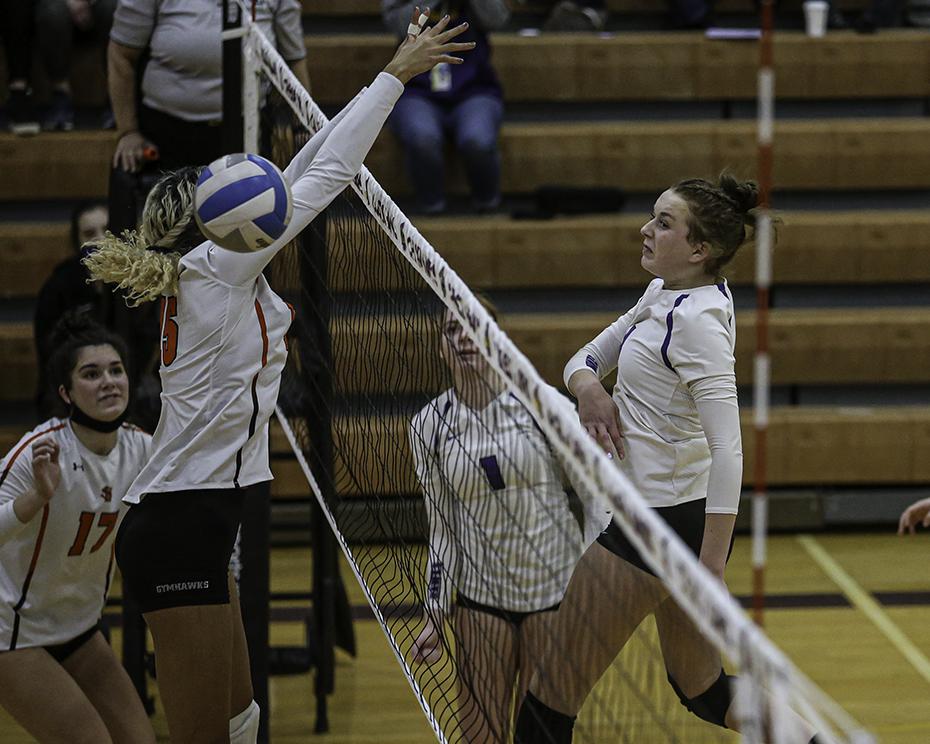 Playing past the third set remains uncharted territory for Chaska this season.

One outcome was a loss last week at the hands of St. Michael-Albertville, ranked No. 8 in the Class 3A coaches’ poll, but it has otherwise been smooth soaring for the Hawks, as they’ve won all other matches they’ve played in straight sets this fall.

“We’re working on attitude,” said Chaska coach Sue Murphy. “Since we lost to STMA 0-3, we came back to our house and said ‘that’s how we’re going to dominate from now on.’”

The Hawks barely finished above .500 in 2019 at 17-14 but went 6-0 in conference play to claim their second Metro West title since the conference was established in 2014. They also surged late in the season, nearly making the state tournament before a 3-2 loss to Minnetonka in the section finals.

There’s no state tournament scheduled this year due to COVID-19 restrictions. But the No. 10-3A Hawks can take some solace in Thursday’s win over a 2019 state tourney squad. This fall, St. Louis Park returned much of its roster from a team that went 25-8 a year ago. 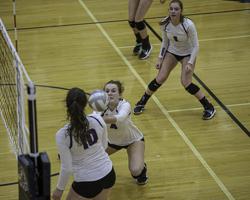 The match score Thursday belied the competitiveness of each set. The biggest lead either team had was eight when Chaska went up 19-11 in the opening bout.

Senior libero Brier Ziemer had four of her match-high six aces in the first set for the Hawks. The offense was finding its stride against a tall, athletic Orioles block.

St. Louis Park trimmed the deficit to 21-18 to force a Chaska timeout. Claiming that first set was critical for the Orioles’ attempt at their first win in the series in the last seven meetings.

“The girls worked hard. We obviously knew they had a really fast outside set,” said St. Louis Park coach Emily Minnick. “I think that was tough for us, we were chasing that play a lot defensively. Then I think our blockers were just a hair late. That was the toughest thing, we were chasing the play instead of being ahead of it.”

Minnick is in her first year as head coach of the Orioles and third in the program. She knows a thing or two about posing a good block. Minnick, a Willmar native, was a middle blocker at Division I North Dakota State University where she was an all-Summit League selection as a senior in 2016.

Chaska opened the second set on a 4-0 run before St. Louis Park found its footing. More back and forth continued until St. Louis Park claimed its first lead at 19-18 but a 7-0 Hawks run set things straight for the home team.

The third set was as tight as the first two, though Chaska never trailed.

Christ came on strong late to make it a short night for Chaska.

“We knew that they had strong middles and one of their outsides,” said Christ, one of four 6-footers on Chaska’s roster. “We knew we had to set up the block on them to help out our defense.”

The Orioles got five kills apiece from middle hitter Raegan Alexander and outside hitter Hannah Howell, who are both seniors.

St. Louis Park will have a chance at revenge when it hosts Chaska in the regular-season finale Nov. 24. The Orioles are in the thick of the race for the top seed in the Class 3A, Section 6 playoffs, which features Metro West teams like Benilde-St. Margaret’s and Bloomington Jefferson.

“I think we have a great squad, we have a lot of potential,” Minnick said. “We’re very athletic and we just have to put a few pieces together and we’ll be in a good spot.”

Chaska, meanwhile, is looking up at No. 4-3A Minnetonka. Unbeaten Willmar is also in the mix.

There are less opportunities to make a move with no regular-season tournaments and a reduced schedule primarily featuring conference opponents.

“Being such a short season, every single match is important and you can’t let down,”  Murphy said.

Six service aces, four of which came from senior libero Brier Ziemer, propelled the Hawks (6-1, 6-0) to victory in the first set. A 19-11 Chaska lead was trimmed to 21-18 by the Orioles, but the Hawks staved off the comeback to clinch the set.

Little separation was made again in the third, though Chaska never trailed and took the third set to claim its straight-set victory.

The Hawks keep their lead in the Metro West Conference standings after winning the title in 2019. St. Louis Park, which had a Class 3A state tourney berth a year ago, is third in the standings. 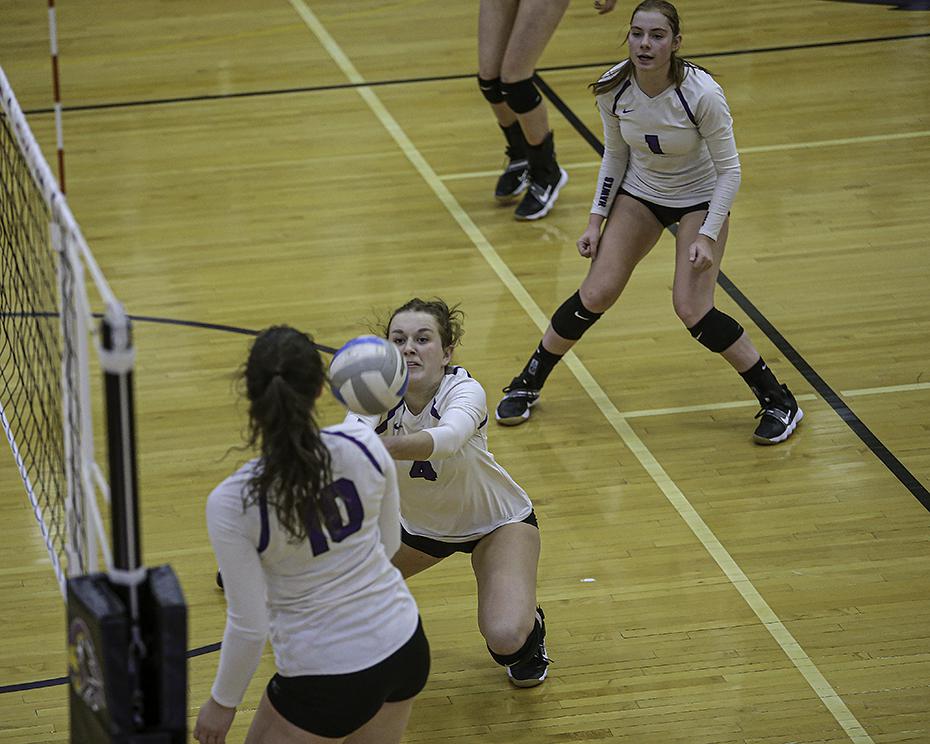 Chaska's Avery Roenberg went to the floor to keep a ball in play. Photo by Mark Hvidsten, SportsEngine