The Royals bested the Wildcats for the second time this week, with senior outside hitter Paige Thibault finishing with a team-best 19 kills in the victory. 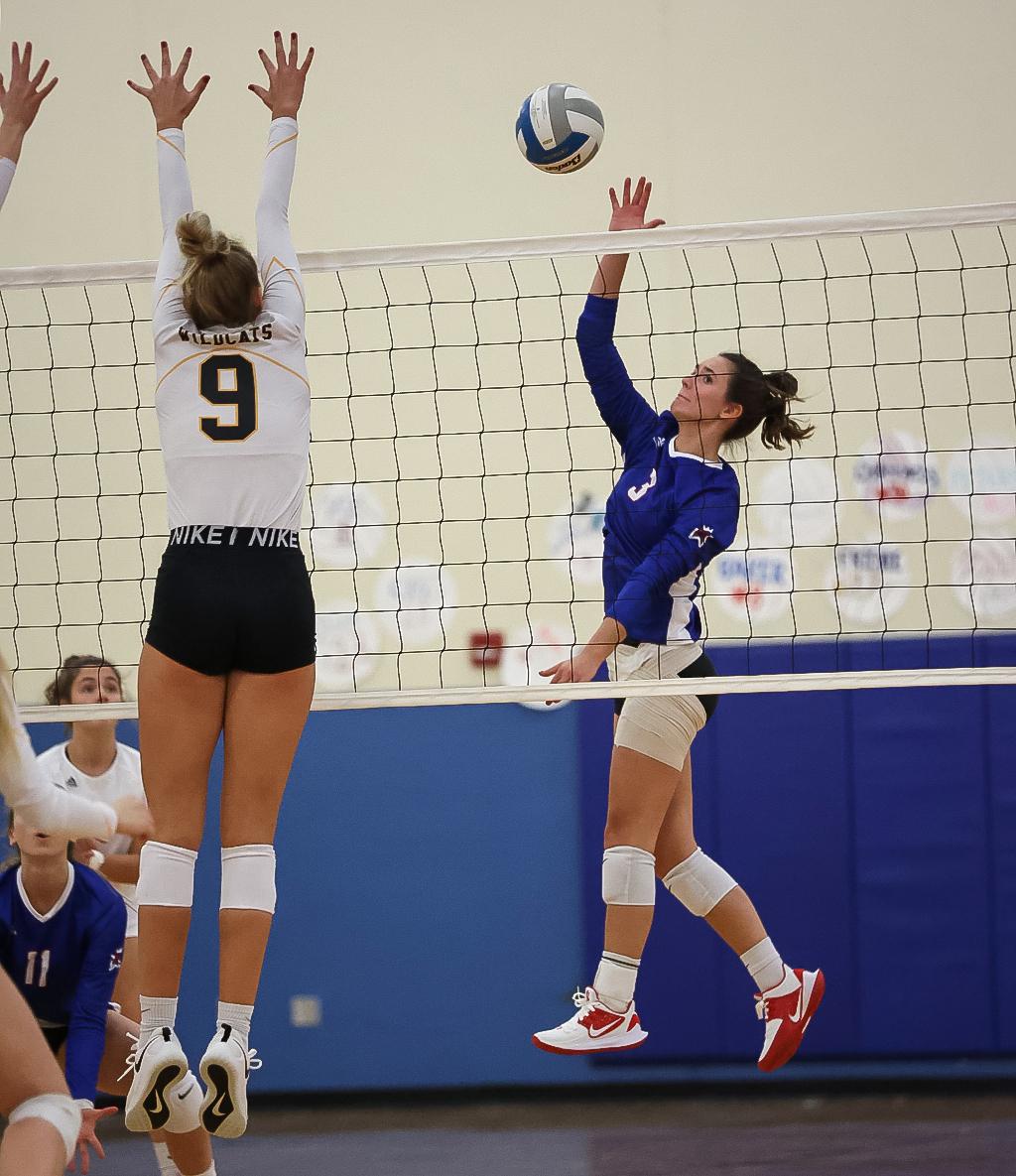 Paige Thibault (3) sends the ball past Ashlyn Olson (9) for a kill. Thibaults team-high 19 kills helped No. 4-2A Watertown-Mayer defeat No. 9-2A New London-Spicer in four sets on Thursday night. Photo by Cheryl A. Myers, SportsEngine

Like any fall sports team, Watertown-Mayer volleyball is facing the many challenges that come with playing prep sports during a pandemic.

But the Royals have one additional hurdle. Their main gym floor is under construction, meaning they had to adjust and make the auxiliary court their home floor this season.

Through seven matches, the Royals look hardly unfazed. They’re off to a perfect start to the season, including Thursday’s 19-25, 25-17, 25-13, 25-22 defeat of New London-Spicer at Watertown-Mayer High School.

When the Minnesota State High School League (MSHSL) ruled earlier this year that football and volleyball were being moved to the spring for a quasi fourth season, the administrators at Watertown-Mayer believed they had time to slowly begin the process of replacing the gym floor. 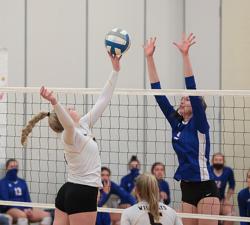 Then, the schedule changed again when the MSHSL reversed its decision and voted to move the volleyball and football seasons back to this fall. Between that decision and the crew working on the floor running behind schedule, the main gym was not ready for play. Following another delay, it became reality that the majority of the Royals’ home matches would need to take place where they normally practice.

“It’s been this roller coaster of, ‘we’re in, we’re out,’” said Watertown-Mayer coach Andrea Raser. “This is not the gym the seniors want to be playing in, but we are so blessed to be playing. We are very thankful for everything we do have.”

So far this year, that’s meant the matches are in a smaller gym with just a few bleachers scattered along the sideline. Though it might not have the feel of the Watertown-Mayer main gym, the Royals, ranked No. 4 in the Class 2A coaches’ poll, certainly haven’t lost anything in their game so far.

Watertown-Mayer (7-0, 7-0) has won every match in four sets or fewer so far this season, including on Tuesday, when the Royals beat the No. 9-2A Wildcats in four sets. Just two days after that match, the Wright County Conference foes met again.

Playing the same team in consecutive matches is par for the course in the conference this year.

In both matches, New London-Spicer (4-2, 4-2) got off to the better start. The Wildcats won the first set on Tuesday and did so again Thursday.

“Sometimes during this season, you come out thinking you beat this team and then come out a little slow,” Raser said. “You have to remember it’s a new game and a very good team. You have to be ready to play.”

Trailing by a set, the Royals eliminated some early errors and quickly recovered after cruising to wins in the second and third sets.

“I think we just didn’t come out strong right away,” said senior outside hitter Paige Thibault. “They were coming out and playing hard and swinging hard. Our serve receive was a little shaky at the beginning, which got better toward the end. Us being in system really helped us.”

Thibault is half of a sister duo that fuels the fire for Watertown-Mayer. Paige, a senior, is mainly relied upon for her hitting up front while Kate Thibault, a sophomore, spends most of her time in the back row as the libero. But both showed Thursday they can do whatever is needed of them.

“We’ve been playing all our lives,” Paige said. “My mom always taught us that if you’re going to play on the court, you have to be able to do everything. I think Kate and I kind of step up and go into that role if someone else is struggling.”

Like any sister relationship, there can be ups and downs. Raser said she gets a chuckle out of the moments when the two sisters run into each other, and times going for the same ball and give each other a look only they understand.

But for every look, there’s an outburst of celebration, especially when Kate, who’s shorter than her older sister, flies from the back row and gets a kill. She finished the match with five to go with 22 digs. Paige, meanwhile, had a team-high 19 kills Thursday.

“It’s just fun for us because you don’t see liberos jumping and swinging,” Paige said. “She’s short enough where she doesn’t get called for a back row attack. It’s funny to see because of how she goes up and how excited she gets.”

The Thibaults and the rest of the Royals continue to roll on despite some negative circumstances. Raser said the goal is to get at least one section match back in the main gym. For now, the group is winning matches and having a lot of fun doing it.

“I think one of our superpowers is just that we have fun,” Raser said. “If we stop having fun, you can all of a sudden see our demeanor drop. We don’t know how to play if we’re not having fun.” 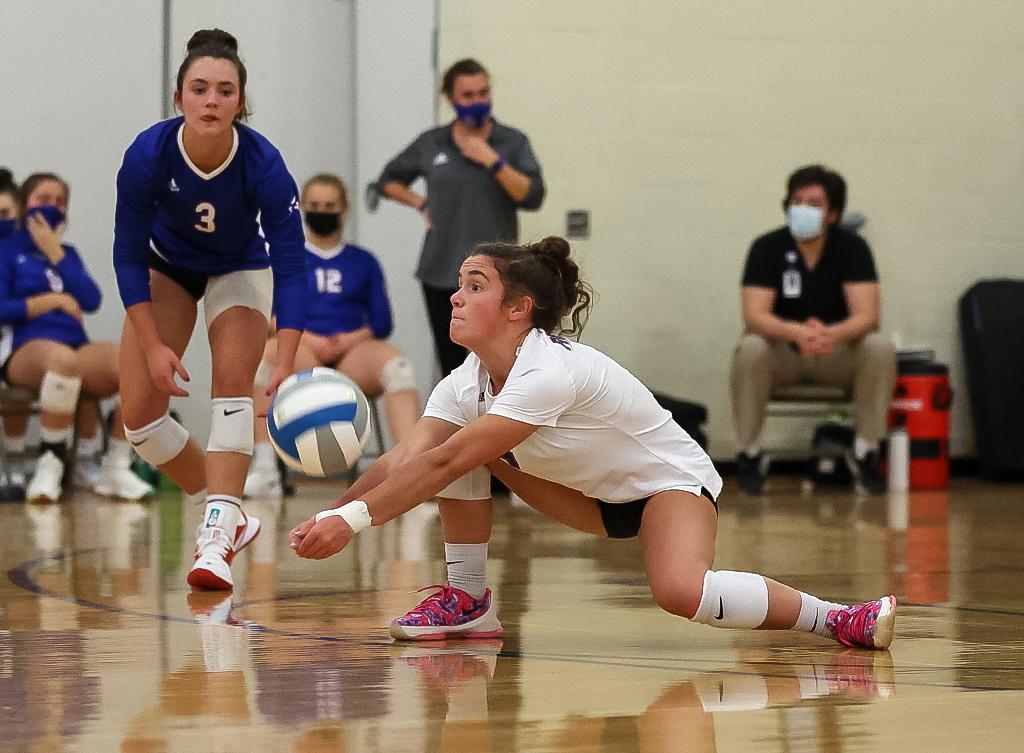 Sophomore libero Kate Thibault (4) gets low for a dig in the second set. Thibault finished with 22 digs helping the Royals rally to a four-set win at Watertown-Mayer High School. Photo by Cheryl A. Myers, SportsEngine

When Watertown-Mayer and New London-Spicer met on Tuesday, the Wildcats won the first set before dropping the next three in a loss. On Thursday, the teams met again and the script was repeated.

After Watertown-Mayer struggled with self-inflicted errors in the first set at home Thursday, the Royals recovered and cruised to a 19-25, 25-17, 25-13, 25-22 victory to stay unbeaten this season.

The Royals, ranked No. 4 in the Class 2A coaches’ poll, came back with vengeance following their sloppy play in the first set. The turnaround started with senior outside hitter Paige Thibault. A well-known commodity, Thibault was a major problem for the No. 9-2A Wildcats, finishing with a team-best 19 kills.

Thibault’s younger sister, Kate, was also in on the action. As a libero, she finished with 22 digs, five kills and an ace. Junior setter Natalie Ernhart stepped in for an injured Gabby Dulas and fed the ball well to her teammates, finishing with 42 set assists.

The biggest threat to Watertown-Mayer was Wildcats senior outsider hitter Aleah Zieske. She had the Royals on their heels throughout the match whether she was hitting or serving. She had 12 kills and four aces. 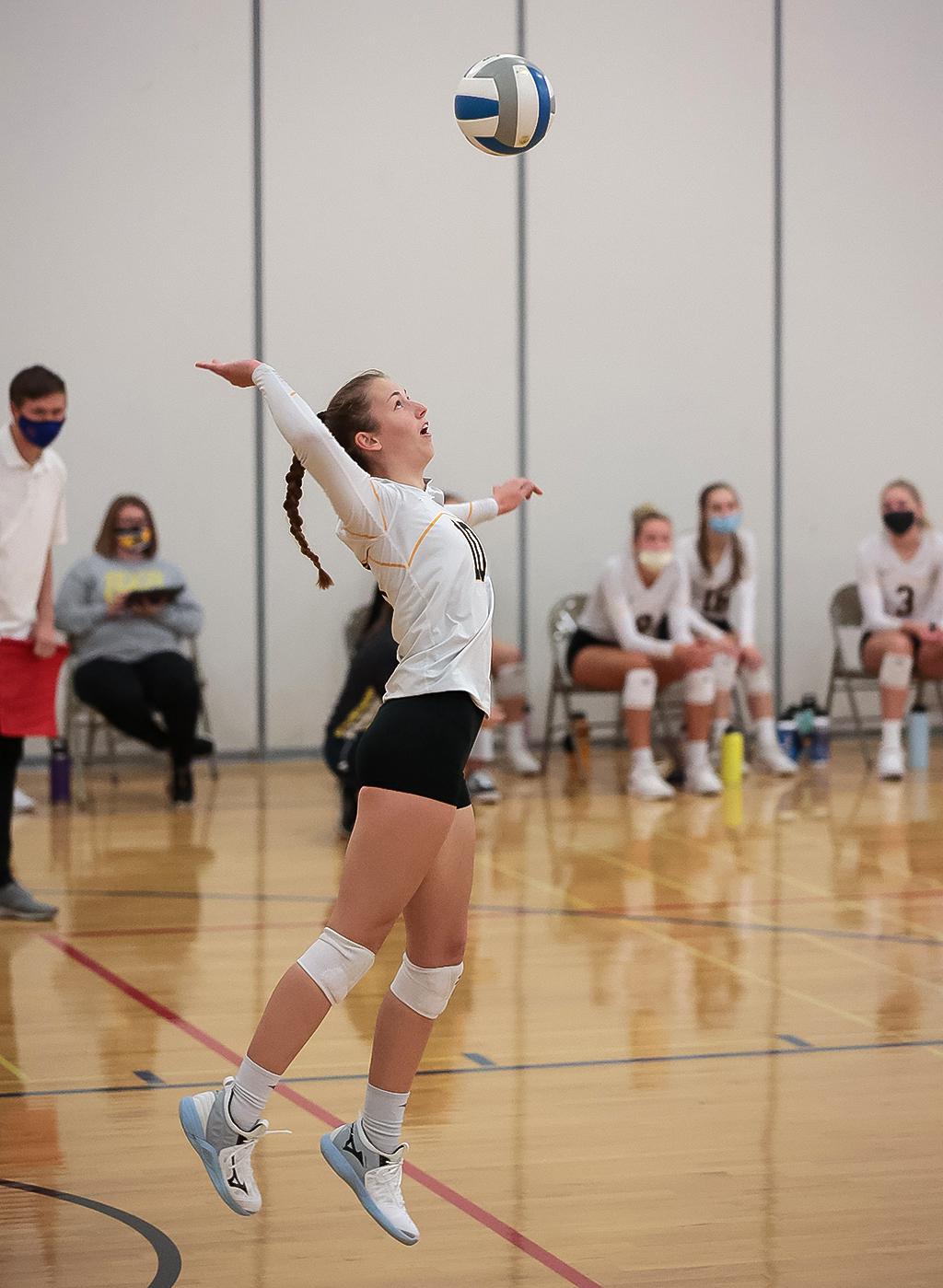