The Wildcats, the top-ranked team in Class 3A, came back from a 2-0 deficit to tie the match at 2 apiece. The No. 7-3A Sabers, however, showed poise and won the deciding set. 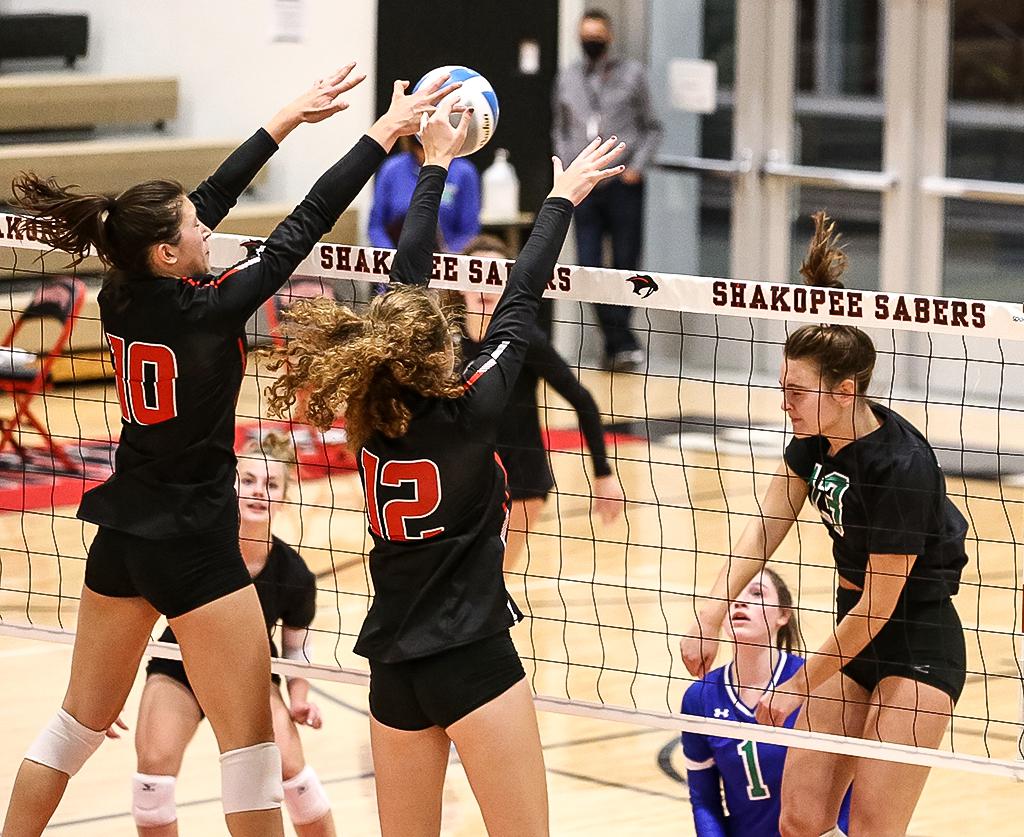 Shakopee's Ary Forsberg (10) and Maddie Meyer (12) team up at the net for a block in the first set. The Sabers took down the Wildcats in five sets on Wednesday night. Photo by Cheryl A. Myers, SportsEngine 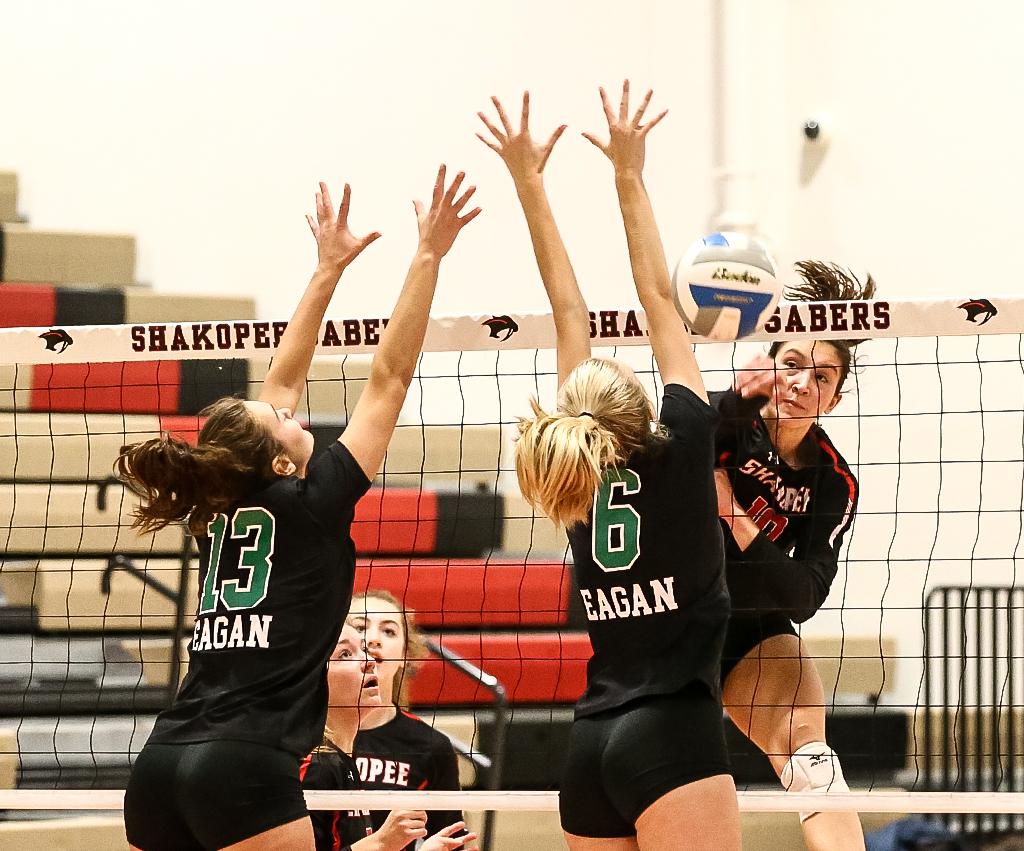 Ary Forsberg (10) sends the fall flying past Abby Moe (6). Forsberg helped lead Shakopee to a five-set win over Eagan for the first time since 2015. Photo by Cheryl A. Myers, SportsEngine

How competitive is the South Suburban Conference? The University of Minnesota currently features three players from the league’s pool of former volleyball talent — including one from each of Eagan (Ellie Husemann) and Shakopee (Rachel Kilkelly).

“It was a balanced team effort,” said Forsberg. “We came into the game with the mentality of ‘they may be the No. 1 team in the state but No. 1 teams lose.’” 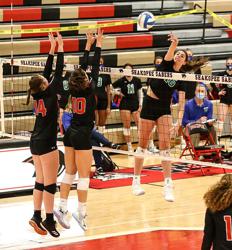 In the second set, Eagan, which finished runner-up in the Class 3A state tourney a year ago, found its mojo behind four-straight serves, including a service ace by junior right-side hitter and Marquette commit Sienna Ifill, and took its first lead of the night at 25-24 before ultimately falling behind 2-0.

The Wildcats (1-1, 0-0) were without the services of star setter Kennedi Orr, who is out with an ACL injury. Orr is a Nebraska commit who was last year’s Star Tribune Metro Player of the Year in volleyball.

When asked what she thought makes the conference so strong, Eagan coach Kathy Gillen said the competition makes you constantly figure out what you have to do get better. And, in the third and fourth sets of the match, her team did exactly that.

With an impressive duo of blocks and kills by 6-foot-5 junior middle hitter Kendal Kemp, and Wildcat attacks landing all over the court, Eagan rallied to tie the match 2-2 to force a deciding fifth set.

“We have all juniors and seniors this season — something I’ve never had before,” he said. “We have some battles for positions but it’s a fun challenge for the coaches.”

Even with multiple ties in the deciding fifth set, Shakopee displayed impressive versatility on offense to defeat their conference rivals.

“We talked about how we’ve played Eagan enough to know that they always find a way to come back and we have to battle for every point,” Busch said.

With more than 1,000 wins between them — Gillen is in her 28th season at Eagan and Busch is in his 23rd at Shakopee — both coaches talked about the quality and consistency of play in the conference, as well as the success of the Northern Lights junior club volleyball league in the area (As if to prove their point, the Eagan bench was scattered with red and black Northern Lights backpacks).

In this shortened season that involves players spacing out in chairs along the sidelines, and won’t feature a state tournament what is the mood of the players and coaches?

The Sabers, ranked No. 7 in the Class 3A coaches’ poll, used impressive team defense to hold off a rally from the No. 1-3A Wildcats, who concluded last year’s Class 3A state tournament with a runner-up finish, after being up 2-0 before Eagan stormed back into the game.

The foes are slated to meet again on Nov. 4 at Eagan. 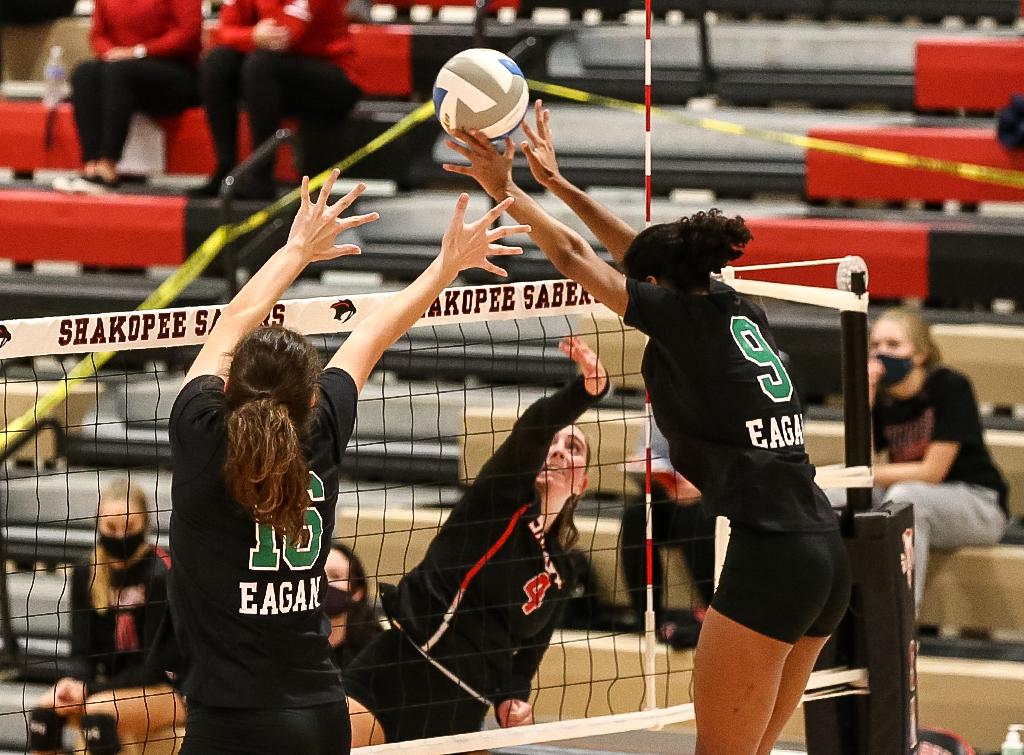 Eagan's Sienna Ifill (9) makes a block in the second set. The Wildcats staged a comeback after losing the first two sets but faltered in the fifth set to lose the match. Photo by Cheryl A. Myers, SportsEngine