Without fans at matches, volleyball teams will have to create own excitement

Nonessential persons are not allowed into buildings where students are being taught. No parents. No fans. No noise. 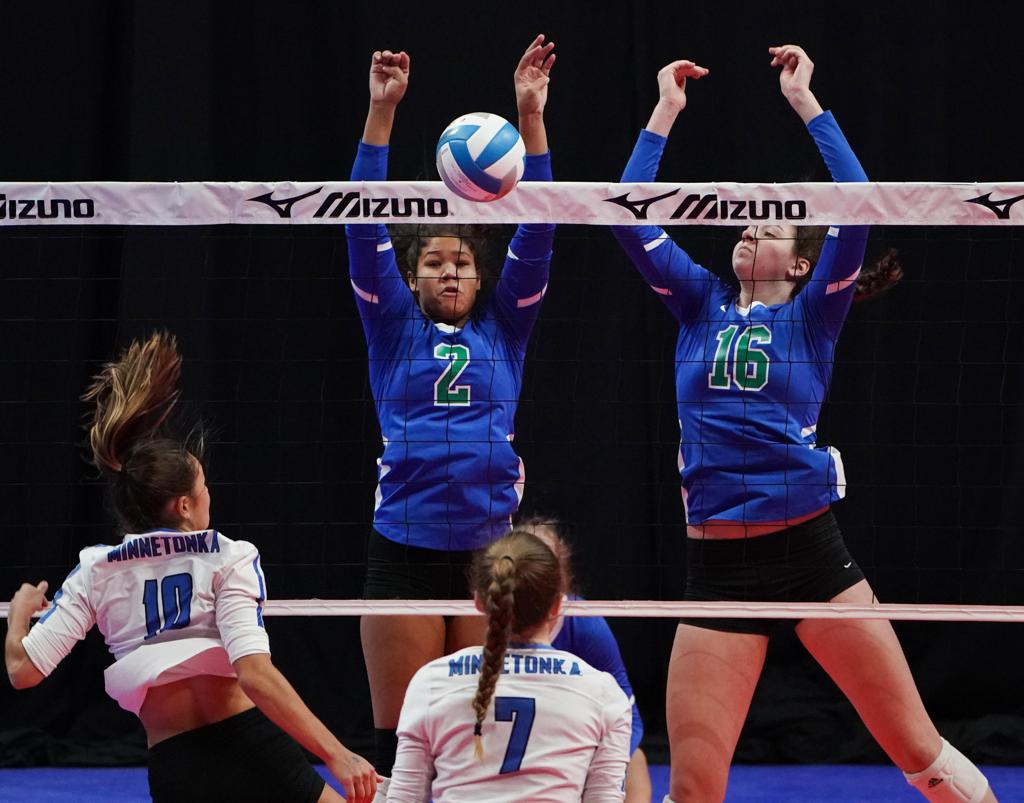 Some fans will be allowed after all at Minnesota high school volleyball matches.

Each team at indoor events will be allowed up to two spectators per participant, according to a Twitter post Thursday from John Millea of the Minnesota State High School League. Spectators must be wearing masks and be separated by at least six feet between household or spectator groups, not to exceed 25% of the event space's capacity.

Perhaps no sport this fall will feel the effects of the pandemic more than volleyball.

While most players and coaches welcomed the Minnesota State High School League board of directors’ vote to restore the fall season, the differences will be noticeable on the court as games begin Thursday, at least for those few who will be able to watch in person.

The most noticeable change will be the absence of fans. On the direction of the Minnesota Department of Health, nonessential persons are not allowed into buildings where students are being taught. No parents. No fans. No noise.

Champlin Park coach John Yunker expects the players will need an adjustment period. “Playing in front of no one? That’s something they’re going to have to figure out,” he said. “It’s going to be a bit different.”

Jordan coach Taylor Soine said teams will have to find ways to generate energy and momentum. “One of the major challenges will be creating our own energy without fans,” she wrote in a preseason preview. “It’s going to be a game-changer for both teams.”

Because parents still clamor to watch their daughters play, many schools have invested more resources in livestreaming services, allowing viewers to see the match remotely.

On the court, in addition to social distancing practices, volleyball teams will not switch benches between sets, as has been customary. There will be no team introductions before a match. Play will begin immediately after the national anthem. Face coverings and gloves are permissible during play and teams are asked to refrain from huddling between points.

The league did approve a concession to volleyball players at the Oct. 1 board meeting, allowing players the opportunity to try out for club programs in early November. Clubs have traditionally waited until the end of the high school season to hold tryouts per league rules.

But with the season running into early December, the league approved a one-year waiver to that rule.

When the Minnesota State High School League initially moved volleyball to spring, it put the local volleyball community into a tizzy. Spring, particularly March and April, is the heart of the Junior Olympic (JO) volleyball season, full of high-profile regional and national tournaments. It’s also the heart of college recruiting season, with coaches out en masse watching players. After losing much of last spring to COVID-19, players were dreading being forced to choose between playing for their high school team or positioning themselves for the future. Coaches and players breathed a sigh of relief when the fall season was reinstated.

The Wildcats have played in seven consecutive Class 3A championship matches, having won titles in 2013, 2015 and 2016. It’s a testament to the depth of the program and coaching by Kathy Gillen and her staff that the Wildcats remain on top while other programs rise and fall. That state tournament run likely would have reached eight this year if the pandemic hadn’t shortened the postseason. Setter/hitter Kennedi Orr is the most versatile player in the state and a peerless leader. Middle hitter Abby Moe is strong and quick at the net. And a trio of talented juniors — Sienna Ifill (OH), 6-5 Kendal Kemp (MH) and Simara Amador (DS)— make the Wildcats once again the 3A standard-bearer.

Who would normally be next?

Which other team would have reached the 3A final this year? It makes sense to check out Section 1, where Northfield returns all but two starters from the team that went 28-2 but lost in the section semifinals to Lakeville South. Both libero Emma Torstenson and outside hitter Megan Reilly are elite-level players. If sophomore Teagan Timperly can ably fill the setter position, Northfield is primed to take off. Don’t sleep on either of the Lakeville teams. South boasts an elite combo of 6-foot-3 middle hitter Ava Moes, a Tennessee commit, and setter Teagan Starkey. North has most of its team back from a year ago, led by dynamo Maddy Hornyak, a 5-11 outside hitter who makes up in grit what she lacks in height.