Expectations vary for Polars' volleyball, football teams, excitement does not

On the first official day of practice -- pushed into late September by coronavirus concerns that temporarily postponed fall seasons into the spring -- the volleyball and football teams at North St. Paul were all about energy and optimism in their returns to the court and field. 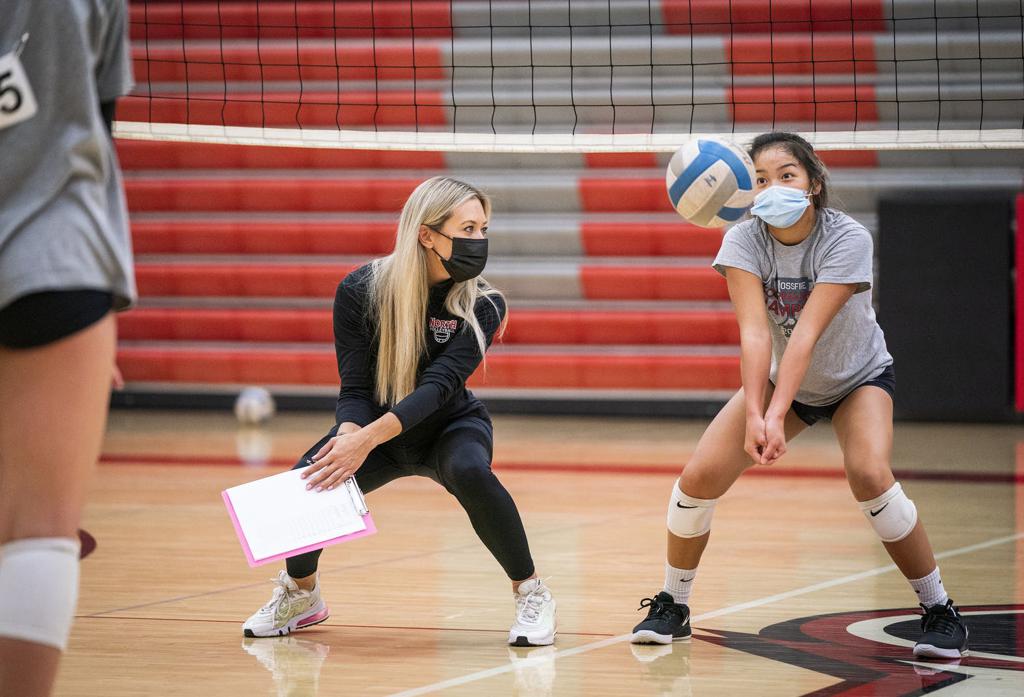 On the first official day of practice, the volleyball and football teams at North St. Paul were all about energy and optimism, a new season barely two weeks hence.

Their backgrounds tell opposite stories. The Polars’ volleyball team is fresh off the best season in team history, finishing third in the Class 3A tournament last fall in their first state tournament appearance. The football team, conversely, has struggled to find success, having lost 31 consecutive games dating to Sept. 30, 2016.

Monday, however, it was hope that shown in the eyes of the players and coaches of both teams, urged by myriad possibilities that lay before them.

“It gave everybody a bump for sure,” said volleyball coach Stephanie Blanda of the carry-over from last year. “Maybe a little ego, too, but that’s OK. There’s a lot of energy, a lot of excitement, a lot of people ready to come back.”

The reason was simple, said libero Jenna Rubbelke, the only senior on the Polars’ roster.

“We were the first team to ever go to state at our school, so that was so exciting,” she said. “It was a really fun year.”

Before the Minnesota State High School League resurrected the volleyball season this fall, Rubbelke had used the freed-up fall schedule to do something she’d never done before: She went out for the tennis team. And wound up as the team’s No. 1 singles player.

“I got to do some new things,” said Rubbelke, who will play college softball at Hamline for her father Joe, the Pipers head coach. “I hope to go out for basketball and then play softball. It’s been a pretty good year, actually.”

Said Blanda, “You want to talk about somebody who’s an athlete, she’s the definition of that.”

Blanda added that the 2020 edition of the Polars, after graduating eight seniors, has a ways to go to reach the levels of last year’s squad. But she expects residuals from last year’s state tournament experience to bridge the gap and is bullish on her young players.

“We have a couple of players who are 11th-graders who have developed immensely since last year,” she said. “That’s a huge developmental period, between 10th and 11th grade, both physically and mentally. We have lost a little bit from last year, but we still have a lot of talent.”

Record not withstanding, football coach Gene Teigland believes his team is pointed in the proper direction. The proof, he said, was evident in the good turnout at Monday’s practice.

“Our numbers are good, pretty comparable to the way they would be if this were a regular season,” he said. “We’ve done a good job of creating a culture where guys are welcomed here and they want to be here.”

He said he and his players had moved on from the fall season and were preparing for spring football when the league’s board of directors voted to restore football to the fall.

“We were preparing for the spring when they made the change but we got the guys we needed to get out,’’ he said. “And they’ve had great attitudes. I couldn’t be happier.”

Despite the losing streak that goes back four seasons, Teigland said morale hasn’t been an issue.

“Our staff has instilled in these guys that we’re going to fight to win — we’re never going to shy away from that — but at the same time we’re going to treat you with respect and we’re going to teach you good football and you’ll get better. And they’ve responded to that.”

Teigland’s son Ben is the Polars’ senior quarterback. He said the key to staying positive is a short memory.

“We’ve kind of forgotten about [last year], honestly,” Ben said. “Nobody really talks about it.”

Flipping the mental switch back to a fall season wasn’t much of a problem either for the quarterback.

“Football, at the end of the day, is 11 guys on offense, 11 guys on defense and you go play. It doesn’t matter when it is,’’ Teigland said. “The excitement level is always high as soon as you start playing.”