Wayzata knocks off No.1 Eagan to win 3A championship

Sophie Jesewitz had 25 kills and Kate Long had 20 for the Trojans, who won their first volleyball state title. 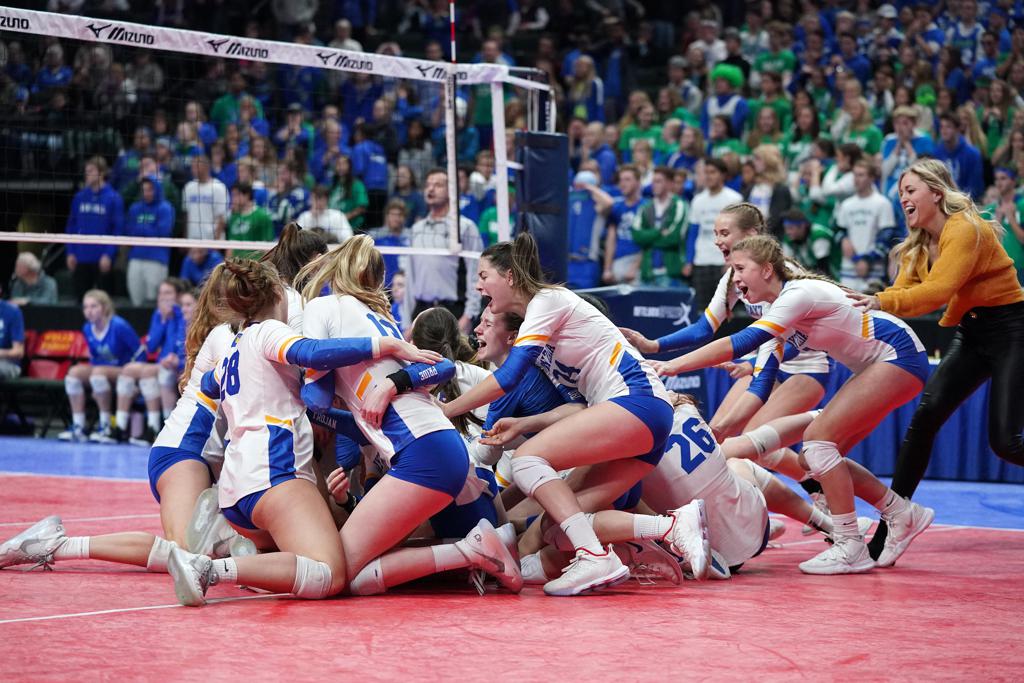 Wayzata players celebrated with her teammates after they defeated Eagan in the fifth set to win the Class 3A championship. Photo: ANTHONY SOUFFLE • anthony.souffle@startribune.com

Three months ago, when his team was kicking off the season, Wayzata coach Scott Jackson felt his team had state championship potential. In fact, there were times when he pictured a Wayzata/Eagan championship match. Two heavyweights closing out the season on volleyball’s biggest stage, at Xcel Energy Center.

Jackson’s vision came true Saturday and it’s safe to say the result lived up to his hopes. In fact, exceeded them, both in length and drama.

“I’m speechless,” Jackson said. “It was a grind-out affair, never believing we were done. There were some moments where it was dark and troubled, but we just kept grinding.”

Eagan had one chance to close out the match after kill by Abby Moe made the score 14-13 Wildcats. But Wayzata rallied and scored three straight points, the last on a tip kill by senior Kate Long that went against what they had talked about in pre-match preparations.

“Going against Scott’s words, I tipped on the last point,” Long, who finished with 20 kills, said with a laugh. “It’s the capital error, but I tipped deep-line on match point. It’s the goal, to end your senior year this way.”

Said Jackson, “We wanted to go out on the arm of the kid I had the most confidence in at that point, and that was Kate.”

“It was a battle,” Eagan coach Kathy Gillen said. “Wayzata played a great game. If we play this game 10 times, we probably each win five. It was just great finish to a great season.”

Wayzata, attacking from the outset, jumped to a quick lead in the first set and rode it to a 25-20 victory.

Eagan adjusted in the second set, closing down the alleys that Wayzata was finding with a strong block. The set was practically over before Wayzata countered the adjustment, with Eagan winning the set 25-14 to tie the match.

The third and fourth sets settled into a back-and-forth pattern, with each team taking turns making plays, only to see the other come up with answer. Wayzata won the third set 25-21, Eagan the fourth 25-19, setting up the dramatic fifth set.

For Eagan (31-1), it was a third consecutive loss in the state championship game.

“I’m exhausted from it,” Gillen acknowledged with a weary chuckle. “But I can’t look back again. Last year, I was super proud of the team and what they did and I’m equally proud of this team. I don’t know what we could have done much different.”

This was the championship match that was hoped for way back in August, when teams began training.

Wayzata coach Scott Jackson even before the match that this was the matchup he expected in the Class 3A final.

For Eagan, it was the Wildcats’ first loss of the season and third consecutive loss in the state championship game.

With the match tied two sets apiece, the fifth set pitted Wayzata’s relentless attack against Eagan’s depth and versatility. Neither team gained much of advantage, with neither team taking more than a one-point lead.

Eagan had one match point after kill by Abby Moe made the score 14-13 Wildcats. But Wayzata rallied, and closed out the victory on a kill by senior Kate Long, setting off a wild celebration.

Wayzata (31-3) jumped to a quick lead in the first set, passing with accuracy and attacking at every opportunity. Sophie Jesewitz and Kate Long had six kills each in the first set to lead Wayzata to a 25-20 victory.

Eagan adjusted in the second set, closing down the alleys that Wayzata was finding with a strong block and getting Wayzata out of system. The Wildcats took advantage and blitzed the Trojans, tying the match with a 25-14 victory.

The third proved the most competitive volleyball of the match to that point. Wayzata found its rhythm, but Eagan’s now-snug defense was holding firm. Wayzata took control by scoring six of seven points after Eagan had tied it at 13, with Jesewitz and Lily Emlong providing the spark. Wayzata closed out the set on a tip by Katelyn Empkey for a 25-21 victory and a 2-1 lead.

As it had all match, Eagan fought back in the fourth set. Setting outside hitter Sienna Ifill and Ling Wong at the pins, the Wildcats took a 7-4 lead. But Wayzata and its front-row length sparked a rally and the Trojans took a 13-12 lead. The remainder of the set was two heavyweights taking big swings at each other, each responding to other in like fashion.

Eagan wrested control by going on a 5-1 run late in the set and alternating points the rest of the way. The set ended with a Wayzata net violation, giving Eagan a 25-19 victory, squaring the match and setting up the dramatic final set.

The Wildcats (31-1) reached the finals with a three-set sweep of first-time tournament entrant St. Louis Park. They needed five sets to dispatch with Minnetonka in the semifinals.

Wayzata, playing what Jackson said was the best volleyball it had played all year, needed only three sets in both rounds to defeat St. Michael-Albertville in the quarterfinals and North St. Paul in the semifinals.

Sophie Jesewitz had 25 kills and Kate Long had 20 for the Trojans (31-3). Sienna Ifill had 13 kills for Eagan, which lost its first match of the season after 31 victories. It was the Wildcats' third consecutive championship game defeat.