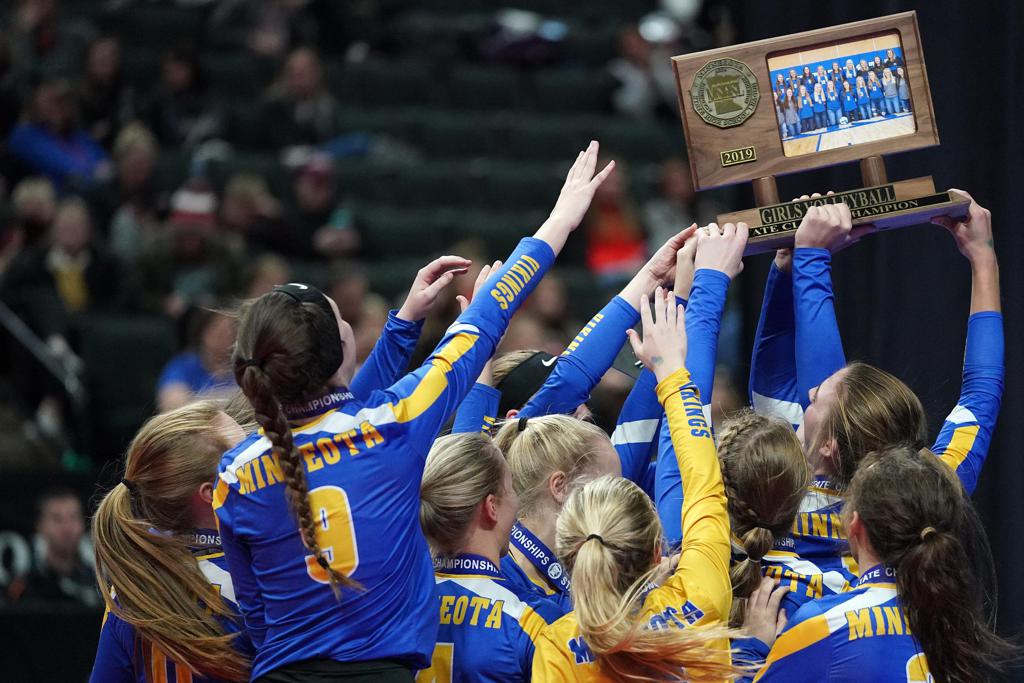 The ball was, more often than not, right where the Waterville-Elysian-Morristown hitters wanted it. They’d leap, swing their arms and hit balls that, for most of the season, would the smack the floor on the other side of the net with a resounding thud.

Only this time, those balls were coming back at them.

Minneota, the defending champs, employed a remarkably air-tight defense, augmented by a full-bore attack, to defeat No. 2-seeded W-E-M 25-19, 25-19, 25-20 on Saturday to take its second consecutive state championship at Xcel Energy Center.

Minneota (33-3) is led by two dynamic hitters in sophomore Natalie Rolbiecki and junior Abby Hennen. But the Vikings preach defense first, and it was that stonewall defense that led to their victory.

They had 90 digs as a team and put up a block at the net that routinely stymied the W-E-M hitters. 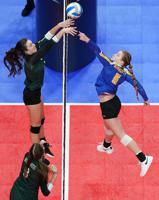 “We’re just a really scrappy team,” Hennen said. “We don’t want a lot of easy balls to hit the floor and that kind of frustrates another teams.”

Perhaps the most notable defensive play in a match full of them came in the second set. Buccaneers hitter Kylie Pittman drilled a ball toward the corner that seemed a certain kill. But Morgan Hennen, Abby’s older sister, somehow got below it and not only dug out but sent it back for a crucial point.

It became obvious that W-E-M (34-3) was not about to solve the Minneota defense.

“There’s nothing better than if they’re swinging really hard and it comes your way and then goes flying back the other way,” Abby Hennen said. “There’s nothing more fun that that.”

W-E-M outside hitter Delaney Donahue said, “It makes it hard. It’s frustrating that then can never give up on a ball.”

Abby Hennen led Minneota with 15 kills, while Rolbiecki smacked 14 and Morgan Hennen chipped in with 12. Toryn Richards had 10 kills and Trista Hering had 9, along with 5 blocks, for the Buccaneers.

Minneota won its second consecutive Class 1A championship with a 25-19, 25-19, 25-20 victory over Waterville-Elysian-Morristown on Saturday at Xcel Energy Center.

Abby Hennen had 15 kills, Natalie Rolbiecki 14 and Morgan Hennen 10 for the Vikings, who were the No. 1 seed in the tournament.

Toryn Richards had 10 kills and Trista Hering 9 kills and 5 blocks for the Buccaneers.