Trailing 9-1 in the fourth set, Belle Plaine players regrouped in a huddle and rallied for the victory. 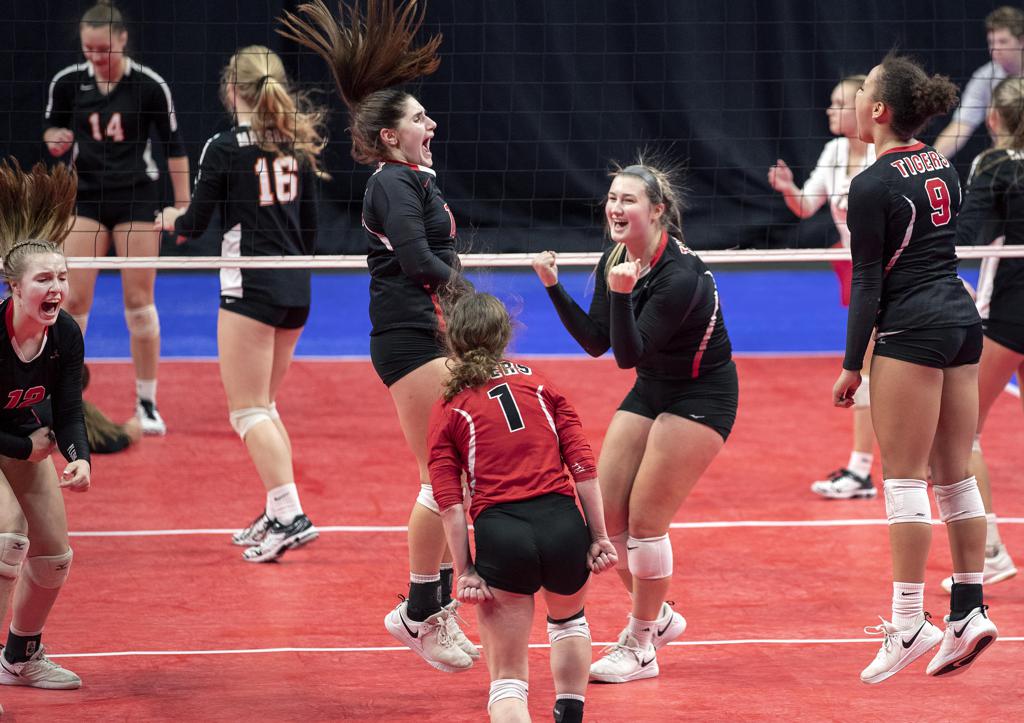 Leading two sets to one against a perennial tournament team, Belle Plaine was not going to let this one go to a fifth set. Even after getting down 9-1 in the fourth set.

“We all, in a huddle, just looked at each other and said, ‘let’s go,’” Belle Plaine senior middle hitter Lizzy Hilgers said. “We know we can do this and make this play, and then we all had confidence in each other again.”

Unseeded Belle Plaine got itself back in the set and completed the upset of second-seeded Marshall 25-15, 25-20, 21-25, 25-22 in a Class 2A quarterfinal Thursday at Xcel Energy Center.

“But we did keep going after them,” Foust said. “Even when we were down 9-1. We were able to come back one point at a time.

“I think we just did a good job going after them, after them and not getting frazzled against a very good, very solid program in Marshall.”

Marshall (28-7), last year’s Class 2A runner-up, was without senior middle hitter Paige Andries, who broke her hand in practice on Monday. The team found out just before game time Thursday that she wasn’t able to play, according to Marshall coach Dan Westby.

Westby, while crediting Belle Plaine for putting pressure on his team offensively, blamed himself for not getting his players ready for the match-up and trying to make adjustments on the fly.

“We were scrambling, and that’s my fault,” Westby said. “I think this one’s on me.” 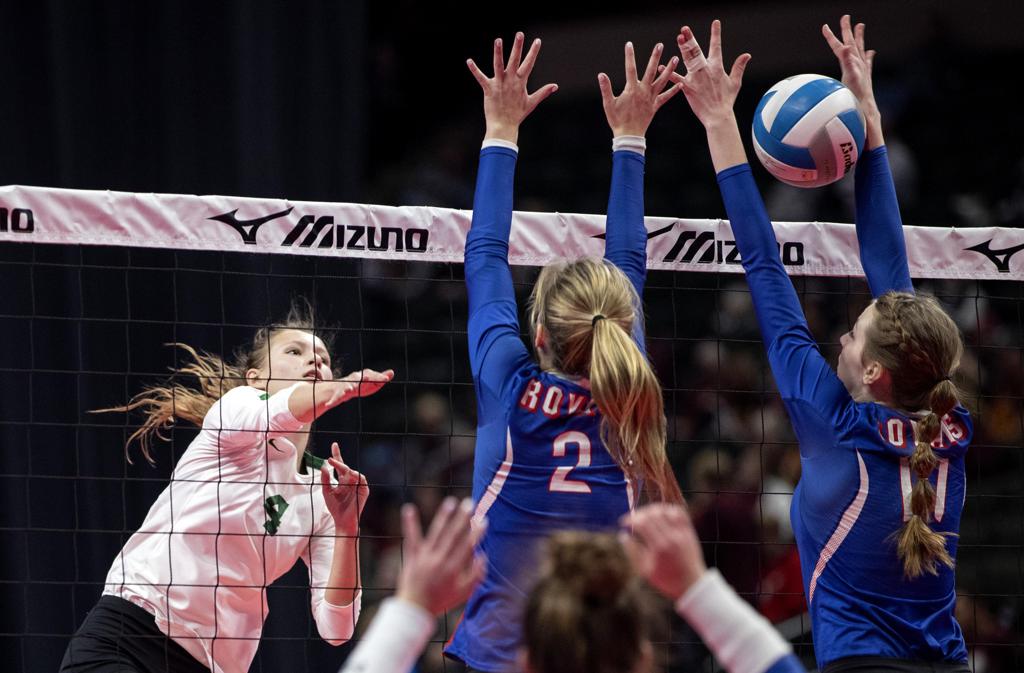 No. 5 Concordia Academy shines in sweep

Watertown-Mayer was down two sets to none and trying to get back in the match with a 5-0 run to get within 13-10 of Concordia Academy-Roseville.

Then Beacons coach Kim Duis called a timeout to get her players to regroup, knowing they needed to shut down their opponent and not let it back in the game.

“We had some really good plays there to kind of get the momentum,” Duis said. “So I think it was a calming of the waters a little bit.”

It’s the third consecutive year the Royals (24-7) have lost in the state quarterfinals. After a slow start, they tried to get back into the second set with four straight points to get it to a 21-18 deficit.

“It’s disappointing that we step on this stage, we earned our way here, we didn’t get it handed to us, and we go out there and we just don’t step up to play,” Royals coach Andrea Raser said. 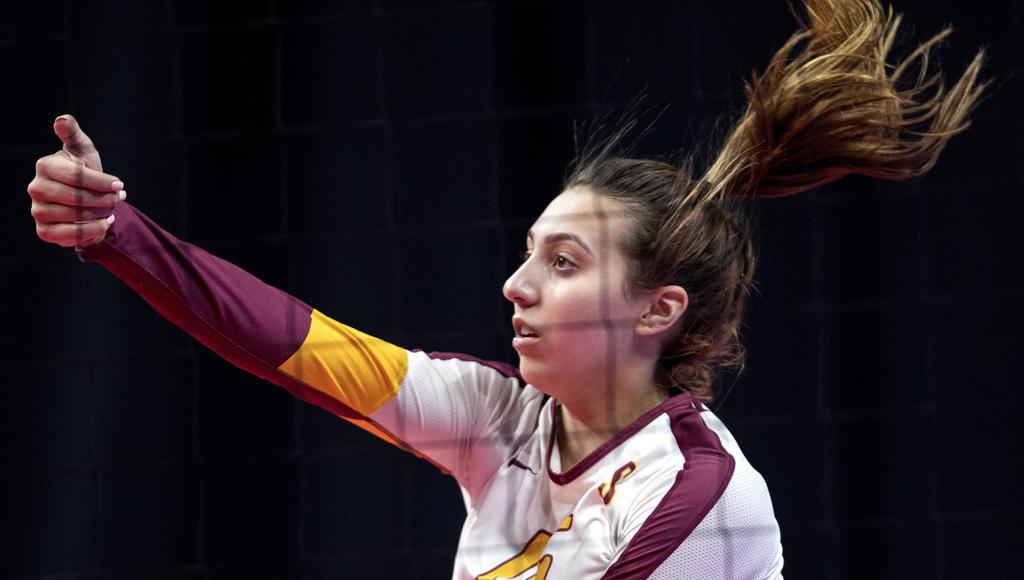 Kaitylyn Prondzinski (15) of Stewartville came down after a hit against Annandale. Photo: CARLOS GONZALEZ • cgonzalez@startribune.com

Stewartville's return to state is triumphant

The offense of top-seeded Stewartville in Class 2A packs some power, evidence by its 43 kills in their quarterfinal victory over Annandale, which had just 25 kills.

Junior setter Jaidyn Brower had 32 set assists, helping get the ball to senior outside hitters Kaitlyn Prodzinski with 12 kills and Lily Welch with 10 kills.

“I know they can take care of the ball, and they can put it away,” Brower said. “It’s really fun to play with them.”

“I feel more calm and collected than I did as an eighth-grader,” Prodzinski said.

The Cardinals (27-4), making their first state tournament appearance, tied the match at 8-8 and 9-9 in the third set but weren’t able to mount a comeback.

“They run a pretty quick offense, and we just struggled to stop it,” Annadale coach Michelle Macalena said. 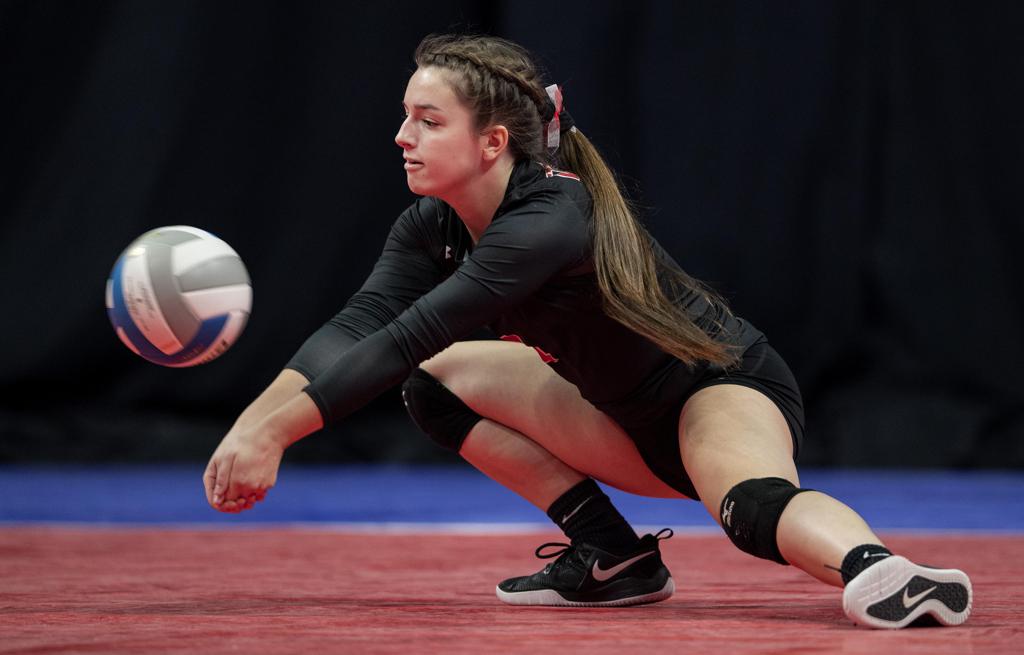 Kylie Kline (1) of North Branch reached to dig out a ball in the match against Pequot Lakes. Photo: CARLOS GONZALEZ • cgonzalez@startribune.com

North Branch less taxed than a year ago

This year’s quarterfinal for the defending champion was a bit different. No. 3-seed North Branch swept Pequot Lakes 25-20, 25-11, 25-18.  And it felt good for the Vikings coming off the court, coach Mike Selbitschka acknowledged.

“I think we’ll obviously have a little more legs in us, and a little more energy than we had going five games each set last year,” he said.

The Vikings (28-4) started the second set on a 13-0 run and didn’t let their opponent get closer than nine points during the set.

The Patriots (27-6), in their first state tournament appearance since 1994, kept the third set an even, with back-and-forth play before the Vikings ended it on a 10-4 run.

North Branch was led by senior and Star Tribune All-Metro outside hitter Cianna Selbitschka with her 21 kills and 14 digs.

“That second match (set) got tougher as they got a little bit more aggressive with their serving,”  Pequot Lakes coach Chris Ganley said. “We haven’t been here in 25 (years), so it’s kind of a realization of how big a stage we’re on.”