The Wildcats junior setter, who has committed to play at Nebraska, also digs and passes with uncanny accuracy and becomes a feared hitter when she moves to the front row. 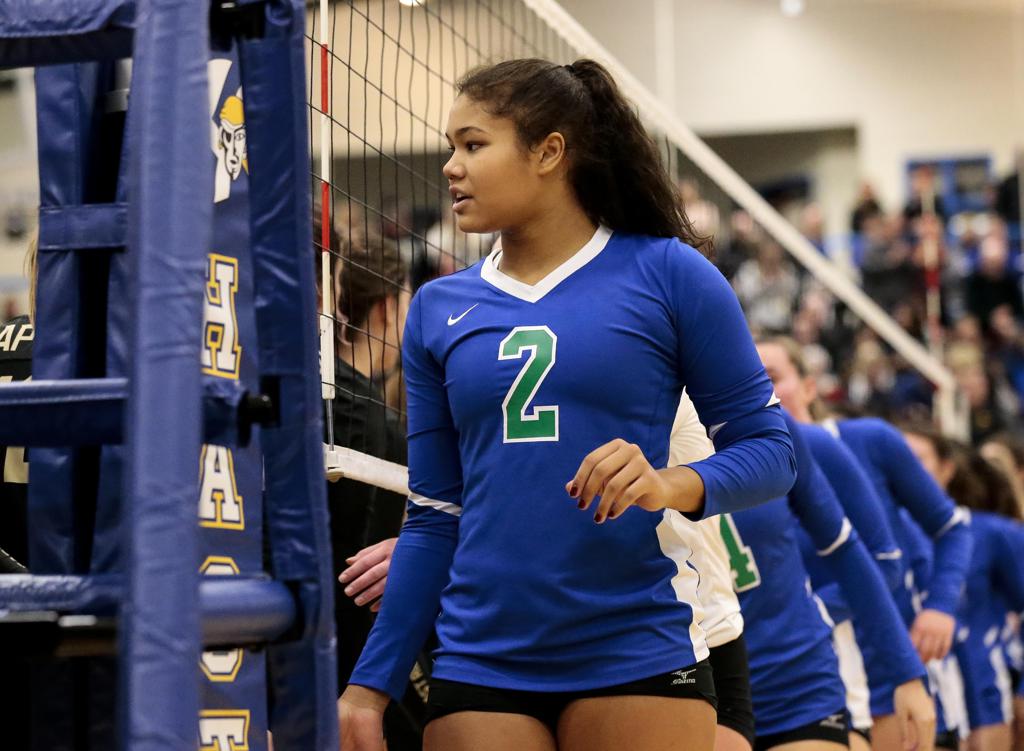 “I learn something new from hitting every day,” said Orr, who is officially listed as a setter but contributes from all over the court. “Playing the all-around game has helped with my volleyball IQ.”  Photo: Cheryl Myers, SportsEngine

Spend time with Eagan junior Kennedi Orr and two things stand out: Her hands are amazing, large with long, smooth fingers that can make a volleyball do just about anything she wants. Equally impressive is her comfort with her place as the most well-rounded player in the state, the result of what those hands allow her to do.

Orr is officially listed as a setter, the position she will play when she moves on to the University of Nebraska. But at Eagan, she’s so much more. She digs and passes with uncanny accuracy, and when she moves to the front row, she becomes a feared hitter.

“She’s a setter, but we need her to do so much more,” Eagan coach Kathy Gillen said.

It’s that versatility, the ability to just about anything on the volleyball court and do it well, that has earned Orr the 2019 Star Tribune Metro Volleyball Player of the Year.

Orr said playing multiple positions has broadened her overall game. “I learn something new from hitting every day,” she said. “Playing the all-around game has helped with my volleyball IQ.”

Going into the last week of the section playoffs, Orr’s stats reflected her all-around skills, with 170 kills and 269 set assists in just 19 matches.

Still, it’s at setter that Orr’s talents are most appreciated. As Gillen puts it, “Have you seen her set? It’s just amazing.”

For as long as Orr can remember, volleyball has been her sport of choice. Unlike most kids who try on various sports for size when they’re young, she knew right away that this was the sport for her. 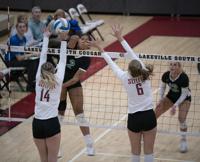 Eagan's Kennedi Orr (2) shot the ball through the defense of Lakeville South in a Sept. 26 match. Photo: JEFF WHEELER • jeff.wheeler@startribune.com

“I’ve always loved volleyball,” she said. “My whole family played it, my sister played it from a young age. For me, it’s always been ‘Well, this is my sport.’”

If it was early exposure that put Orr on the right path, it was following around her older sister Brie — a two-time All-Metro first-team selection at Eagan who is now a junior setter at the University of Iowa — that kindled her passion. Anything Brie did, Kennedi followed.

“Brie started playing volleyball when she was 9, so I was 5 when I started,” she said. “I started watching every single one of her games. She was a middle [hitter] at first, so I would grab a ball from the cart and I’d hit against a wall, just for fun.”

Said Gillen, who has coached both Orr sisters, ‘‘If Brie held a ball, Kennedi held a ball.”

As Kennedi grew and honed her talents, her reputation grew with her. She started playing up an age group, then two, for her club team. She became a member of the Eagan varsity — perhaps the premier high school volleyball program in the state — as a seventh-grader.

She caught the eye of organizers at USA Volleyball and is considered an elite level setter. She missed three weeks of the high school season this year while playing for Team USA at the FIVB U18 world volleyball championships in Egypt.

“That was really cool, to get to experience different things,” she said. “Like, the girls we played against, the day after they got back [from the tournament] they’d go back and play for their professional teams, so it was like we were playing professional volleyball, which was super cool.”

Orr stood out, taking home the honor of the tournament’s top setter while helping the team win the gold medal.

All the while, her mind was on her high school team. Here she was, a bona fide world traveler, yet she couldn’t leave home behind.

“I was checking their scores and what was going on every day,” Orr said. “I missed my team.”

After the tournament was over and a day or two to reacclimate, Orr was back on the familiar court at Eagan, leading her team to an undefeated record.

“When she came back, I feel like we were just a little more consistent in every aspect of our game,” Gillen said.

“It’s so cool, going every year,” Orr said with genuine appreciation. “I don’t think we ever expect to make it to state, but it’s the type of thing where if we work hard and do what we’re supposed to, we should end up somewhere good.”