With their victory over the Crusaders, the Stars extended their winning streak to six matches and kept themselves in contention for the top spot in the Minnesota River Conference standings. 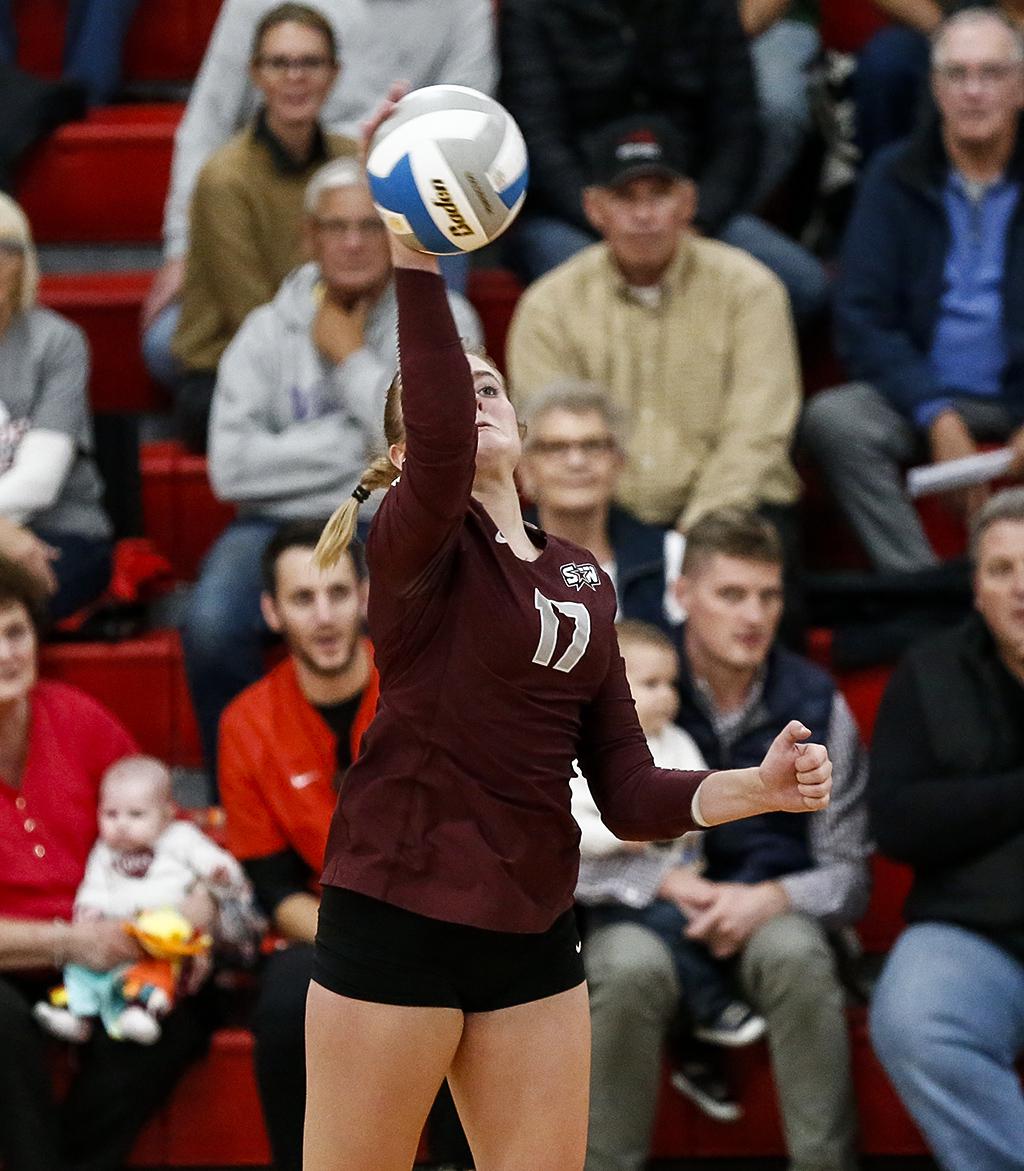 A pivotal second set was the key to Southwest Christian’s 25-21, 25-23, 25-21 sweep of Minnesota River Conference rival Mayer Lutheran in front of a nearly full house at Mayer Lutheran High School on Thursday evening.

“We knew they were going to be a formidable opponent,” said Southwest Christian coach Greg Sayuk. “We knew we were going to have to play well and thankfully we did.”

Coming into the contest, Mayer Lutheran had won eight of the last 11 meetings between the league rivals, including a five-set win on the Stars’ home court last season.

“The [match] last year was really competitive,” said Stars’ senior outside hitter Madeleine Lemkuil. “We worked on a lot of stuff in practice to better ourselves and we put ourselves in good position in the conference because of it.”

The Stars (16-6, 6-1) maintained control early, holding a three-to-five-point lead throughout the first-set victory over the Crusaders, who are ranked No. 1 in the Class 1A coaches’ poll, but winning the second set proved a tougher task for the No. 6-2A Stars. An 11-6 lead at the first timeout of the set turned into a four-point deficit as the Crusaders (19-2, 5-1) rode a renewed and energized bench and crowd to an 18-14 lead. 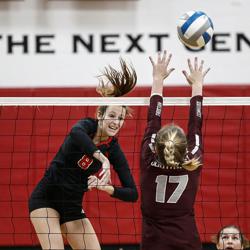 “This was probably our best game of the year,” Lemkuil said. “They were a tough team with great players and we had to match their intensity.”

Post-timeout momentum never really favored Mayer Lutheran throughout the night, but the second timeout taken in the set by Southwest Christian was a noticeable turning point. An 11-5 run, led by Lemkuil and sophomore outside hitter Estelle Haugen, quieted the crowd and gave the Stars a daunting 2-0 lead over the Crusaders, setting up the chance to win in straight sets.

“We had to bring our own energy,” Lemkuil said. “We cheered for each other and had fun. It’s tough to play games when the opponent’s bench and fans are loud like that, but we just fed off of our own fans’ intensity.”

Much in the same way as the first two sets, the teams played the first 18 points of the third set without much separation. Mayer Lutheran took its first timeout, giving its players a breather after several long rallies in a row left the set tied at nine.

“They have a really big block,” Lemkuil said. “[We] had to pick [our] spots and then we just swung hard.”

Two things in the third set swung in Southwest Christian’s favor. First, it finally managed to get some of the balls hitting off the ceiling of the gymnasium to fall in good spots on its side and in poor spots on Mayer Lutheran’s side. Second, the Stars managed to get their block set in place more consistently against the Crusaders’ varied and multi-faceted attack.

“Blocking was our top priority coming into tonight,” Sayuk said. “They have a tough attack to block against and we had to be in the right spot every time. Even then, sometimes they just made a really good play.”

“We try to be accurate and aggressive at the same time,” Sayuk said. “In some games [like tonight], we serve [and attack] really well at a high percentage.”

It seemed to sum up the night that a cross-court attack attempt by the Crusaders that sailed out of bounds was the match point for the Stars.

Lemkuil and Haugen combined for 25 kills and two service aces, along with some stout defense throughout the night. Mayer Lutheran’s attack was led by senior middle hitter Olivia Tjernagel, who had 10 kills and a service ace, and sophomore outside hitter Lilly Wachholz who rocketed 12 kills. 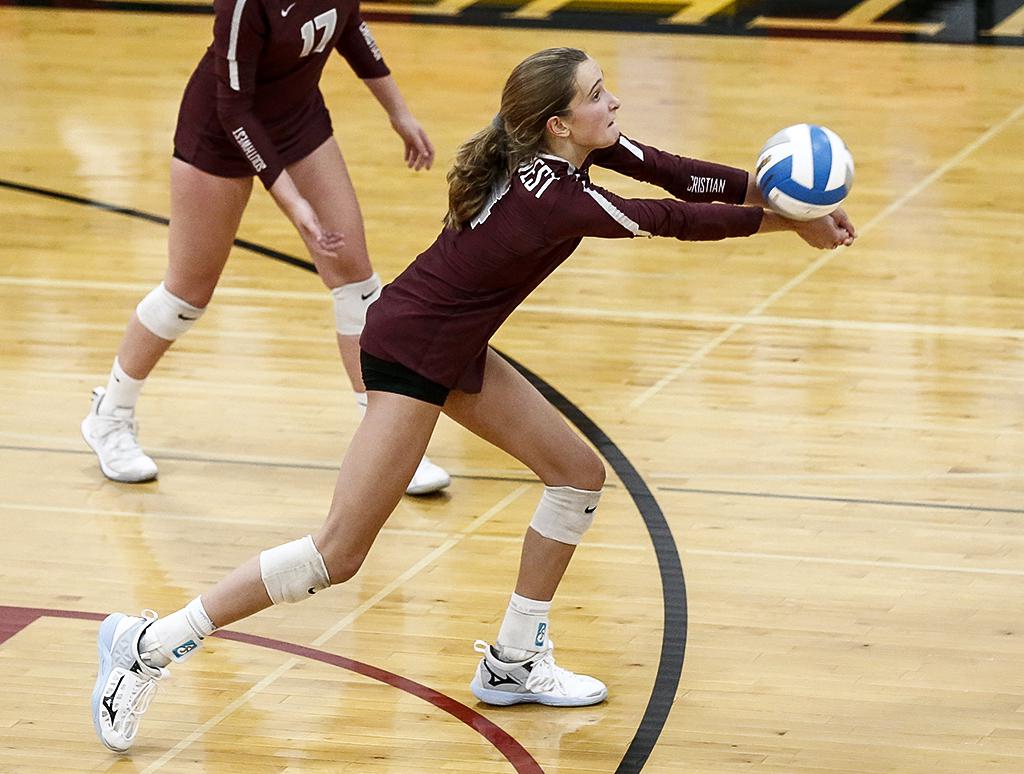 Sophomore outside hitter Estelle Haugen receives a serve in the second set. Haugen led the Stars with 13 kills at Mayer Lutheran High School on Thursday night. Photo by Cheryl A. Myers, SportsEngine

Southwest Christian, ranked No. 6 in the Class 2A coaches’ poll, took an early lead and never relinquished it, handing No. 1-1A Mayer Lutheran a 25-21, 25-23, 25-21 straight-set loss on Thursday evening at Mayer Lutheran High School.

The Stars (16-6, 6-1), led by senior outside hitter Madeleine Lemkuil’s 12 kills and sophomore outside hitter Estelle Haugen’s 13 kills, put themselves in good position to challenge for the top spot in the Minnesota River Conference standings as they’ve been in a three-way race down the stretch with the Crusaders (19-2, 5-1) and No. 7-2A Belle Plaine, which also has one league loss.

Senior middle hitter Olivia Tjernagel, with 10 kills, and sophomore outside hitter Lilly Wachholz’s 12 kills, kept Mayer Lutheran competitive in each set but the Crusaders could never quite come up with a knockout blow. 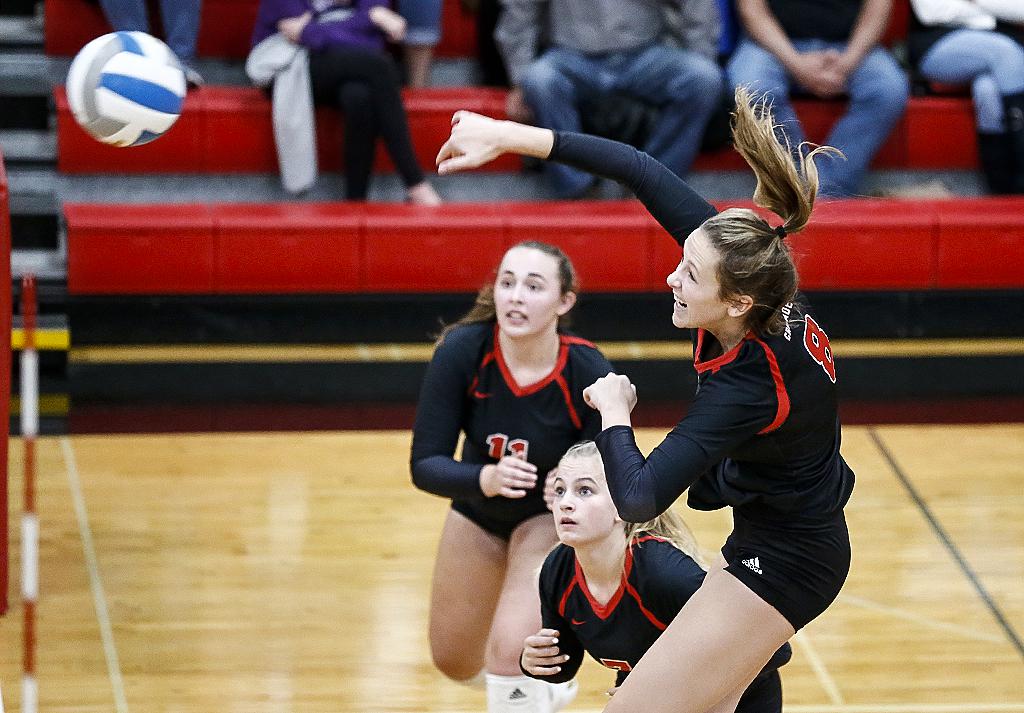 Olivia Tjernagel (8) hits one of her 10 kills in the match. Mayer Lutheran fell in three sets to conference rival Southwest Christian. Photo by Cheryl A. Myers, SportsEngine