The Vikings, who won last year's Class 2A state title, beat a fellow top-10 contender in the Stars at the Side Out Classic. 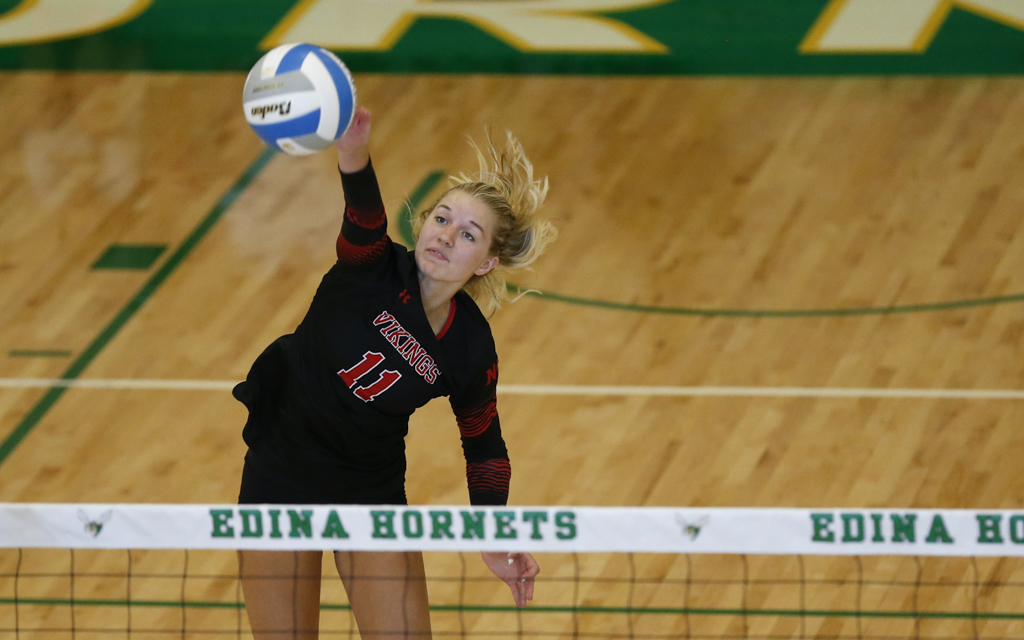 North Branch senior Cianna Selbitschka goes up for a kill against Southwest Christian during the Breakdown Sports Side Out Classic at Edina High School. The Vikings defeated the Stars in five sets. Photo by Jeff Lawler, SportsEngine 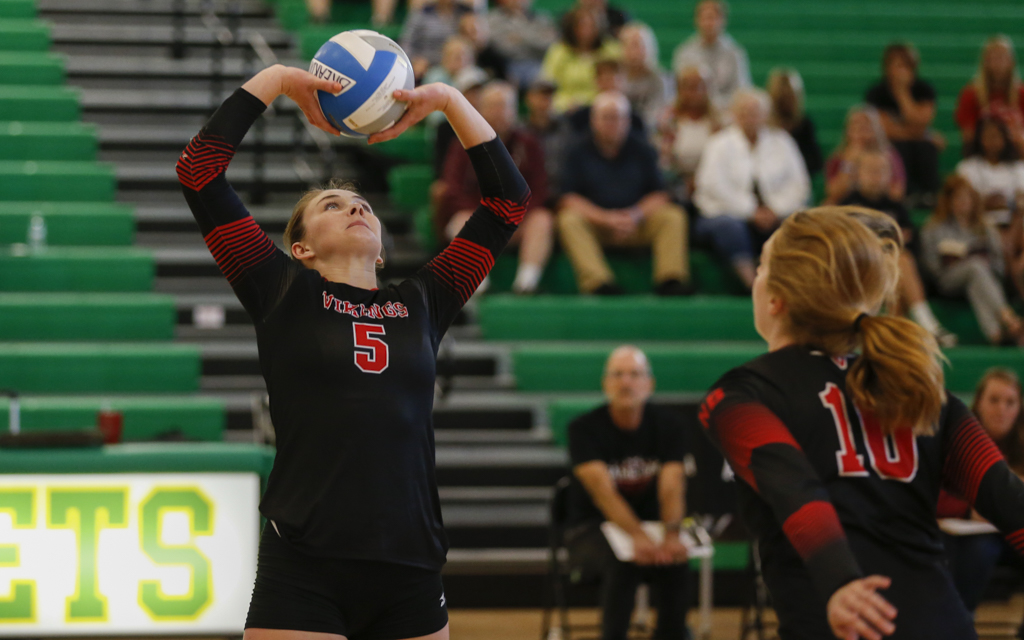 North Branch junior Paige Sheehan sets up a play at the net against Southwest Christian during the Breakdown Sports Side Out Classic at Edina High School. The Vikings defeated the Stars in five sets. Photo by Jeff Lawler, SportsEngine

When North Branch took the court against Southwest Christian Saturday, everyone on both teams knew the Vikings’ offensive attack would flow through senior standout Cianna Selbitschka.

So North Branch, the defending state champion in Class 2A, knew it would need contributions from others to help win. The Vikings got just what they needed to claim a 23-25, 25-19, 21-25, 25-15, 19-17 victory in the Breakdown Sports Side Out Classic at Edina High School.

"If we get other options, the other team can't set up right in front of me," said Selbitschka, a Minnesota Duluth commit. "If they do, we have other players who can make big plays."

Selbitschka was a force, finishing with a game-high 29 kills which proved vital considering the Vikings were without middle hitter Reagan Irons, who missed the contest to attend a family event.

North Branch (2-0, 0-0) supplemented its attack with standout efforts from Paige Peaslee and Kristi Pilz who each had seven kills. Setter Paige Sheehan contributed with 43 assists.

"I thought Kristi Pilz played great; she stepped up when she really needed to, taking great swings and great shots," Selbitschka said. "I thought Paige Sheehan stepped up and got to where the ball was, then made sure the sets were hit-able by us."

Those contributions allowed North Branch, ranked No. 2 in the coaches’ association’s Class 2A preseason poll, to knock off No. 9-2A Southwest Christian.

"Everyone knows the high percentage of the sets are going to go to [Cianna], but I love that we have other options out there," Vikings coach Mike Selbitschka said. "We have some older kids who will get a chance to contribute as well.

"Whether we won or lost, we knew we would learn something from this match. They're a great team, so we had to bring everything we had to beat them."

"I'm proud that in both sets that we won, we were in fairly deep holes — but we kept our cool, stayed disciplined, and dug our way out and found a way to win," Southwest Christian coach Greg Sayuk said.

In the second set, Cianna Selbitschka had three kills in the first five points to lead the Vikings to a 25-19 win. In the fourth, she added seven kills as North Branch forced the decisive fifth set with a 25-15 win.

"I try to mix up my shots, sometimes hitting from a little closer," Cianna Selbitschka said. "But I always work on staying tall, so even if there's a block in front of me I will be hitting over them."

There were seven ties in the decisive fifth set as both teams raised their games. At one point the teams combined to score 12 straight points on kills — North Branch collected seven kills, while Southwest Christian had five.

"To have a match at this point in the season that was fairly well executed, with both teams taking big swings at big moments, was pretty impressive," Sayuk said.

But North Branch, which twice faced match point, got a kill from Cianna Selbitschka and a block from Pilz to stave off defeat and set up a match point of its own, then forced a kill error to close out the victory.

While it is hard to imagine Southwest Christian will face a player as talented as Selbitschka again until playoff time, Sayuk thinks the chance to face her to start the season will help his team in the long run.

"That's what we practice for," he said. "We don't practice for the bad teams and make adjustments for the good ones; we practice to prepare to face the good teams. This is the kind of match we want to play, because this is how we'll get better." 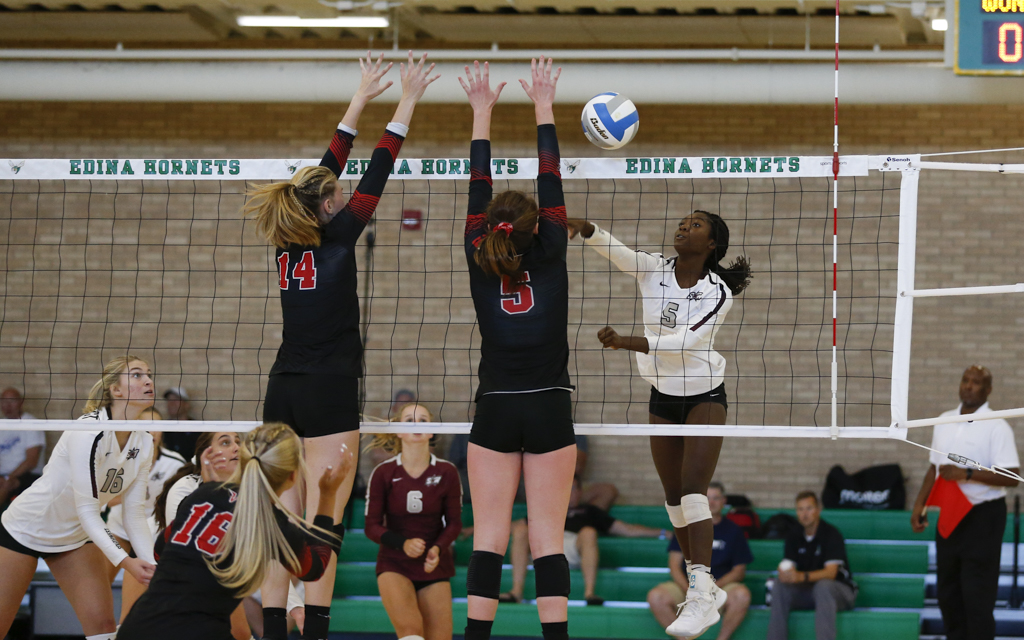 Southwest Christian's Callie Coughlin sends a shot past two North Branch defenders during the Breakdown Sports Side Out Classic at Edina High School. The Stars fell to the Vikings in an entertaining five set match. Photo by Jeff Lawler, SportsEngine